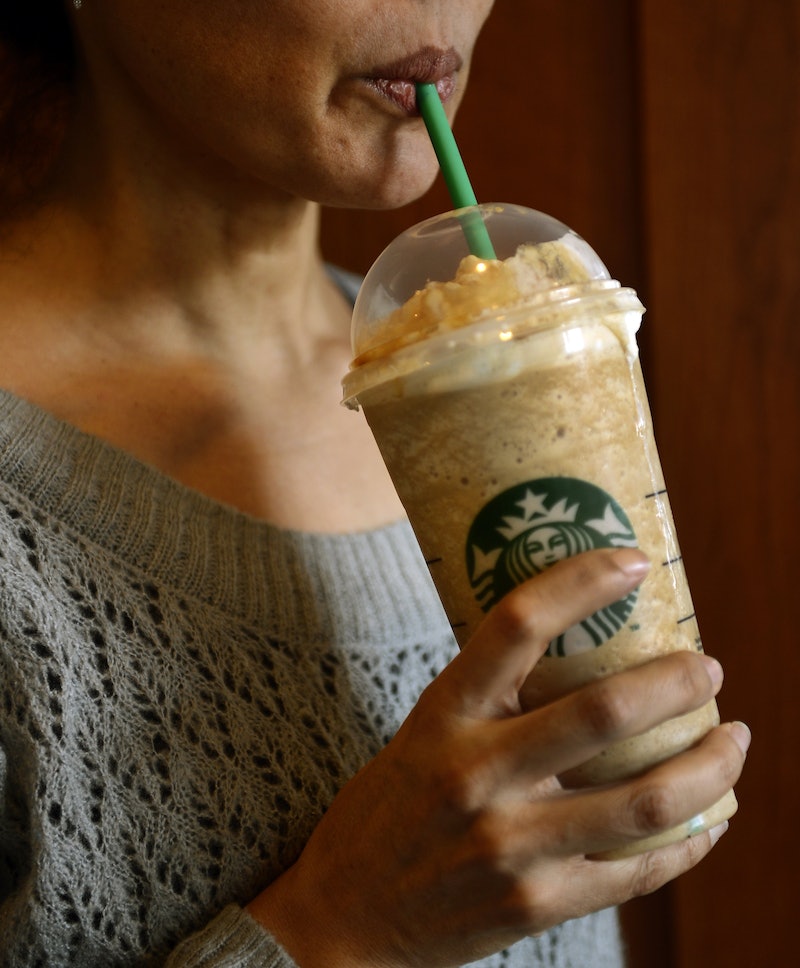 The lead-up to the winter holidays is paved with parties and planning; as fun as it is, you'll likely be overwhelmed and in need of some serious seasonal spirit lifting before you can say "eggnog," right? But thankfully, Starbucks' seasonal beverages are back to pep us up. So, do the Starbucks holiday drinks have caffeine? Well, the short answer is yes; they're coffee-based, of course, and coffee naturally contains traces of caffeine. But the real issue is, how much? Because even though we're all super busy right now, it's important to make sure we don't overdo it in terms of caffeine consumption and end up even more on edge and stressed out. In small doses, though, a Peppermint Mocha can be delightful, particularly at this time of year.

First of all, how much caffeine is too much caffeine? The Mayo Clinic recommends a limit of up to 400 mg of caffeine a day for most healthy adults. "That's roughly the amount of caffeine in four cups of brewed coffee, 10 cans of cola, or two energy shot drinks," they advise. Luckily, one of our favorite seasonal beverages from Starbucks won't make too much of a dent in our daily caffeine allowance; the 12-ounce Tall Chestnut Praline Latte, Eggnog Latte, Gingerbread Latte, Caramel Brulée Latte, and Skinny Peppermint Mocha each contain 75 mg of caffeine. Meanwhile, a regular 12-ounce Tall Peppermint Mocha comes in with a little more at 95 mg of caffeine.

So how do the majority of the Starbucks seasonal drinks stack up against all those other caffeinated things we like to eat and drink? Well, let's see: The Starbucks holiday drinks with 75mg of caffeine contain...

Less Caffeine Than An Average Cup Of Coffee

Your average cup of joe is pretty caffeine-heavy; so most of the Starbucks holiday drinks measure up better if you're watching your caffeine intake. On average, a brewed 8oz cup of coffee contains a surprisingly hefty 95 to 200 mg of caffeine, according to the Mayo Clinic. This means at the high end of the scale, you could drink both a Starbucks Caramel Brulée Latte and a Skinny Peppermint Mocha and still have consumed less caffeine than is in a cup of coffee with 200 mg of the stuff.

More Caffeine Than Your Tea

Your brewed leaves are always going to come out tops in comparison to Starbucks drinks, when it comes to caffeine. For example, green tea typically only has between 24 and 45 mg of caffeine per cup, and a cup of black tea has around 14 to 70 mg.

More Caffeine Than Your Favorite Soda

Surprisingly, sweet carbonated drinks are actually a decent source of caffeine — but not as decent as Starbucks. A can of cola contains around 35 mg of caffeine.

More Caffeine Than Your Favorite Chocolate

Did you know some chocolate is fortified with caffeine for an additional energy boost alongside all that sugar? Buzz Bites Chocolate Chews are marketed as energy chocolates and contain a whopping 1,639 mg of caffeine per 100 g. But even our regular sweet treat favorites can be secret caffeine-boosters; each Hershey's Kiss, for example, contains one mg of caffeine per piece, and the Snickers Charge (a limited edition chocolate bar from 2008) contained 60 milligrams of caffeine per bar.

Less Caffeine Than An Energy Drink

If you're a lover of energy drinks, then you'll already know they pack quite a punch when it comes to caffeine. Caffeine Informer has a whole table comparing the caffeine in energy drinks, but some of the worst offenders include Rage Inferno, which contains a huge 375 mg of caffeine per 24 ounces., and Red Line Power Rush, which contains 350 mg for just 2.5 ounces!

More like this
How Long Does Leftover Stuffing Last? Here's When To Toss It
By Chelsey Grasso and Alexis Morillo
16 Friendsgiving Recipes Your Besties Will Love
By Alexis Morillo
35 Genius Secret Santa Gifts For Someone You Don’t Know Very Well
By Rebecca Deczynski and Lauren Grant
35 Holiday Trivia Facts That Will Impress Your Guests This Year
By Lauren Grant and Emma Carey
Get Even More From Bustle — Sign Up For The Newsletter