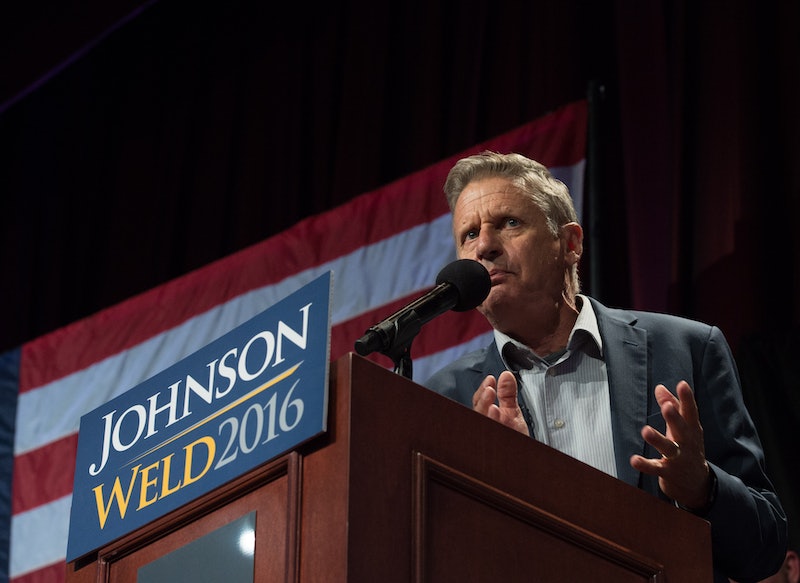 Nobody expected Gary Johnson to win this election, including Johnson himself. The Libertarian candidate always had a national average of support below 10 percent, according to RealClearPolitics, a number much too low to give him a legitimate chance. In the days preceding election night, FiveThirtyEight's election forecast predicted Gary Johnson would win less than 5 percent of the popular vote; his highest point was July 17, when his percentage went up to 9.2. Regardless of his chances never having been plausible, it's interesting to see how many votes he managed to garner in the end. According to Wednesday morning results with 97 percent of areas reporting, he finished the race with just over 4 million votes, or 3 percent of the popular vote.

Throughout the election, Johnson and Green Party nominee Jill Stein, the other notable third party candidate running — who finished with just over one million votes — were primarily discussed in three contexts. First, in conversations about whether or not the two-party system is not effective; second, in talks characterizing them as last-ditch options for Americans too disenchanted to vote for Donald Trump or Hillary Clinton; third, in analyses trying to calculate how much their numbers were cutting into Trump's and Clinton's.

Johnson occasionally garnered some additional attention, mostly negative, for gaffes like not being able to name a single world leader, not knowing what Aleppo is, and not knowing who Harriet Tubman was. During debate season, there was also a fair amount of discussion in the media and on social networks regarding whether the voter threshold third party candidates must meet in order to participate is too high — Johnson's campaign website had a petition asking for the opportunity to take part.

His numbers also seemed to indicate an easier time courting young people than his opponents, with 39 percent of his voters being under 30, and 71 percent being under 50. When it came to racial diversity, the majority (79 percent) of Johnson's electorate was white.