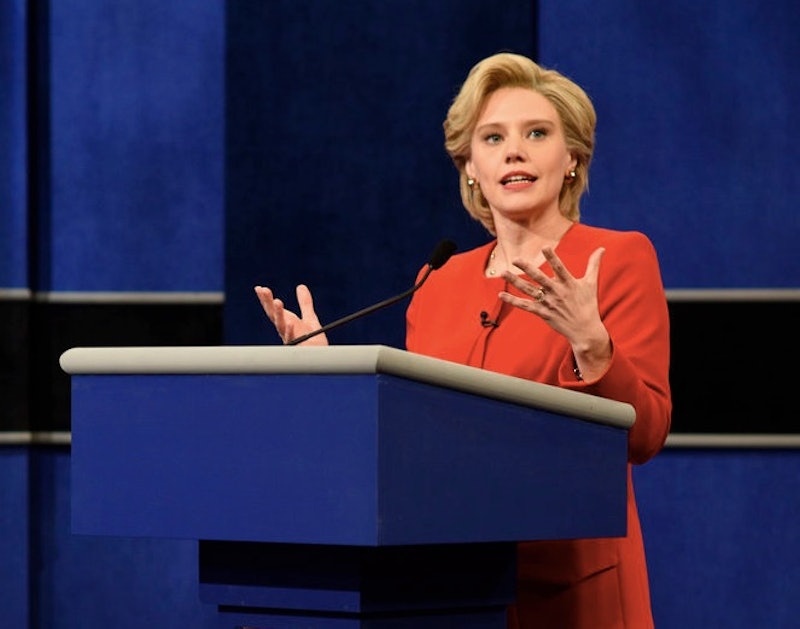 Since its very first season, Saturday Night Live has been parodying politics. It all began in 1976, when Chevy Chase introduced his widely discussed Gerald Ford impression, in which the comedian did pratfalls to mock the president's real-life clumsiness. In the decades since, SNL has been deemed capable of influencing presidential election, but is that really true? Can a variety series impact the highest office in our nation? (NBC had no comment on SNL's effect or lackthereof on elections.) Though SNL has been credited as a political influencer, the numbers, which you can see in a graph below, tell a different story. After comparing candidate polling numbers before and after they were parodied on the show, along with public perception of the person vs. their portryal, I found that it's usually not a large factor in voter decisions. But, that doesn't mean that politicians don't take Saturday Night Live seriously.

This year, Republican nominee Donald Trump commented on SNL's parody of him, tweeting, "Alec Baldwin portrayal stinks," and he's not the only politician who has spoken about SNL. In fact, the show's very first target, expressed discontentment, as Chase claimed in a 2008 interview with CNN that Ford's autobiography mentioned that the impression "had an effect over a period of time that affected the election to some degree." Though I was unable to find that exact quote, Ford's autobiography, A Time To Heal, does address the jokes made about him on SNL.

"The news coverage was harmful ... But even more damaging was the fact that Johnny Carson and Chevy Chase used my missteps for their jokes," the president wrote. "Their antics — and I'll admit that I laughed at them myself — helped create a public perception of me as a stumbler. And that wasn't funny."

Chase also told CNN in the same interview that, as a Carter supporter, he recognized that SNL was "reaching millions of people every weekend, why not do it." A year later, Chase changed his tune, telling The Denver Post that parody doesn't actually affect elections. "Anybody can reach anywhere from five to 15 million people weekly, making a president look like an idiot as I did back then or Tina Fey did with Sarah Palin," he said. "You’re always preaching to the choir one way or the other."

One study conducted after the 2008 election cycle, which included Fey's infamous portrayal of Palin, did find that SNL had a marginal effect on the election. According to PR News Wire, after conducting a survey of 1000 voters, FirstView (a national public opinion survey released by Roll Call) found that "10 percent of voters said they were influenced by the skits." Of that group, "Six percent of respondents indicated the skits made them more likely to vote for Obama/Biden and four percent said the SNL skits made them more likely to vote for McCain/Palin." And overall, the survey report that "59 percent of those who saw the skits voted for Obama and 39 percent voted for McCain."

This was the only study of its type conducted, but there are other ways SNL has affected politics. After Will Ferrell coined the phrase "strategery" while playing George W. Bush, the word made its way into the political lexicon and even into the real Bush's vocabulary, according to a 2001 interview with CNN. Pulitzer Prize-winning journalist Ron Suskind reported that Bush's team created the department of “Strategery,” or the “Strategery Group,” which meant "the oversight of any activity — from substantive policy to ideological stance to public event — by the president’s political thinkers." And, though Fey's famous line "I can see Russia from my house," was not spoken by Palin prior to that SNL skit, the former governor did jokingly use it more than once during her TLC reality show after the election.

So there have been times when SNL has been cited as having an effect on politics and even on elections, but was the influence larger than these few examples? Using a comparison of real public perception to SNL's portrayal, and the average of Gallup's polling numbers from August (before SNL's fall season began) and October (during the season), Bustle created this chart to mark any effect it might have had.

Interestingly, a majority of the SNL parodies simply reflected what the public already thought about a candidate. For example, the show's long-winded, flip-flopping version of John Kerry was accurate to how the candidate was already being described in the media. Chase's bumbling Ford was a reflection of a president who journalist John Osborne described as "a loser, a bumbler, a misfit President who for some reason or other ... was prone to slip on airplane ramps, bump his head on helicopter entrances, entangle himself in the leashes of his family dogs, and fall from skis in front of television cameras that showed him asprawl in snow."

However, there were also times when SNL's version of a president differed from their previous public image. People viewed Bush rather favorably in 2000, seeing him as an honest person with integrity, according to the Pew Research Center; SNL portrayed him as clueless. It also took the public's initial view of Palin as politically inexperienced and exaggerated it to an extreme, portaying her with ditzy behavior. Palin has taken issue with the portrayal in years since and said in James Andrew Miller's oral history of SNL, Live From New York, "I know that they portrayed me as an idiot, and I hated that."

Still, on the whole, poll numbers rarely show a drastic decrease from before SNL portrayed a candidate to after. It was more common for both candidates' numbers to increase or decrease in tandem, perhaps as the election neared and people started paying more attention. Any dips in numbers were small; McCain's fell only one point in October after SNL started its Palin portrayal. Ford's numbers, meanwhile, actually rose 11 points despite Chase's pratfalls.

In an election, every vote counts, but it's hard to quantify just how many of those votes (if any) SNL is responsible for changing. When poll numbers rise and fall, there are many factors at play, and most likely involve the actions of the actual candidate more than their on-screen caricature.

But, there's no denying that viewers take SNL seriously. People still talk about Chase's Ford impression and Fey's stint a Palin. Trump tweeting about his portrayal speaks volumes too. With all of those eyes on SNL, it does have a responsibility to its viewers to not skew the personalities of the people it impersonates too far. There's nothing wrong with parodying parts of a person that already stand out, or mocking a real quote and the way it was said. There is always room for humor in politics, so long as it's being carried out in a thoughtful way. SNL has, for the most part, mastered this and will surely continue to reflect the public's thoughts on politics in a funny and resonant way.