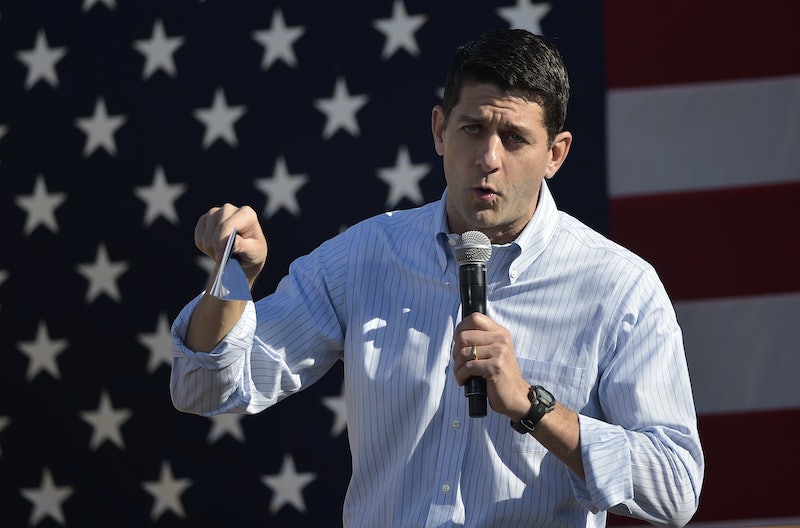 While most election talk has centered on the candidates at the top of the ticket — and rightfully so — there are more results than the presidential outcome to pay attention to on Election Day. The House of Representatives faced a potential shake-up, as many key members of the Republican majority fought to keep their party's control alive. From Tuesday's results, it looks like the Republicans will keep control of the House, although it was still too early to tell if they'd gain control of the White House.

Leading up to Election Day, there were perhaps more questions about the ramifications of the House results than about the White House results. How would Donald Trump's unconventional campaign impact the so-called "down-ballot" races of Republican incumbents and challengers? Would Paul Ryan maintain his speakership? Would the Republican Party maintain a majority? The House had seemed to be a safer bet for Republicans than 1600 Pennsylvania Avenue, but it wasn't a done deal until Tuesday's results were revealed.

With 435 House members total, a party needs at least 218 members to hold more than half of the seats. Not to mention, all 435 seats were up for grabs on Election Day, and, according to Mic, expert forecasts largely considered many of the Republicans' seats safe.

In the Senate, Republicans had also fought to maintain their majority. The majority there was not as quickly called, although both parties boasted some key wins early on in the night. For one, Rep. Tammy Duckworth of Illinois, a Democrat, won election to the Senate, while Sen. Marco Rubio, a former presidential candidate and Republican from Florida, won reelection to his own Senate seat.

With the 2014 midterm elections, the GOP won its largest majority in the House since 1930. Along with control of the Senate, the GOP's majority has helped it to resist the Democrats' White House. Most recently, for instance, Congress voted in September to override President Obama's veto of a bill that would allow American victims of 9/11 to sue the Saudi Arabian government. Although, as Reuters reported, many Democratic members of Congress sided with their Republican counterparts to push the bill through the House with a vote of 348-77.