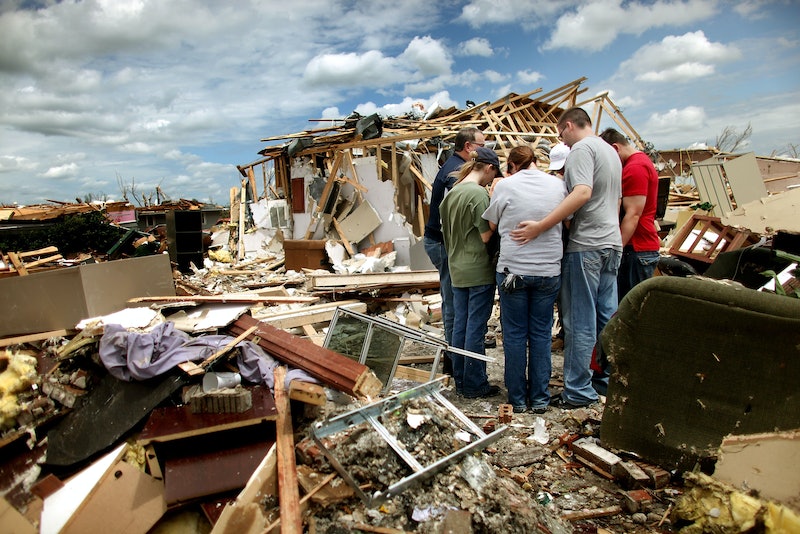 The devastation that comes with an unexpected tragedy may not all be psychological: New research indicates that the stress of natural disasters can literally break hearts. Takotsubo cardiomyopathy, also known as "broken-heart syndrome," weakens the heart's left ventricle and temporarily enlarges the organ. After two recent natural disasters in Vermont and Missouri, researchers pinpointed those incidents as a possible trigger for an increase of the condition in the region.

It's known that emotional or physical stress can trigger the syndrome — reactions following the sudden loss of a loved one, for example, can cause physical damage to the heart. Researchers at the University of Arkansas discovered significant rises in Takotsubo cardiomyopathy following a storm in Vermont and a tornado in Missouri. Previous studies have linked the condition to disasters such as the 2004 Japanese earthquake.

Using nationwide patient information, researchers identified 21,748 cases of broken-heart syndrome in 2011, and found the rate in Vermont was more than double most other states. This was the same year Tropical Storm Irene devastated the area.

High rates of the condition, at 169 cases per one million people, were also found in Joplin, Missouri. This is where a twister killed at least more than 150 residents and wiped out neighborhoods. However, most states had fewer than 150 cases per million people.

"It's a perfect example of our brain-heart connection," said Sadip Pant, the study's lead investigator, in a press release. "The emotional stress we have in our brain can lead to responses in the heart, and not much is known about this condition."

Symptoms of Takotsubo cardiomyopathy include chest pain and shortness of breath. While most cases are resolved within a month, the condition can result in heart failure and stroke. Pant said doctors and emergency medical personnel need to be aware of the the possible link since they are often on the "frontlines...after disaster strikes."