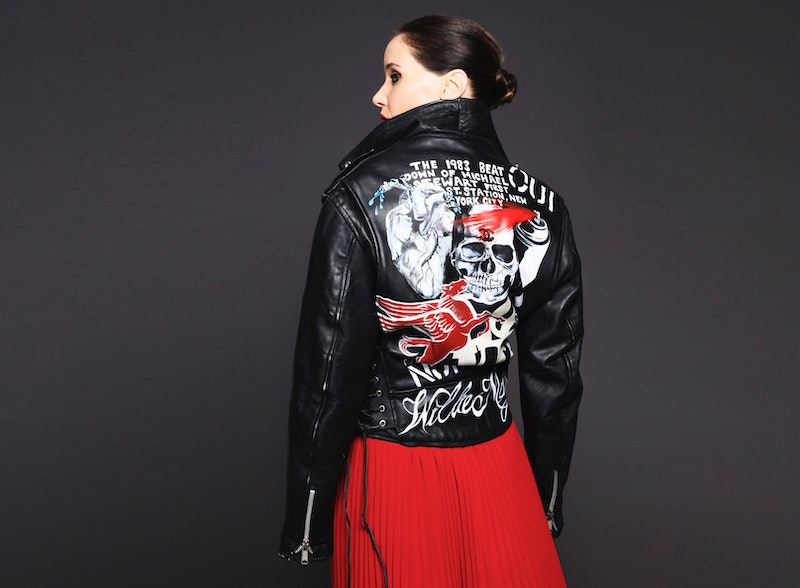 Most artists start with a blank canvas. Dana Louise Kirkpatrick uses whatever she can get her hands on. Known for her intriguing use of mixed materials, Kirkpatrick’s impactful artwork utilizes everything from old newspaper to leather jackets. Her ability to create art on just about any medium has earned attention from key players in the fashion and beauty industry, who have worked in partnership with Kirkpatrick to leverage her powerful designs for their campaigns. But it might surprise you to know that the artist’s trademark use of avant-garde materials actually started out of necessity.

“I drove the alley that runs behind Melrose Avenue picking up doors, shutters, whatever,” she tells Bustle. “I used whatever I could. It's just blank space and a surface. Doesn't matter if it's a door you have to hose off or a bolt of gorgeous canvas.” Kirkpatrick’s art moves spectators, taking you somewhere unexpected — just a few of many reasons why we chose to profile her for "Crafts Undiscovered," a series created in partnership with Don Julio.

Don Julio González, founder of the luxury tequila brand Don Julio, also started with nothing. With no funds of his own to fuel his dream, González convinced a businessman to give him a loan, allowing him to bring his dream of distilling tequila to life — and his hard work paid off. Today, Don Julio tequila is the most consumed high end tequila brand in Mexico, and one of the fastest growing in the U.S. And it's still made in that very same distillery González founded back in 1942.

Kirkpatrick's work has made her a trailblazer in her industry, and this sets her apart from any traditional artist in the space. Here’s what Kirkpatrick has to say about honing her craft, her creative process, and doing things differently.

When you’re working in a field that’s creative and highly competitive, blending in is the worst thing you could do for your career. But for Kirkpatrick, creating her signature style wasn’t a process that involved keeping an eye on her competitors. “I don't care what anyone else is doing,” she says. “I don't pay attention to the trends much. I just do what I do. At first you start by mimicking other artists, but this isn't conscious. You’re just learning, responding, destroying, reinventing, and scratching the surface for air. Then that form of self-education and apprenticeship dies off, and the work merges into a thousand things at once and becomes distinctly your own. It blooms, I guess. It's sort of how all of us have our own stride, cadence, or handwriting. I just make certain lines. It was never a strategy.”

“I never set out to do this as a business,” Kirkpatrick says. “I painted a leather jacket for my friend — she wore hers on a late-night talk show. I started making a few more. The first thing a number of people said when they saw images of the jackets was, ‘I hope you're charging a lot for those,’ and, ‘you're getting paid for these, right?’ Here I was, just creating in a space free of commerce, because I wanted to make them just simply to make them.”

"Something just wells up inside me and explodes."

“Something just wells up inside me and explodes,” Kirkpatrick says about her creative process. “Sometimes I work for hours without stopping, stand back and don't even remember making the work. Vulnerability and injustice seem to consistently trigger a response [for me] creatively. I feel an overwhelming ache in the center of my chest when I see something unfair — and then it just sort of explodes. I’ll open a huge Picasso book or tear out a page from da Vinci renderings to see how they handled composition if I get stuck. I want what I see in the world to change. I'm trying to solve the things that I can’t stomach. To make the ugly exquisite. I feel too much empathy, I think.”

Kirkpatrick doesn't get caught up in the process of selling her art, allowing her to do her work relatively unencumbered.

“I detest the business of art," she says. "I am tethered to the unapologetic making of it. All I want is to get better. I'm competing with myself. People can take it or leave it. There are months when nothing sells. That cannot be the endgame. If I focused on that piece — on people profiting on my talent, on big-name collectors haggling on the price of a drawing for their fourth home, I would throw myself off a bridge. I just keep making art.”