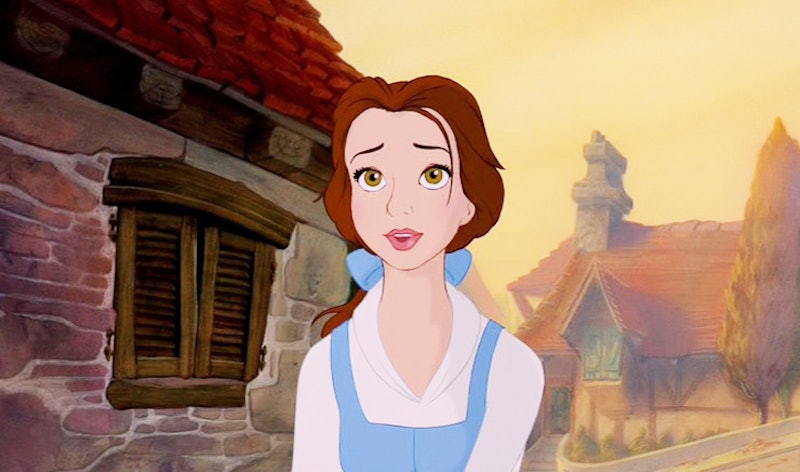 Emma Watson is a glowing Belle on the cover of Entertainment Weekly, which is teasing an upcoming spread that has already given us new images from Disney's live-action Beauty and the Beast . The actress spoke to the magazine about her role in the upcoming live action remake of the Disney classic, and your inner child is about to weep.Because let's face it, Emma Watson is perfect for the role. She's one of the most famous brunette beauties on the face of the planet, like bookworm Belle, she's so into literature that she's, as of today, basically a book fairy, hiding books around public transport in London, and her resume proves (like you didn't know already?) that she's a seriously smart cookie.

She studied at Brown, she's the UN Women Goodwill Ambassador and, as you probably remember, she delivered an address at the UN headquarters to launch the HeForShe campaign. Ladies and gentlemen, cast any lingering doubts aside. She is Belle, if Belle was born in modern-day Britain, broke into movies, and also pursued a modelling career on the side. Don't believe me? Then peep her stunning Entertainment Weekly cover, and try to keep the tears in as your entire Disney-based childhood comes to life before your very eyes.

In one of the stills of the Entertainment Weekly article, we can see an Emma Watson quote writ large: “We tried to make Belle more proactive and a bit more in charge of her own destiny.” The "we" is interesting, implying that Watson had as much input as those behind the cameras into her role.

This is supported by a quote from costume designer Jacqueline Durran in the above still, who also suggests Watson took an active interest in the character development of Belle when she tells Entertainment Weekly: “For Emma, it was important that the dress was light and that it had a lot of movement… In Emma’s reinterpretation, Belle is an active princess. She did not want a dress that was corseted or that would impede her in any way.”

This also seems to be communicated by the way Belle's hair is also often clipped back or tied up: this feels like a graceful but practical look for a Disney princess who has been more concerned with internal substance than external appearances.

And we got to check out just one more still, which also shows us the contrast of Belle's dainty stature with the CGI-enhanced Dan Stevens, who, with the help of some stilts, plays the Beast:

While I love Watson's reinterpretation of a stronger, more in control Belle, I'm relieved to see that Disney has stuck with the iconic blue and white costume that we all know and love Belle for. After all, in the words of Cogsworth, "If it's not Baroque, don't fix it."