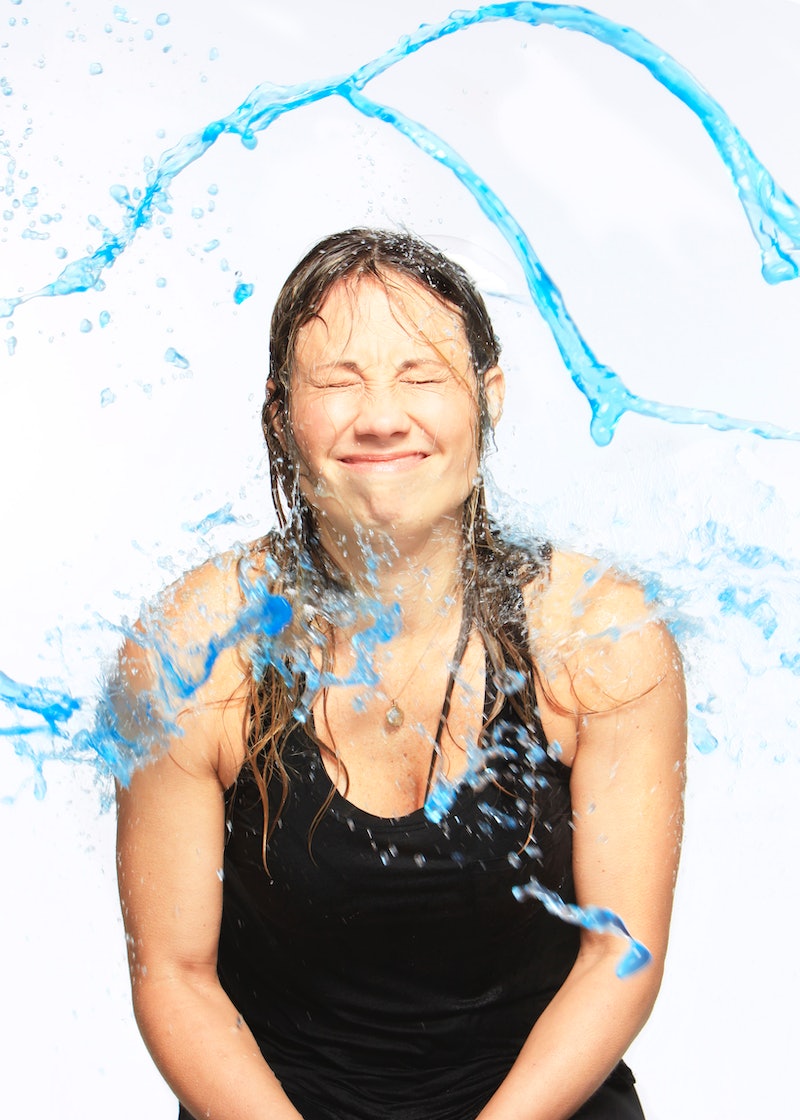 Being well-rounded and competitive will give you an edge in just about any industry. For Davina Thomasula, these characteristics earned her a reputation as one of New York City’s top mixologists. “I got behind the bar and I literally never left,” Thomasula tells Bustle. “I always wanted to cook as well, and I ended up going to culinary school, but I didn’t want to leave the bar. So I just started doing my recipes behind the bar, while incorporating the techniques that I learned from cooking into my cocktails.”

But on occasion, her competitive spirit does take her out from behind the bar, whether she's participating in a local cocktail challenge or serving as a contestant on a hit cooking show. “I love to compete, and I do think it gives you an edge,” she says. “If you’re competitive, you want to stay competitive. There are so many people who do what you do, so you need to stay competitive to get ahead.”

Thomasula’s unrelenting spirit and innovative cocktail creations made her a no-brainer for Crafts Undiscovered, a profile series we've created in collaboration with Don Julio. The series is inspired by Don Julio González, the founder of Don Julio, who started distilling tequila in 1942. He wanted to stand out amongst the other tequila distillers in his country, so he created new techniques to do so — like planting his agave further apart to give the plants more room to grow, resulting in a sweeter taste and a smoother tequila. Today, Don Julio is the most consumed high-end tequila brand in Mexico, and one of the fastest-growing in the U.S.

Here’s what Thomasula has to say about how to stand out as a mixologist, her unique cocktail creations, and her process for coming up with new recipes.

“You can teach almost anybody to make a drink, but that sense of showmanship adds to your style."

What has become a fulfilling career for Thomasula actually started out of necessity. “I decided to move to New York and figure out what I was going to be when I grow up,” she says. “I got here and got behind the bar, and I thought it was just going to be a temporary thing. But the longer I did it, the more I realized: I have a place here. And it became more of a career. I didn’t realize how many things you could do besides just bartending in the spirits industry.”

As for standing out in the field, Thomasula says that your presence is just as important as your cocktails: “You can teach almost anybody to make a drink,” she says, “but that sense of showmanship adds to your style. Mixology is amazing and it’s definitely a craft, but I also think you have to have the other aspect, and also keep a humbleness about you. When you’re honest and relatable, it adds to your style.”

Thomasula’s process for creating new drinks channels her culinary training, and she draws on seasonal inspiration.

“A lot of it comes from cooking,” she says, “and a lot of it comes from my local farmer’s market. Sometimes I’ll just say, ‘Oh this looks good today, let’s make a drink with it.' I like to use simple ingredients, and I think it’s great to pair them with stuff you wouldn’t normally see in a drink. I like to use things that are kind of out of the box — challenging myself to see if I can make a cocktail with it is kind of fun. But my cocktails are more food-driven than anything else, which is my style.”

What kind of out-of-the-box ingredients are we talking about? “I once tried a scorpion chili honey that tasted killer,” says Thomasula, “so I took that idea and infused agave with scorpion chili flakes, accompanied by cinnamon bark, to create this drink. The citrus notes in Don Julio really play well in mixed cocktails, so it was a natural choice to add some fresh lime and blood orange juice. As for my garnish, I dehydrated some blood orange wheels to play off the concept of 'heat' in the cocktail.”

“A lot of people don’t realize you can make a career out of something you love if you love it enough.”

“A lot of people don’t realize you can make a career out of something you love if you love it enough,” says Thomasula. “It’s not an easy industry by any means. But there’s so much out there for mixologists and bartenders that wasn’t there when I first started out. I feel like the industry has definitely changed. If there’s something that you like and you’re into it, I feel like you can make a career out of anything in the world.”