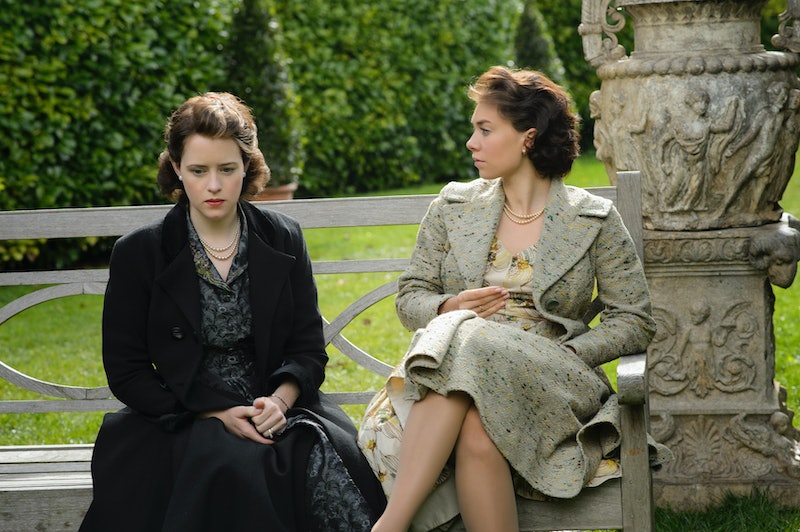 When many people think of the British royal family, they might think of Princess Diana, William and Kate, and most recently the potential relationship between Prince Harry and Meghan Markle. However, the first season of The Crown on Netflix is about Queen Elizabeth when she was first coronated, and her generation of royals. That includes Elizabeth's sister, Margaret. What was Queen Elizabeth and Princess Margaret's relationship like in real life? The Crown shows both the conflict and the love between them. Bustle reached out to the royal press office for further comment on the sisters' real relationship and the show's portrayal and was provided this statement: "The Crown is a fictional drama. The Royal Household has had no involvement."

According to Vanity Fair, they were extraordinarily close growing up. Margaret called her sister "Lilibet," and they had a direct line between Buckingham Palace and Kensington Palace. The article, written by royal family friend Reinaldo Herrera, also describes Margaret's funeral in 2002 as one of Queen Elizabeth's only public displays of emotion.

In 1955, when Margaret was free to marry Peter Townsand, a divorced Captain in the Royal Air Force which would mean abandoning her royal position, Elizabeth refused to comment or interfere, according to The Telegraph. However, the two sisters reportedly fought, and Margaret had a wild and rebellious reputation, though that was almost certainly exaggerated by the press at times. This likely began at an early age, when, according to The Telegraph, Margaret was allegedly spoiled so as to make up for the fact that her older sister was clearly going to be Queen. The family also allegedly tried to diminish the four-year age gap between the two girls, which allowed Margaret to grow up prematurely.

The Telegraph also reports that one of Queen Elizabeth's catchphrases, so to speak, was to allegedly "ruefully" sigh, "Oh Margo!" Despite any conflict the sisters may have allegedly had behind closed doors, per The Telegraph, by all accounts Elizabeth reportedly felt sorry for her sister — who had a life of privilege and income, but not a lot of personal freedom or purpose.

While The Crown might dramatize any jealousy or betrayals, I think it's clear that they loved each other. Nothing is "normal" when growing up in the public eye and with a royal title, but family ties are hard to break.