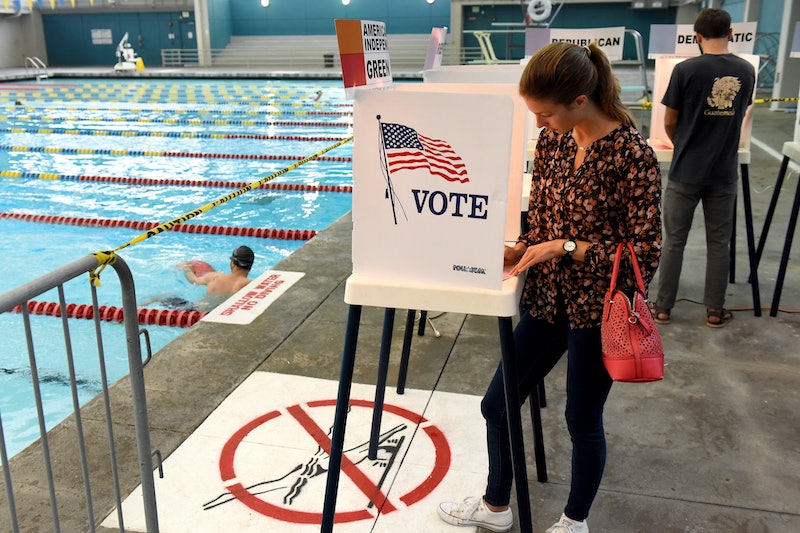 A new report from the Williams Institute estimates that up to 34,000 transgender Americans could be disenfranchised by voter ID laws this year, primarily in "strict ID" states that require people to show acceptable government ID — which varies by state — at the polling place. These laws, ostensibly preventing "fraud" but really profiling people of color, didn't intend to snag trans people, but they're doing a mighty fine job of it; transgender people often experience a mismatch between who they are, what they look like, and what their IDs say about them, which is a recipe for challenges at the polls. In the conversation about voter identification and disenfranchisement, numbers like these are both infuriating and heartbreaking, especially when two of the states involved, Virginia and Wisconsin, are considered swing states.

For many cisgender people, using an ID is a kind of unremarkable thing — you've handed it to countless TSA agents, highway patrol officers, school administrators, and myriad other nosy people who want to glance fleetingly at a sheet of laminated plastic with your name and gender on it. Some of you may wear ID tags to work, or be required to swipe them to enter secure areas. It's just a formality.

So what's the problem? Can't trans people just change their IDs? They could, if we lived in a world where requirements for updating IDs were simple, basic, accessible, and rooted in the actual way people relate to their identities. Changing your ID to update your name and gender to make them consistent with your actual name and gender rather than those assigned at birth should be a matter of submitting a couple of forms to update the government on what you've been up to, à la those annoying family Christmas cards we all dump as soon as they arrive. Unfortunately, that's not how it works.

One person's goal or endpoint may not be the same as another's, and this is especially true for the growing numbers of non-binary people who are opting to transition, none of whom fit neatly within a M or F designation.

The thing about identification is that it's not just an administrative document — it is, as the name implies, proof of identity. And when your identity has changed, or is in a state of flux, the little cards the government hands out can either validate that identity, listing a name and gender consistent with who you are — or they can list the details of a dead stranger, someone so abstracted from you that being forced to pull out your identification feels like a violation, making you cringe when people look at your ID and back at you, puzzlement bubbling out of their mouths. Trans people with outdated identification are outed by virtue of the ID they carry, and they're constantly subjected to gender dysphoria, as well as flat-out denied access to things that are their right, like, say, the ability to cast a ballot, on the basis of the fact that their ID and visible appearance do not match.

One of the reasons I started going by my initials was because my birth name was so humiliating and upsetting. It felt like someone else's name, and I was constantly perplexed when I glanced at my ID and saw the wrong name on it — Who's that? When I changed my name, the first piece of new identification I got was my temporary driver's license, a smudged, flimsy piece of receipt paper, crumpled from the careless hands of the DMV representative who'd scanned my court order and paperwork warily, looking for some kind of mistake.

When the real thing arrived a few weeks later, it felt like Christmas in July, and as it was followed by a steady flow of bank cards, utility bills, and sundry other identifications, it was a sort of time lapse, as the person I actually was emerged from the ashes of that dead stranger who used to take up space. A few weeks ago, I was clearing out old paperwork and I was jarred to find that person's name, thinking as I shredded prior year tax returns that someone going through my filing cabinet would be deeply confused.

I was comparatively lucky. The State of California has made it relatively easy, though not inexpensive, to change name and gender markers on identification. It cost me around $1,000 between the cost of the court order — the work of a few scant moments in court as the judge looked over my paperwork and signed it — and the replacement fees for things like my passport and drivers' license. Changing gender markers in California requires little more than having a physician fill out a form or write a generic letter saying that you are receiving "appropriate clinical treatment." That's language borrowed from the U.S. Department of State, which updated its identification standards under Secretary of State Hillary Clinton to make it easier for trans people to update their IDs.

There's no reason not to adopt a basic, trans-friendly national standard when it comes to ID requirements, including dropping the surgery requirement and reconsidering whether gender markers are strictly necessary on identification in the first place.

But those forms are rooted in binarism; they assume that you're either a man or a woman, and may be conditional, reflecting transition "in process" or "complete," like you're the progress bar on a software update. This is, to be frank, pretty shitty, and it echoes an outdated notion of what "transition" means, as though it's a logical point A to point B progression with a clear start and end point. Many transgender people take hormones throughout their lives, for example — are we "in transition" because we're taking ongoing hormone therapy to make up for what our bodies don't produce on their own? One person's goal or endpoint may not be the same as another's, and this is especially true for the growing numbers of non-binary people who are opting to transition, none of whom fit neatly within a M or F designation.

But if you have the money, time, administrative literacy, and willingness to grit your teeth through the state's lack of understanding about the nuances of gender, it's "easy" to update your California ID, right down to your amended birth certificate. For low-income California residents and those who haven't been marinating in bureaucratic errata for most of their lives, it's rather more challenging, but shouldn't be.

Other trans people are not even so fortunate. Some states have extremely stringent standards for updating ID, particularly when it comes to gender markers. It's not uncommon to require proof of gender confirmation surgery, which is something that not all trans people want or can afford. It's also highly invasive and comes with the usual surgical risks, in addition to another big one: People who receive gender confirmation surgery are sterile, as the procedures involve removal of the testes or ovaries. States are engaging in coercive sterilization and claiming it's necessary for the integrity of identifications. Unsurprisingly, many states with ugly voter ID laws also have very complex processes for getting and updating that ID.

This is manifestly unfair. Voter ID laws are intrinsically unjust — but creating huge barriers to ensuring that you have identification that reflects who you are is also unjust and dehumanizing. All the more so because while including someone's name on identification is generally reasonable, there's typically no reason for a gender marker. Gender markers reflect society's desire to divide us into easily understood categories, and the notion that a M or F provides some kind of crucial information about someone.

That single letter on my ID didn't help the TSA agent at SFO who couldn't decide whether to call for a male or female pat-down and stood there awkwardly hoping I would help out, and it certainly doesn't help polling place workers in swing states with tough voter ID laws as they try to decide if people should be allowed to vote.

While issuance of state ID is by its very nature a state matter, there's no reason not to adopt a basic, trans-friendly national standard when it comes to ID requirements, including dropping the surgery requirement and reconsidering whether gender markers are strictly necessary on identification in the first place. It would alleviate a lot of pain and suffering, and save everyone a lot of paperwork.