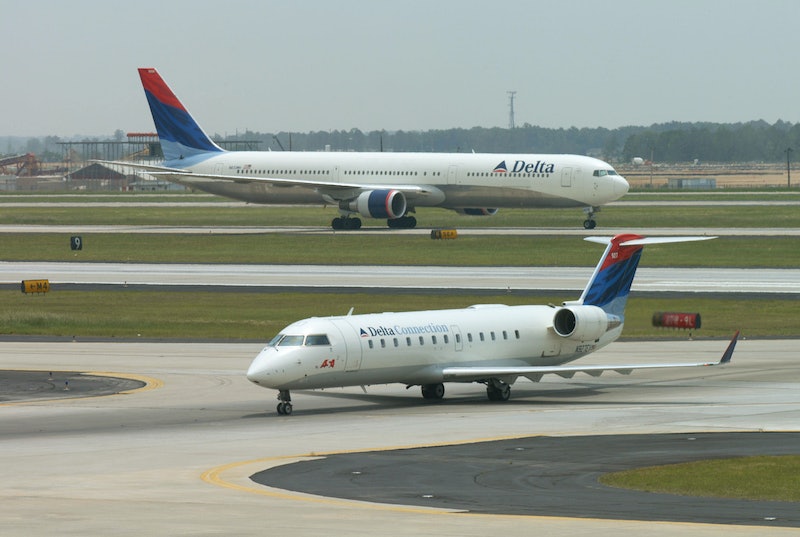 I know I've said before that long-distance relationships are the devil, and, for the most part, I believe that. (I've been in sooo many, you guys. So many.) But, as with any relationship, there are pros and cons to LDRs — which is why it can be surprisingly bittersweet when your LDR is "LD" no more. I had a lot to come to terms with when my boyfriend landed a new job and relocated to my city. To my likeminded love-knows-no-bounds-ers, consider my six discoveries below a heads-up — there's a light at the end of the tunnel, but it can be a little blinding at first.

Don't panic, it's not like sex entirely loses its appeal. But you will probably find yourself having thrice-a-day sex less frequently. This is not the worst thing in the world — thrice-a-day sex can chafe, folks.

2. The pressure is off to make every minute count.

You know that overwhelming wave of disappointment that crashes down on you every weekend when your time with the S.O. doesn't go as planned? You can gleefully bid that adieu! It's a bittersweet victory, though, because it also means that you have to work that much harder to carve out special moments. (How easy was that when simply seeing your partner was the special moment?)

The good news is that you and your partner can hang out and talk — like, IRL, F2F— all the time now. But what you'll soon realize is that your communication patterns need to evolve. It's time to take all of those late-night Gchats, weekend sext-a-thons, and phone-call fights, and figure out how to transpose those conversations into in-person interactions.

It sounds a little silly, I know. Talking is talking, right? But it's a little more complicated than that when the two of you are used to sharing certain thoughts in certain ways. Changing something as big as the way you communicate is bound to be a challenge — and that's OK. It's all about time and practice.

4. Shaving your legs is now a thing you have to do, like, often.

Or, if you don't shave your legs, substitute an equivalent grooming process that you went a little lax on in your partner's absence. It's not like you have to go all-out to impress this person who you've ostensibly been with for a few months at least... but, you know, showering regularly, that is expected.

5. You can go out on the weekends! (But you might have to bring your partner.)

Remember all of the miserable FOMO you suffered when your friends were always doing something really cool and fun every weekend you were away? Well, now you're around for the long haul, and, thusly, for the fun stuff everyone is up to on Saturday night.

You know that nice, quotidian routine it took you months to establish? Well, you're going to have to rework a big chunk of that now that your significant other is in town. Your calendar now needs to consider one-on-one time together, time together with friends, time alone with friends, and time alone. Plus, you'll likely have to adjust to not waking up in your own bed every day, including some weekdays (unless you're moving in together, in which case you'll have to make a hell of a lot more than six relationship tweaks).