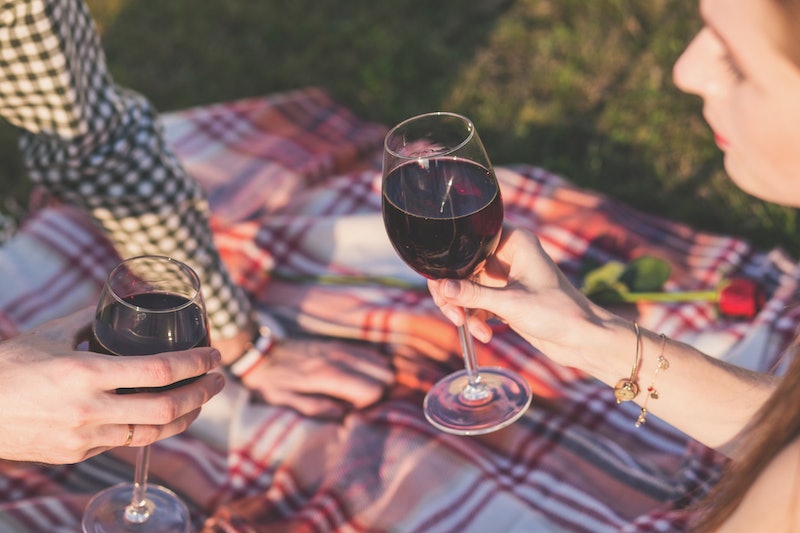 Getting sick from alcohol can happen if you drink too much, but if you're someone who has severe reactions after one or two drinks, you may actually be intolerant. Symptoms vary from person to person, but there are some clear signs your body is intolerant to alcohol that you need to know about. It's important to pinpoint an alcohol intolerance, as it can have some severe longterm effects over time.

"First, it’s important to note that it has nothing to do with alcoholism or addiction," says Dr. Russell Surasky in a phone interview. "It instead has to do with an individual’s genetic makeup. Some people are born with a deficiency of the enzyme acetaldehyde dehydrogenase (ALDH2) or the enzyme isn't functional. When it's not working properly and you drink alcohol, you get a buildup of acetaldehyde, and it's this buildup that causes symptoms."

It's also important to note that alcohol intolerance is different than an alcohol allergy, as the latter is much more serious, according to Healthline. Someone with an alcohol allergy has a reaction to an allergen in alcohol, such as barley, hops, yeast, etc., and these reactions can include stomach cramps, difficulty breathing, and even collapse.

If you an alcohol frequently don't mix well, you might want to consider these nine signs that your body could be intolerant to alcohol.

A stuffed or runny nose is one of the most common symptoms of an alcohol intolerance, according to Mayo Clinic. Nasal congestion is the result of inflammation in the sinus cavity, according to Livestrong. "This is also due to high levels of histamine found in alcoholic beverages, especially wine and beer," says Dr. Christopher Calapai over email.

Skin flushing is another extremely common symptom of an intolerance. "The speculation on this is that it's caused by a rise in blood pressure due to the ALDH2 gene deficiency," says Calapai. "When the body can't break down acetaldehyde, that redness appears on the face and sometimes throughout the body."

An alcohol intolerance can lead to warm, itchy bumps on the skin, also known as hives. This again is a result of a ALDH2 deficiency, but it can also be from histamines in your drink or allergies to specific ingredients, according to Everyday Health.

It's no surprise that alcohol intolerance can lead to feelings of nausea. "This is attributed to an increase in stomach acid which irritates the esophagus, intestines, and stomach," says Calapai.

Along with nausea, vomiting can occur as well. Vomiting is also a sign of drinking too much, but if you feel that you immediately throw up from very few drinks, it's likely a sign of an intolerance.

"This is common even for those who are not alcohol intolerant, but for those who are, it's more severe and comes on quicker," says Calapai. "When alcohol is consumed it affects how water is absorbed in the large intestine leading to more fluid and quicker stool passage."

"An alcohol intolerance can cause tachycardia, or a fast heart beat," says Surasky. A fast heart rate can also be a sign of a greater alcohol allergy, according to Livestrong, so if you experiencing a racing heart after drinking, it's best to go see a doctor.

An alcohol intolerance can cause worsening of respiratory issues, says Surasky. "If you have asthma, you can have asthmatic reaction at that moment," he says.

It's not something you might be able to tell on your own, but an alcohol intolerance can cause a drop in blood pressure after drinking, according to Mayo Clinic. Some indicators that your blood pressure has dropped include dizziness, lack of concentration, fatigue, rapid shallow breathing, and more.

When in doubt, it's best to cut back on the alcohol, but also be sure to see a doctor, who can help you come up with the correct diagnosis.

More like this
How Ovulation Affects Your Sense Of Smell, Libido, & More
By JR Thorpe and Lexi Inks
11 Surprising Ways Thongs Can Affect Your Health
By Carolyn Steber
An Expert Weighs In On The Viral Raw Carrot Salad Trend
By Alexis Morillo
The Case For Following A Menstrual Cycle Workout Plan
By Emma McGowan and Carolyn Steber
Get Even More From Bustle — Sign Up For The Newsletter
From hair trends to relationship advice, our daily newsletter has everything you need to sound like a person who’s on TikTok, even if you aren’t.