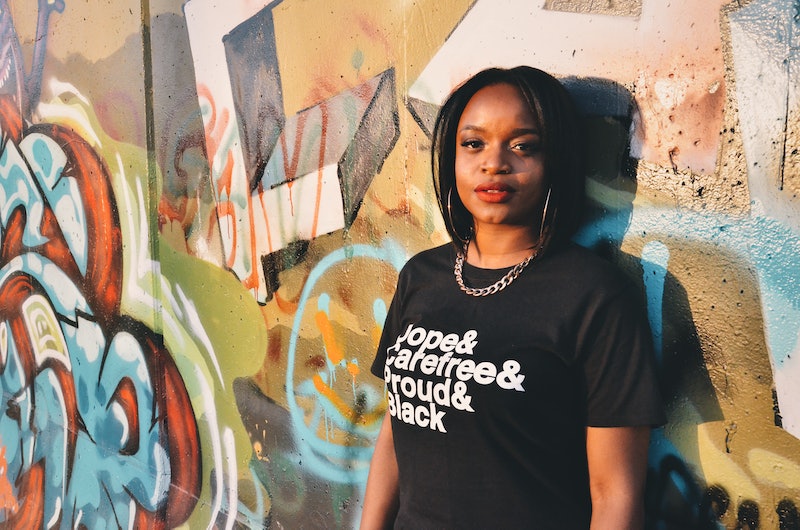 When you rarely see yourself reflected in the candidates running for president and you struggle to believe that elected officials genuinely care about the issues affecting your community, voting can seem like a waste of time. For some African-Americans, their preferred way of making a political statement is by not voting at all. But Brittany Packnett, co-founder of Campaign Zero, tells Bustle that if African-Americans really want policymakers to pay attention to them, then it's imperative that minorities turn out on Election Day.

For Packnett, minorities' right to vote is still threatened today — just look at the white nationalists trying to suppress minority voters. "This idea that people fought for our vote is an important one, but I know that doesn't always resonate with people because it can feel distant," Packnett says. "We're still fighting for our vote now, and if it didn't mean anything we wouldn't have to fight for it. ... If it didn't mean anything, people wouldn't be threatening to stand outside of polling places in urban areas and intimidate voters to stop them from going inside."

And while that might encourage some to disengage with the political process, she argues voting not only empowers black communities, but it requires politicians to pay attention to them.

"People are still trying to take away our right to vote right now, because it means something."

Campaign Zero is an organization that has created a 10-part policy plan to end police violence — things like rethinking police training, limiting use of force, and ending broken windows policing. Packnett served on Obama's White House Task Force for 21st Century Policing and used this political opportunity to push Campaign Zero's agenda on really helping communities of color. "I didn't want this to be time poorly spent, knowing that there was a fight going on at home, knowing that we were fighting for our lives at home," Packnett tells me of her time spent in Task Force meetings.

But the time was certainly not wasted. By engaging with the system, Packnett took her communities' concerns directly to the White House. "The call for independent prosecutors and investigators was something that came directly from the street and that I felt very responsible to demand at that table," Packnett tells me. "It was not something that everybody wanted to put in the task force recommendations at first." She continued to push for this to be included in the report, and it actually resulted in the Justice Department calling for new investigators in the case of Eric Garner in New York.

Although this work undoubtedly created change, Packnett tells me she understands why so many African-Americans feel disenfranchised with our political process. "I truly do understand why it can feel like there's no point in me doing anything because when I did exercise my democracy, you met me with tear gas. When I did decide to go outside and tweet the hashtag and hold up my cardboard sign, you pepper sprayed me."

Yet through these feelings of distrust in the system, Packnett says she has come to realize how voting creates power for black communities. "If we're going to create change, we have to use every single tool at our disposal. It's not wise to leave an opportunity on the table to create change when I can pick it up and use it for the mission that I deem important," Packnett says. "So, if I'm not willing to let someone disenfranchise me, I'm certainly not willing to disenfranchise myself."

Voting is one of the most tangible and powerful ways African-Americans can demand that politicians address issues affecting marginalized communities, according to Packnett. The black unemployment rate has been nearly twice that of whites' since 1963, people of color are disproportionately murdered by the police, and minorities often have a harder time accessing proper health care.

"We have to really understand that every single vote equals money that people will commit to our issues in the future or not," Packnett tells me. By not showing up to the polls on Election Day, Packnett says this tells politicians "that they don't need to care about what we think from now on."

In 2008 and 2012, black voters carried Obama with 65 percent and 66 percent turnout rates, respectively. Donald Trump has polled as low as zero percent support among African-American voters, and they could very likely carry Hillary Clinton to the White House in the same way they did for Obama. Casting a vote for a flawed system doesn't mean you support that system; it means you're speaking up about the changes you want to see from your policymakers in the future.

"I genuinely believe we can accomplish everything."

"The process of change can often feel frustratingly incremental and yet, in both our moments of taking huge, urgent leaps and our moments of taking quiet, intentional steps, all of them are necessary," Packnett says. So regardless who serves as president, Packnett says that a positive outcome for black communities would be if "people directly address issues of poverty, mass incarceration, criminal justice, police violence, education, immigration, [and] the rights of trans people of color." All of this, she believes, will happen if African-Americans go to the polls.

"I always have hope because the people are powerful," Packnett says. "I think that's where my hope comes from, and I genuinely believe we can accomplish everything."