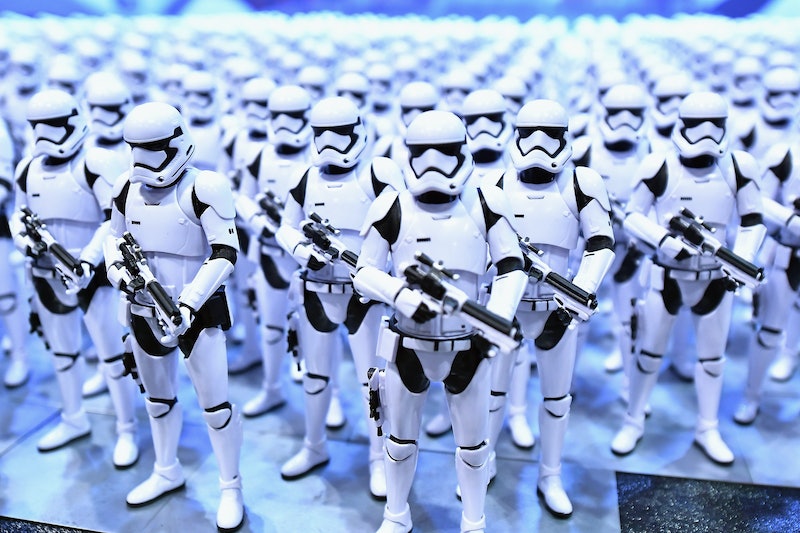 That is, I dabble in the intergalactic universe of Wookiees, paranoid androids (no, not this one), Jedi Knights, and painfully cheesy romantic dialogue, but I can’t pretend that I’ve devoted my life to the Force. I regard each Star Wars film as mandatory viewing, but, as a ‘90s girl, I can’t bring myself to venerate the original trilogy (which debuted in 1977) over the more recently produced prequels. (After all, the originals don’t have Ewan McGregor, do they? Thought so.) However, I enjoyed Star Wars III: Revenge of the Sith enough to eagerly devour the book version of the movie when it was released. And while other young girls my age were dressing up like Princess Ariel or Princess Jasmine, I was busy coiffing my hair in signature Princess Leia buns and donning regal Queen Amidala headpieces.

…Okay. Maybe I was just a bit infatuated. (Thanks, Dad.)

Star Wars also managed to infiltrate my bookshelf. I ate up nearly every book in Jude Watson’s YA Jedi Apprentice series, which follow the adventures of young Obi-Wan Kenobi and his master, Qui-Gon Jinn, before the events of Star Wars Episode I: The Phantom Menace. At the time, I had no idea of the artistic and legal implications of enjoying George Lucas’ iconic characters in print rather than on screen, in their original medium. But the recent release of Star Wars: Crucible by fantasy/scifi author Troy Denning — along with my father’s growing pile of non-Star Wars “to read” books when (and only when) his Star Wars addiction is sufficiently satiated — spurred my interest in the wide world of spinoff literature.

The story from the legal front is pretty simple and definitive: Lucasfilm controls everything. (Now under the umbrella of Disney, of course.) Founded by George Lucas in 1971, Lucasfilm Ltd. is a production company that encompasses several subdivisions, including LucasBooks, the publishing arm of Lucasfilm. LucasBooks partners with a bunch of different mainstream publishing companies, most notably Del Rey, the science fiction imprint of Random House.

The books were initially released to entertain fans after the conclusion of the original trilogy, but the Star Wars literature industry has now blossomed into something much larger, something of — dare I say it — galactic proportions. The “Expanded Universe” has come a long way since Judy-Lynn del Rey took a chance on a little-known science fiction movie called Star Wars, and published the very first Star Wars tie-in novel in 1976 to unprecedented success. Since then, over 1,000 Star Wars books have been published, including 125 million copies and 115 best-sellers. These days, LucasBooks puts out a staggering 60 to 70 titles each year. In an interview with NPR, Wall Street Journal reporter Alexandra Alter notes that “It's actually gotten to the point where there are really hardcore Star Wars fans that prefer the books to the movies.” (Score one for Team Reading Rainbow!)

The process of composing a Star Wars book is itself a fascinating study in interdisciplinary relations. Alter sheds light on the process: Lucasfilm editors compile a list of acceptable plot points, which they send to authors interested in contributing Star Wars fiction. Authors can then submit book drafts based on these approved outlines, and the editors will painstakingly comb through the drafts to make sure nothing deviates too far from Lucasfilm’s vision. There’s even a special “continuity editor,” Leland Chee, whose job is to keep tabs on literally every aspect of the Star Wars universe and make sure that all plot points connect and all characters are consistent. (Just considering the immense amount of complex flowcharts that are involved in this endeavor makes my head spin!) In the end, Lucasfilm has the final say on every little detail that goes to press.

Which is why Disney’s April announcement that it will release a new, future-based Star Wars trilogy unleashed a Tatooine-strength sandstorm of controversy among the Star Wars literati. Some of the Star Wars books take place in between or before the movies, but one of the most popular verticals includes the stories of Luke, Leia, Han Solo, and their many descendants in the era after the latest (chronologically speaking) Star Wars film. Will Disney remain faithful to the narrative that has played out over the course of the dozens of novels published in the post-Return of the Jedi era? More importantly: Should it have to?

I pose this question as an artistic query rather than a legal one. The whole idea of an “Expanded Universe” is an intriguing concept for fans of any literary or movie franchise. Though the aforementioned hardcore Star Wars fans who prefer the books to the movies are probably in the minority, even those who swear by the film franchise enjoy learning more about the personalities and backstories of the beloved characters first introduced on screen over thirty years ago. These stories can also serve to inject fresh life into the movies upon re-watching, allowing fans to view the films with new perspectives. On the financial level, the benefits are obvious: More marketing and more merchandising equals more money for George Lucas & co. Sounds great for all parties involved.

Discussing the vast Star Wars universe with my father the other day, we both expressed our desire to see more of some beloved characters from another wildly popular franchise: Harry Potter. But J. K. Rowling has been notoriously tight-lipped about expanding her cherished Potterverse, and even more authoritarian with regards to letting others pen books on Harry and his wizarding world friends. In 2007, she sued Harry Potter Lexicon owner Steve Vander Ark when the latter attempted to publish a 400-page Harry Potter Encyclopedia, since she had announced plans to write one of her own. A modified, “unofficial” version of Vander Ark’s encyclopedia was published the following year.

J. K. Rowling is of the (completely legitimate) opinion that the characters an author creates belong, in a sense, to the author. In that sense, fan fiction is acceptable because the characters are merely borrowed from the original author as a way to pay homage to a series, and fanfic stories are commonly accepted as “not real.” Compared to the fictional stories of the original author which are… OK, getting a tad meta here.

They say imitation is the sincerest form of flattery, but we all know that’s a load of apologist crap. Your work is your work, and you want it to be recognized as your own. It’s also been said that writing a novel is, metaphorically speaking, a lot like giving birth. To continue with that metaphor, letting others get ahold of the characters you created — gave birth to, so to speak — would be a lot like letting someone else raise your kids. And even Lucas, through Lucasfilm, maintains a tight control over anything that is produced under the Star Wars label. Perhaps the only reason he doesn’t write the novels himself is because he’s a film producer, not an author, but this is his way of making sure that he’s at least minimally involved in the process.

Other authors feel differently, with Stephen King being among the most notable. King is famous for his rather trippy theory that all works of literature are somehow, someway, interconnected. He frequently draws characters from one of his novels into another one of his novels, and sometimes makes overt references to characters or aspects of other literary endeavors. In King’s The Dark Tower series, he describes something called “sneetches” (sound familiar?), which are actually marked as “Harry Potter models.” Literature personalities belong to everyone, because for King, writing is partly a passive process; he “hears voices,” and that’s where he gets the ideas for his novels.

Star Wars fans are fortunate to have a seemingly endless supply of material to feed their Jedi Knight cravings. But while I’d happily sell any organ to get my hands on an “official” (that is, one with Rowling’s stamp of approval) pre-Harry Potter era Marauders story, I can’t begrudge JKR for clinging tightly to her imaginative, irreplaceable children.