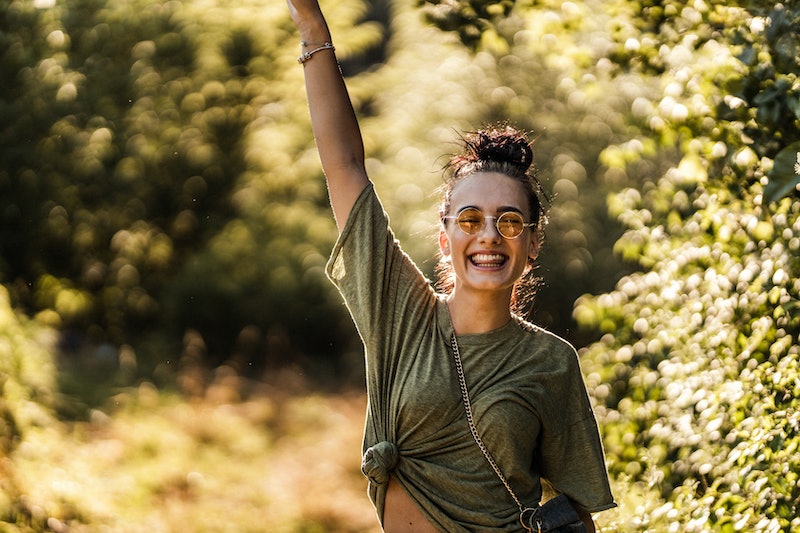 Now that Halloween is over, the long, early nights of autumn have abruptly switched from appropriately spooky to kind of depressing, and the days are only going to get shorter from here on out. But does sunshine really make you happy? You don't have to be the type of person to bask like a lizard in the sun shining through your windows (although it's definitely one of my favorite hobbies) to notice that sunlight tends to be an automatic mood-lifter. You've probably even heard of Seasonal Affective Disorder (SAD), a common type of seasonal depression that often occurs during the dark winter months — but according to recent research, sunshine influences virtually everyone's mood, whether you're prone to SAD or not.

According to Science Daily, in a study published in the Journal of Affective Disorders, researchers at Brigham Young University investigated at the intersection of weather, pollution, and mood. Using meteorological data from the university's Physics and Astronomy Weather Station and pollution data from the U.S. Environmental Protection Agency, the study's authors compared weather with the mental health of patients at Brigham Young's Counseling and Psychological Services Center. You might expect people to be gloomier on cloudy days or times when pollution was high, but after looking at numerous aspects of the weather, researchers found that this didn't quite pan out — except when they looked at sunshine.

As much as sunlight may make you want to hiss and dive back into bed when you first wake up, it's actually associated with making people feel better in the long run. Or rather, a lack of sunshine is associated with feeling down. Researchers found that people reported more mental distress when the days were shorter. Interestingly, the amount of sunshine didn't necessarily affect mood; solar irradiance, or the amount of sunlight actually hitting the ground, wasn't significant. Instead, it's the length of daylight that appears to be the strongest influence.

"The one thing that was really significant was the amount of time between sunrise and sunset," said one of the study's authors, Mark Beecher, according to Science Daily. In the paper itself, researchers concluded that "seasonal increases in sun time were associated with decreased mental health distress."

Previous research has found far weaker connections between weather and mood, if they've found any. In 2008, for example, a study found that sunshine was largely associated with energy levels, and the "average effect of weather on mood was only small." However, multiple studies have indicated that spending time outdoors is likely to boost your mood, not to mention its effect on your physical health. Then there's the aforementioned SAD. Each year, an estimated 10 million Americans find themselves depressed curing the winter months, with suggested treatments including light therapy.

Spending more time outside isn't going to drastically change your life, but it can't hurt to relax in the sun for a few minutes next time you're feeling down. Just be sure to wear sunscreen — nothing is more depressing that spending a vacation stuck inside, peeling your skin off in sheets.

More like this
13 Summer Solstice Quotes To Celebrate The Longest Day Of The Year
By Sadie Trombetta
6 Abortion Advocates To Follow On TikTok
By Sara Youngblood Gregory
The Summer Solstice Spiritual Meaning, Explained
By Jessica Booth and Brittany Beringer
How To Protect Your Digital Privacy If You Need An Abortion Post-Roe
By Kaitlyn Wylde
Get Even More From Bustle — Sign Up For The Newsletter