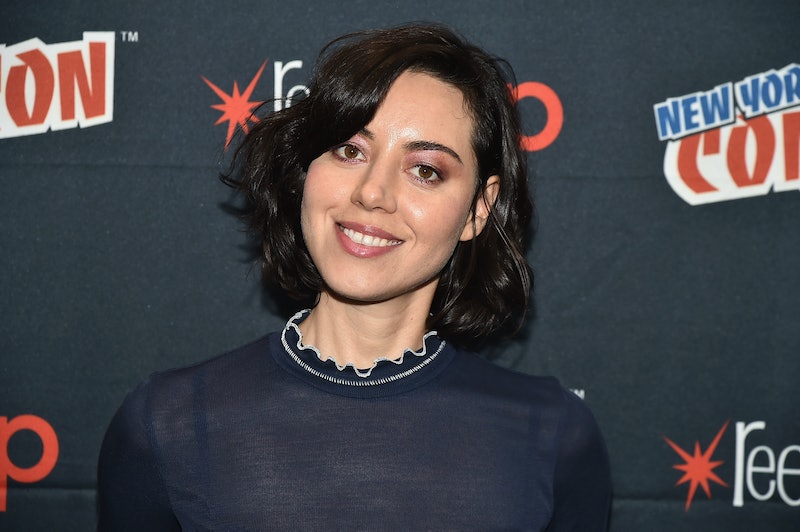 As the saying goes, sometimes life imitates art and that's certainly the case here. Aubrey Plaza and Michael Cera almost got married in Las Vegas, the former Parks and Recreation star revealed on RuPaul's podcast with Michelle Visage, What's The Tee? After connecting on the set of Scott Pilgrim vs. the World in 2010 and falling for each other during a cross-country road trip, they dated around "a year and half." They then "almost got married in Vegas," she also dished. I didn't even know they ever dated, so to learn that they could now be husband and wife is especially surprising.

Per the 32-year-old actor, despite them not getting married and later breaking up, they are still very close. "He’s a very special — I mean, we love each other. We’re still really good friends. He’s just a weird little freak and we speak the same language. He’s one of the funniest people I know."

Doesn't all of this sound like something her Parks and Rec character, April Ludgate, would've totally done? April was always spontaneous and up for something crazy, so getting married in Vegas would be right up her alley. If you recall, April's wedding to Andy Dwyer was spur of the moment and without planning, which is how most Vegas weddings go down. In Season 3, Episode 9 titled "Andy and April's Fancy Party," Andy and April invited a bunch of people over for what they called a "dinner party." However, after everyone showed up, they announced it was actually a surprise wedding and they tied the knot, despite Leslie Knope being against it at first.

As disastrous as it looked and sounded, April and Andy's wedding definitely wasn't a mistake. They lasted the entire series and stood by each other through both the good times, the bad times, and the insane times. Their unsuspected and quick wedding was the right choice in the end.

That easily could've been the case for Plaza and Cera, but now we'll never know. Though, that doesn't mean Plaza won't end up pulling an April in the future, so stay tuned.

More like this
Here’s What Happens To Bill & Frank In 'The Last Of Us' Video Game
By Brad Witter
Pamela Anderson's Sons Brandon & Dylan Have Their Own Hollywood Careers
By Arya Roshanian
Ashton Kutcher Wants Danny Masterson “To Be Found Innocent” In Rape Retrial
By Jake Viswanath
Linda Ronstadt’s “Long Long Time” Plays A Pivotal Role In The Last Of Us
By Brad Witter
Get Even More From Bustle — Sign Up For The Newsletter
From hair trends to relationship advice, our daily newsletter has everything you need to sound like a person who’s on TikTok, even if you aren’t.