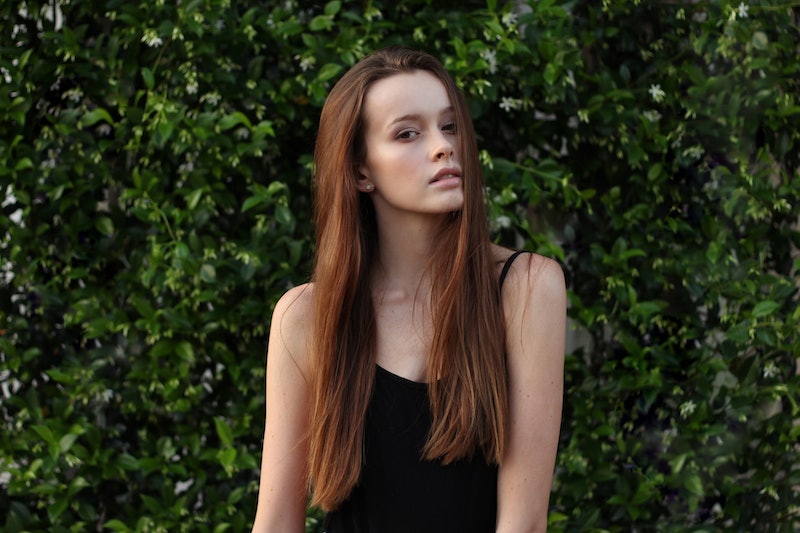 Nothing is worse than letting someone into your life, only to find out that they've betrayed your trust and let you down. It's not good to walk around skeptical of everyone, which is why it's important to be able to pick up on subtle signs that someone isn't trustworthy. Sometimes, picking up on these red flags can make all the difference in protecting ourself from getting hurt without being cynical about every person we come across.

Although we shouldn't walk around suspicious of everyone we meet, it's essential to have a basic understanding of the types of people who tend to be generally untrustworthy. "If you don't know who is trustworthy, and who isn't, you're going to make mistakes about the big stuff as well as the small stuff — anything from which car to buy, which entree to order, to whom you should enter into a dating relationship or home purchase with," says Gretchen Kubacky, Psy.D. over email. "Lacking that understanding leads to uncertainty, doubt, and indecision."

It's always a good idea to trust your gut, but people's actions and behaviors can also reveal how much they can be trusted. If you're wondering what are some major red flags when it comes to a person's authenticity and honesty, pay attention to these 10 interesting, subtle clues that someone is not trustworthy.

1. You Have An Instinct

First and foremost, if you have a weird feeling about someone, even if it's unexplained, it's probably there for a good reason. "Unless you have a history of being overly suspicious, if your gut tells you someone is not to be trusted, there is a good chance that is right," says Sarah Schewitz, Psy.D. over email. "Sometimes your unconscious mind and intuition can pick up on cues that your conscious mind might not notice or might filter out as seemingly unnecessary information."

"If you're noticing glaringly inconsistent behaviors, inconsistencies between stories, or secretive behaviors without explanation, this may signal a red flag for you to not trust someone," says clinical psychologist Marni Amsellem, Ph.D. over email. You should be especially suspicious if they avoid the question when asked about these inconsistencies or come up with some elaborate story.

3. Your Friends Say Something

Sometimes we see what we want to see, and we can overlook things that are obvious to others. "If trusted friends or family share with you their skepticism about this person's trustworthiness, it is time to be honest with yourself," says Amsellem. "Is there something that you should be seeing that you are not wanting to see?"

4. You See Them Lie To Others

Hearing someone lie to others is never a good sign, and although it's easy to believe you are the exception, that is rarely the case. "If they will lie to other people, what is stopping them from lying to you?" says Schewitz.

If someone is flakey, that's not a good sign. Trust is not just about telling the truth; it’s also about showing up and doing what you promise to do," says Schewitz. "If someone is consistently bailing on plans at the last minute, forgetting to do things they said they would do, or dropping the ball at work or at home, that is a good indicator that you can’t trust them to do what they say they will. In other words, you can’t count on them."

6. They're Never Willing To Compromise

Not only is it frustrating, but it's suspicious when someone is never able to meet you in the middle and only wants to do things on their terms. According to John Gottman, author of The Science Of Trust , trust is built slowly over time as people begin to compromise.

Someone who boasts a lot is likely exaggerating the truth, trying to cover up some inadequacy, or is trying to prove something, says Schewitz. "Although having the need to prove something doesn’t automatically make someone untrustworthy, it should raise some red flags and make you ask yourself, why do they have such a hard time being vulnerable and authentic?" she says. "What are they trying to hide?"

9. You Don't Know Much About Their Past

"In this electronic day and age, almost everyone has a digital footprint," says Kubacky. "If a person is vague about where they're from, their relationship history, their education, or their career, be wary. Trustworthy people don't necessarily plaster their life details across the internet, but you should be able to verify some facts about them with relative ease."

If someone gossips frequently about others, they probably don't keep much to themselves. Again, if they will do it to another friend/family member/co-worker, what makes you think they won’t do it to you?" says Schewitz. "People’s ethics and morals don’t change much from scenario to scenario."

It can be hard to tell if someone is worth your trust, but if it doesn't feel right, they probably aren't.