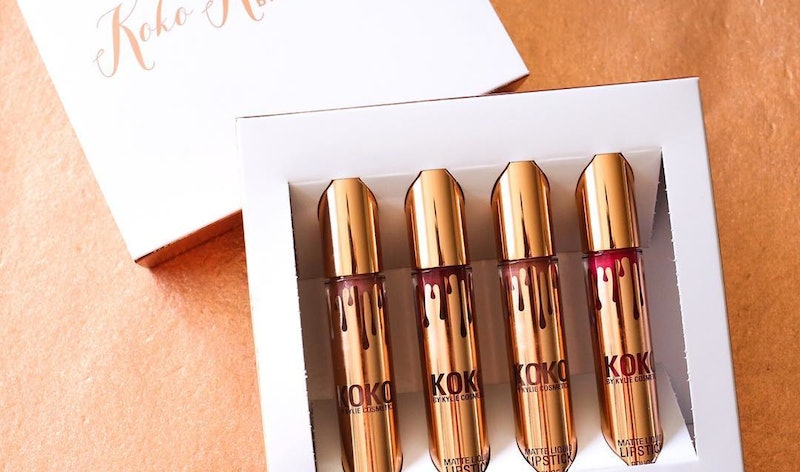 Makeup lovers around the world are freaking out right now. Why, you ask? Kylie Cosmetics has just announced its first collaboration with Khloe Kardashian and it's called Koko Kollection by Kylie Cosmetics. The brand's first collaboration consists of four lip shades that have fans going insane with anticipation for its market launch. In four beautiful shades of pink, this Kollection has three matte lip colors, a nude, a bright, and a dark, and a shimmery pink gloss. Flirty and cute, right?

So with everyone prepping their bank accounts, how much will these beauties sell for? Kylie Cosmetics has announced that the Koko Kollection will be on sale for $40. Normally, any one of the Kylie Cosmetics matte colors would cost $17, and the glosses $15. If you were to get a regular set of three matte colors and a gloss from the brand, you'd usually be paying $66. So with the Koko Kollection, you're paying $10 a bottle. That sounds like a deal, to me!

This sister act will hit the stores and online on Nov. 9, kicking off the holiday shopping season. Since Jenner just announced this epic collab this afternoon, fans won't even have to wait an entire week to get their hands on these lovely lippies.

When you can get four of the Kylie Cosmetics lip colors for $40, you say yes.

These come in perfect timing for when you're shopping for your friends, who will you be giving the Koko Kollection to?

Now that you've seen the swatches, which color is your favorite?

You can purchase Koko Kollection by Kylie Cosmetics on Wednesday, Nov. 9 at 3 p.m. PT.