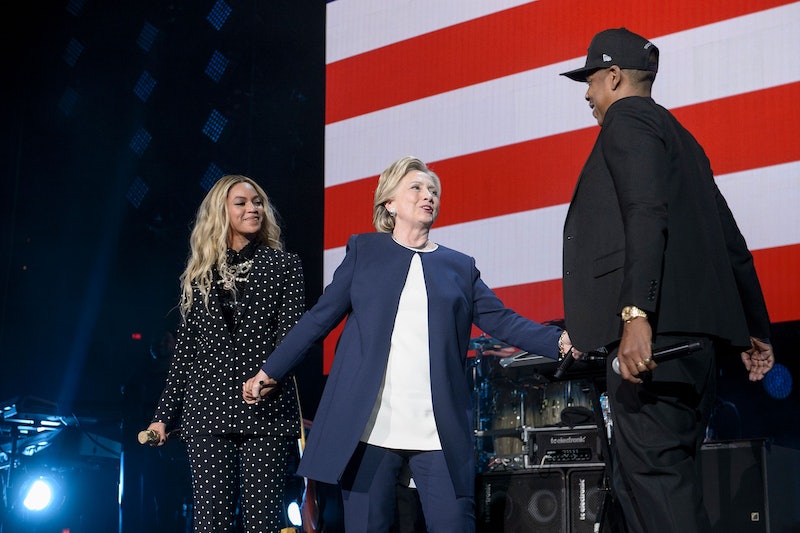 On Friday night, you could find the invincible trifecta that is Beyoncé, Jay Z, and Hillary Rodham Clinton hanging out in Cleveland, Ohio, at a rally intended to raise momentum for Clinton going into Election Day. "Less than 100 years ago, women did not have the right to vote. Look how far we've come," Beyoncé said in a speech about Clinton prior to her performance. She went on to perform in a custom-made pantsuit in a clear homage to Clinton.

"I want my daughter to grow up seeing a woman lead our country, and know that her possibilities are limitless," Beyoncé told the crowd, referring to her child with Jay Z, Blue Ivy. "We have to think about our daughters." She went on to state clearly, "I'm with her."

As Beyoncé performed her hit "Run The World," a feminist girl-power anthem and a clear tribute to the Democratic presidential nominee, a quote card with Clinton's famous "baked cookies" quote appeared on the screen behind her. "I suppose I could have stayed home and baked cookies and had teas," Clinton notoriously said when asked about being a new kind of First Lady in Arkansas. "But what I decided to do was fulfill my profession." (Clinton was later forced to apologize for those comments, which were seen to attack stay-at-home mothers and housewives.)

Of Donald Trump, Jay Z told the crowd: "I don't have any ill will towards him, but his conversation is divisive." He went on to say: "He cannot be our president."

"Once you divide us, you weaken us," he said. "We're stronger together," he added, invoking Clinton's campaign slogan, Stronger Together.

Meanwhile, Trump seemed sulky at his own rally Friday night in Pennsylvania. "By the way," he huffed, "I didn't have to bring J. Lo or Jay Z." He continued: "Just me. No guitar, no piano, nothing."

Meanwhile, a photo of Beyoncé, Clinton, and Jay Z backstage prior to the concert was widely shared on Twitter.

The three teamed up in a move to pull in more young voters on the eve of Election Day. Both Jay Z and Beyoncé urged the crowd to make sure they voted on Tuesday, November 8.

Clinton has had more than her fair share of celebrity supporters this election cycle: Katy Perry, Lena Dunham, Meryl Streep, Elizabeth Banks, Sarah Silverman, and Amy Schumer, to name just a few. Trump, meanwhile, had a star of the TV show Duck Dynasty voach for him at the Republican National Convention.

More like this
Mollie King & Stuart Broad Just Shared The First Pic Of Their Baby
By Sophie McEvoy
Stormzy Was The Ultimate Fanboy When He Met Taylor Swift
By Sophie McEvoy
J. Lo Just Announced A New Album — And Ben Affleck Inspired At Least 1 Song
By Stephanie Topacio Long
Mariah Carey Is "So Proud" After Her Kids Joined Her In The Thanksgiving Day Parade
By Stephanie Topacio Long
Get Even More From Bustle — Sign Up For The Newsletter