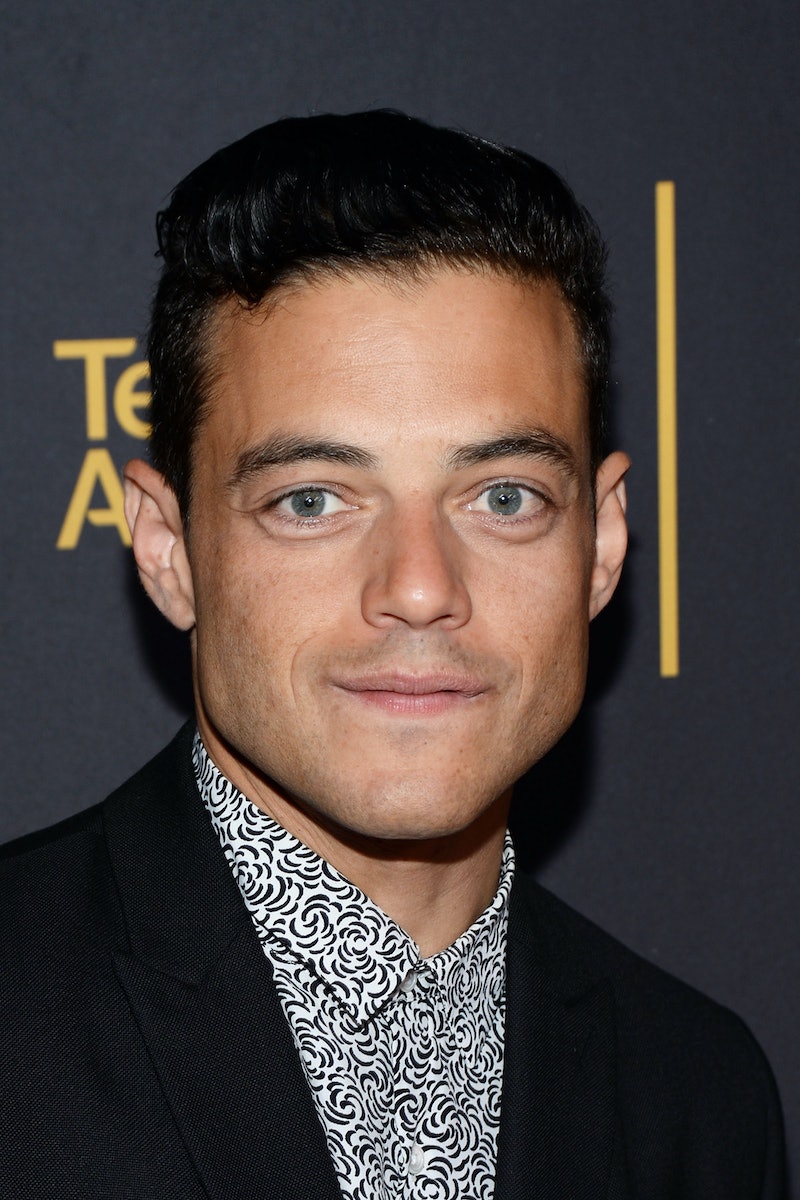 Hit pause on your conspiracy theories for a moment, Mr. Robot fans, because here's some news that even FSociety wouldn't be able to refute. On Friday, Deadline exclusively revealed that Rami Malek will be playing Freddie Mercury in the upcoming biopic about the legendary Queen frontman. The highly anticipated project, said to be called Bohemian Rhapsody after Queen's most iconic song, has faced various setbacks in getting made prior to this point. Originally, actors Ben Whishaw and Sasha Baron Cohen were both rumored to play the titular role, along with different writers and directors helming the movie. However, as a fan of both Malek and Mercury, I have to say that the Mr. Robot star is actually the perfect choice.

Just 45 years old when he died of complications from AIDS, Mercury was a British singer-songwriter renowned for his formidable voice, stage presence, and innovative songwriting style. As well as proudly possessing a wonderfully flamboyant presence on stage (and an array of spectacular outfits), he was celebrated for writing some of the greatest, genre-defying songs of the '80s.

As such, the role demands not only a skilled actor, but one who can perfectly exude the enigmatic charisma of the man, while demonstrating some serious musical skills. And you know what? I believe Malek is definitely capable of doing all of that — here's why.

As anyone who's managed to see even half an episode of Mr. Robot can attest, Malek means business with those acting skills (as established when he won the 2016 Emmy for Best Actor in a Drama Series). Mercury's story is not a simple one, nor was he a simple character. He remained something of an enigma, who was both extroverted, as well as deeply private and shy.

Malek's prowess for delivering an intense, quiet subtlety, alongside being forthright and animated, in his role as Elliot in Mr. Robot demonstrates that he's more than capable of juggling the duality of Mercury's persona with aplomb.

He Can Deliver Difficult Performances With Sensitivity

Speaking of which, Elliot is also not the most straightforward of characters to portray. As a character suffering from a progressed mental illness, Malek manages to portray the nuances of the character's condition with absolute sensitivity and respect. Though Mercury's battle with AIDS is obviously a different form of illness, it's still one which deserves to be portrayed correctly, and it absolutely requires the right sort of actor to do a performance like that justice.

As shown in his capable portrayal of a mentally ill character in Mr. Robot (with a tendency to hide things or provide some stealthy bluffing skills with which to keep the severity of his symptoms under wraps), Malek would be perfect in handling the complexity of Mercury's particular disease. Especially when considering the manner within which the press relentlessly hounded Mercury in his final years over his illness (and the way in which he respectfully denied their accusations in order to protect his loved ones), I think the actor could handle all the various complications of the performer's illness with balance and respect.

I honestly never even considered that Malek may have some sort of musical talent until now, but it all makes sense, you guys. As you can briefly witness in the above clip from The War At Home, it totally sounds as though Malek has something of a great voice hiding there. But also, check out those damn moves. That's a man who clearly lives for the stage and is ready to embrace and celebrate it with all the same vigorous and charming passion as Mercury used to.

He Clearly Has A Great Understanding Of The Power Of Music

Quite frankly, if you're going to play an iconic musical figure like Mercury in a movie, then you absolutely need to share that person's passion for music. So it comes with some relief to remember that music appears to be of great significance to the actor. In May 2016 while talking to the Los Angeles Times, Malek shared the songs he listens to in order to get into the correct head space for Elliott in Mr. Robot, and it's clear from his choices that he knows a thing or two about music (and also, he absolutely loves it).

In addition to including the songs "Werewolf" and "Metal Heart" by indie singer-songwriter Cat Power, Malek included tunes like "Downtown" by Majical Cloudz and Johnny Flynn's "The Wrote & The Writ." It's easy to imagine Malek completely and accurately connecting to Mercury through his spectacular back catalogue of and passion for music.

He Would Totally Look The Part In Mecury's Iconic Mustache

Seriously, a mustache can either make or break a man, but in this particular scenario, Malek would completely be made into Mercury with just the simple addition of the musician's iconic facial hair. You can see it too, right?

Honestly, I think he's going to be absolutely amazing in the role. Fans are likely going to have quite a bit of a wait until the first look at Malek as Mercury, but something tells me he's going to give a performance that the iconic singer rightly deserves.