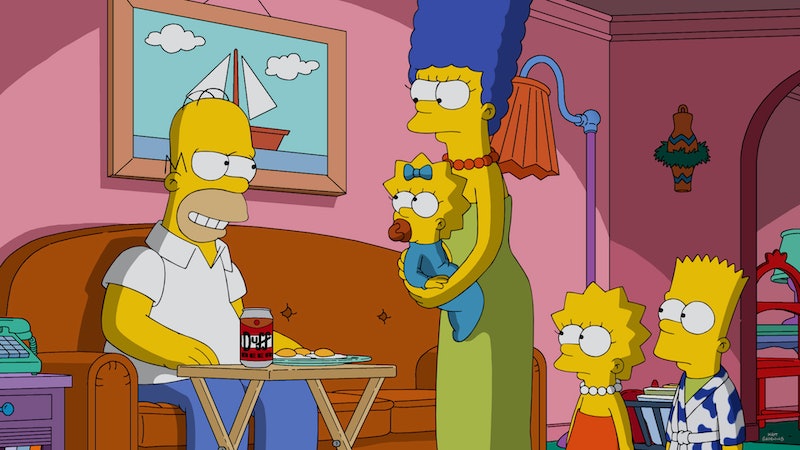 Can you believe that the The Simpsons is the longest-running scripted television show? The beloved animated series just broke this major record when it was renewed for both its 29th and 30th seasons on Fox, according to The Hollywood Reporter. The Simpsons has been a staple of American TV since it first debuted in 1989, and has remained an iconic piece of both television and animated comedy ever since. No matter which way you slice it, this is a monumental achievement for any television show. By the time The Simpsons finishes its 30th season, it will have aired 669 episodes over — yes, you guessed it — 30 long years. This achievement is the definition of wild. In the entertainment industry, this kind of longevity in television programming is unheard of.

The Simpsons began as a series of animated shorts that served as interstitials between sketches on The Tracy Ullman Show in 1987. As you can imagine, The Simpsons took on a life and popularity of its own. The show's creator, Matt Groening, got the opportunity to move The Simpsons to Fox for a half-hour slot, and as they say, the rest is history. Over the last 28 years, the Simpsons have become a genuinely beloved pop culture family. They're loud-mouthed, obnoxious, weird, and downright lovable. Each member of the bunch is an icon in their own right. They have starred in their very own film, their images have been re-purposed into a plethora of merchandise, and they have even appeared in faux political ads.

It's no wonder that their staying power has resulted in their ability to influence and shape so much of modern culture. That influence is ostensibly a part of the reason that they got the green light for their 29th and 30th seasons. In addition to being cultural influencers, The Simpsons fearlessness — or consistency in political and social incorrectness, depending on how you look at it — in the subjects they tackle, and in the swaggering manner in which they do so, can also account for its consistent popularity. In the era of high show volumes from major television networks, The Simpsons could have been axed years ago to make room for new series. The fact that the show has consistently been renewed for nearly three decades is a sign that Fox won't let its crown jewel out of its sight any time soon.

No matter how you look at it, The Simpsons are here to stay. The means more of Bart's shenanigans, Lisa's saxophone playing, and Homer's churlishness crowding our television screens. Buckle up, kids. It's going to be a wild ride.