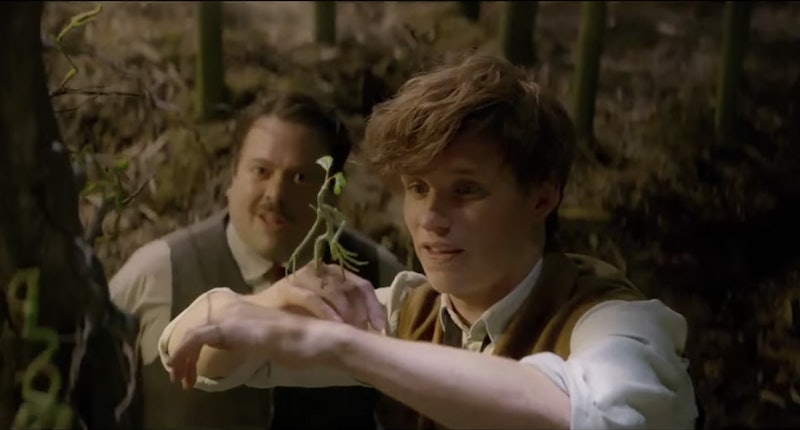 Move over Pygmy Puffs, there is a new contender for the cutest creature in the Harry Potter universe. The latest clip from Fantastic Beasts and Where to Find Them introduces the Bowtruckle, and it is basically the most adorable creature in all the land. It seems Newt has a special attachment to one Bowtruckle in particular, a little guy named Pickett.

Based on my observations, Bowtruckles are basically a cross of Baby Groot, Dobby, and a stick instinct, but the fictional character Pickett will remind you of the most is Ant-Man's pal Antony. Pickett screams non-human sidekick, and I suspect not getting attached to him will be impossible. In an interview with Pottermore, Eddie Redmayne confessed Pickett was actually his favorite magical creature. "Pickett is my favorite," the star revealed. "Pickett I adore because he’s clingy and he’s got attachment issues but I also love that he’s so spindly and stick-insecty. You almost can’t see his face but he reacts through his movement."

I am in love already. There is one catch though, as sweet as the charming Bowtruckles may seem, they're not an entirely peaceful creature. According to Pottermore, they are not easily provoked, but Newt himself wrote they will attack if a tree where they live is threatened. Those cute little guys are hiding some serious claws that have been known to be used for eye-gouging.

Like most creatures, the Bowtruckle is not going to go out of its way to harm someone. They only attack when they feel their habitat is being threatened. Bowtruckles tend to live in trees that are used for making wands, so their role in Fantastic Beasts and Where to Find Them could be crucial. Perhaps they are protecting a tree that should not fall into the hands of the wrong wizard? I will not be at all surprised if Pickett's claws come out at some point in the movie. Let's just hope he can avoid dying heroically like, well, Dobby, Groot, and Antony.

For now, just sit back and enjoy the special bond between Newt and Pickett. There is going to be an abundance of magical creatures in the film, but it looks like Newt has allowed himself to get closer to Pickett than the other creatures under his care. If the man who cataloged nearly every creature in the magical universe has such a soft spot for Pickett, there is no hope for anyone else. Go ahead and proclaim him as your fave now, resistance is futile.