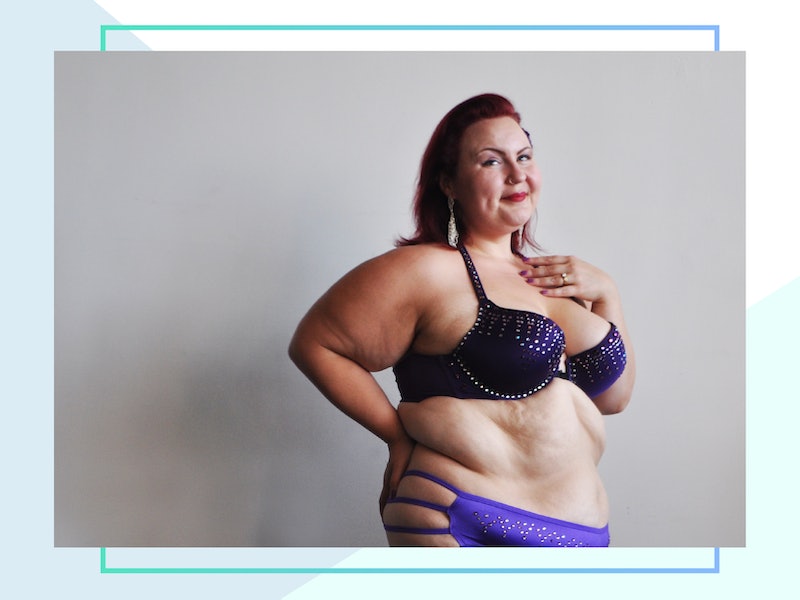 When watching burlesque performer Lillian Bustle in her element, it's difficult to imagine there having been a time when the plus size body positivity advocate was less than completely comfortable in her body. Whether gliding her fatness around the stage in a red sequin lingerie set as Donald Trump's derogatory words about women ring in the background or overtly encouraging audience members to reject self-hatred by writing on her round, low-rise panty-clad belly, Bustle seems more at peace with her almost-nude figure than many might be in a full-length nightie. But like most fat kids turned fat grownups, there were plenty of times when her body made her feel othered as a child.

"When I was an early teen, I felt like [my muffin top] made me stand out whenever I had to wear any uniform: Gym class, choir, girl scouts," she tells me in an interview. "It would make my shirts come untucked and I felt like it made me look sloppy." That feeling of "sloppiness" is likely one that a lot of fat kids can relate to, particularly young fat girls: Somewhere along the way, your body becomes unsightly, uncouth, unladylike. It's a feeling that seems further confirmed when the world around you doesn't seem built to accommodate the body you're living in.

Remembering the desks at school, Bustle says, "I had some classes where I barely fit in the desks and sometimes I could only fit if I let my muffin top rest on top of the desk." It was an experience she still calls "humiliating." And as someone acutely familiar with the sensation of my fat belly pressed far too intimately against plastic or hardwood surfaces, remembering the stares my body would elicit as I stepped in and out of a too-small work surface confirm her description.

"I knew that people knew that I was fat," Bustle adds. "But for some reason, that part of my body specifically made me feel like it was giving away my secret; like maybe people would just see me as 'curvy' if I had a nice hourglass waist."

Her muffin top, so different to the images of flat-bellied women and girls we're accustomed to seeing on TV or in magazines or on billboards, long felt like a barrier in the way of being accepted by both society in a macro sense and people in the day-to-day in a micro one. Of course, "Even slender people have belly rolls and muffin tops," Bustle muses. But because "we rarely see those rolls in the media [...] it can be hard to accept your shape if you don't see it reflected in the world around you."

As she grew older, Bustle would wear high-waisted girdles to smooth out her stomach under her clothes. Spanx were an essential component of the getting-dressed process. Despite the fact that, as she puts it, "sitting all day in a girdle is awful," shapewear became a tool Bustle utilized to try to achieve the "socially accepted shape of fatty" that might prevent her from looking "lumpy and gross" to passerby. Maybe it was OK that she was fat, as long as she could be the right kind of fat: The kind of fat with no trace of a visible belly outline.

It's difficult for Bustle to pinpoint a single turning point in her own cultivation of body love — including body love towards this part of her belly. But she knows that experimenting with fashion has been an invaluable tool. "The first time I wore a clingy dress with no girdle, I felt very freaked out and naked," she tells me. But "the second time, I kept catching glimpses of myself in windows and mirrors and instead of feeling embarrassed, I was thrilled; the next time, I felt dangerous and very punk rock."

The decision to eschew Spanx wasn't premeditated. It just sort of happened as more and more clothing options became available to her. As a teenager living in Virginia in the '90s, most plus fashion consisted of shapeless tunic tees and poorly-cut denim. Although she acknowledges that "the fashion industry still has a loooooong way to go as far as clothing for fat bodies goes," citing "digging through pages of clothing online, usually having to imagine what each style will look like on my body (which is most often a completely different shape from the model's), hunting for coupon codes and sales, paying for shipping, trying stuff on, trying to remember to take returns back to the post office in time" as just a few of the things setting apart the plus size shopping experience from the straight size one, she adds that, "Being able to dress (and undress!) in ways that celebrate my body on my terms has been immensely empowering."

Accessibility to progressive plus size fashion isn't always realistic for everyone, though. Thanks to fat taxes and the realities of running inclusive businesses as an indie designer, costs can get steep. For this reason, Bustle is thankful to swap and sell groups on Facebook and resale apps that "are making it more affordable to find deals and try new styles."

Some might deem this emphasis on fashion "materialistic," but Bustle's relationship with clothing has been transformative. By simply trying on the dresses or skirts that she once felt were not made for fat bodies and feeling damn good in them, she's reached a point where she can wear things that actually highlight her midsection and still feel confident, including burlesque costumes that she creates. She's reached a point where she can take off her clothing onstage or for a photographer, and revel in the rawness of being scantily-clad. "I want to celebrate my body and be as visible as possible," she tells me. "For other people to see me and think, 'Oh, if she can do it, I can do it.'"

Besides fashion, another useful tool on Bustle's discovery of self-acceptance has been a psychological one. At the heart of many of our body insecurities, she believes, lies our tendency to compare our bodies to those of others. "I used to compare myself to others constantly and for me it was very damaging," she confesses. To flip the script, she began to take note of the moments when she was having negative thoughts about other people's appearances in particular and "intentionally notice something positive and lovely about the person." In the end, this has helped prevent her "from being so judgmental of others and myself." The more beauty she allowed herself to find in all other kinds of bodies, the more beauty she allowed herself to see in her own.

Photography has also been crucial for her confidence. While she believes that being in control of one's image through selfies can be hugely empowering, "seeing yourself through someone else's lens (or sketchbook, or painting)" is something especially revolutionary to Bustle. "They're seeing you as art; they're looking at you, studying you, and then creating something beautiful out of your image to share with the world," she says. "The more you see photos of yourself, the less jarring it is when you see that one angle that might make you uncomfortable."

It's not to say that she adores every picture of herself, nor that she never looks at her muffin top without a shred of conflict. Every so often, she catches an image of her body that she hates. The difference is that she is "no longer devastated by them." "I now actually like to post photos where I think I look bizarre because that too feels empowering," she adds. "There's something satisfying about pointing to the things people might consider imperfections and saying, 'Hey, this is me! This was my body and face in this tiny slice of time that's captured forever in this picture. All of it is worth looking at."

Allowing these photos to exist publicly — photos in which her body is not remotely manipulated but rather entirely real — reminds her that there's quite a bit of excitement to be found in embracing the "taboo" or allegedly "flawed" aspects of our figures.

When asked how she was feeling about her muffin top several weeks after shooting with Substantia Jones, Bustle tells me, "I checked in with it by jiggling it a little bit, and I'm feeling neutral about my chub roll right now. I'm in comfy clothes just lounging around, and it's neither bringing me joy or discomfort. Right now it's just part of my body."

And here she touches upon something invaluable: You might not always adore every part of your body, but you don't necessarily have to. In the end, neutrality is infinitely preferable to self-hatred. And neutrality is something that can be achieved by simply spending time with your body: Seeing it from someone else's lens, trying on that garment you were once afraid of, or taking just a second to jiggle your muffin top.

More like this
Instagram & Facebook May Finally Lift Their Notorious Nudity Ban
By Allie Fasanella
Selena Gomez Dismissed Trolls' Comments About Her Body After The Golden Globes
By Stephanie Topacio Long
Phoebe Dynevor Serves ‘Bridgerton’ Underboob In Stunning Floral Gown
By El Hunt
J.Lo's Micro-French Manicure Has A Fun, Sparkly Twist
By Olivia Rose Rushing
Get Even More From Bustle — Sign Up For The Newsletter
From hair trends to relationship advice, our daily newsletter has everything you need to sound like a person who’s on TikTok, even if you aren’t.