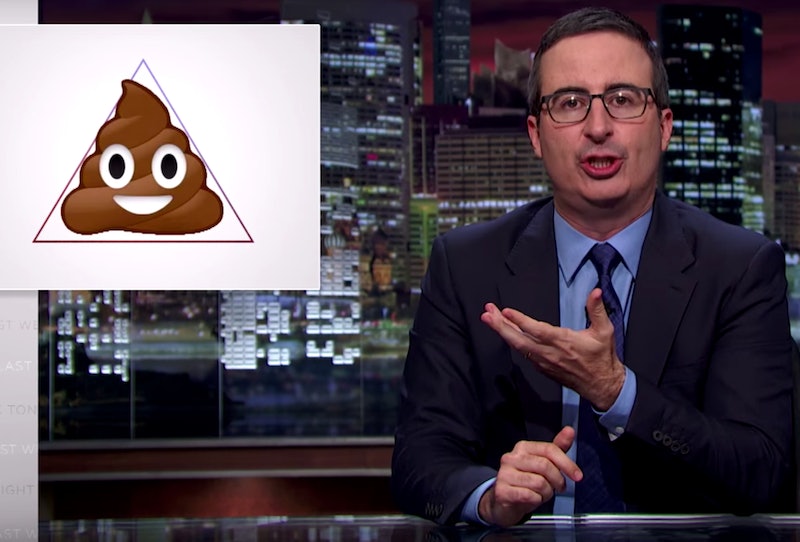 John Oliver stepped away from political talk on Sunday night — and, at first, it sounded really exciting. "For our main story tonight I would like to talk to you about an exciting opportunity. I just need 30 minutes of your time to explain it, but it has the possibility to transform your life. I'm talking about multi-level marketing companies or MLMs." What's that, you say? Oliver claimed that it's the likes of Mary Kay, Rodan + Fields, NuSkin, Amyway, and Herbalife. You don't buy their products in stores but rather from a friend, and Oliver said they're pyramid schemes that are awful.

Surely you know what he's talking about. It's a $36 billion industry that tends to get you hooked with promotional videos that ask you to share the message with 10 of your friends and loved ones. "Hold on, I'm supposed to share that with 10 people I love, adore, and admire," Oliver said. "That's a tough ask. Let's see, there the judges on this season of Project Runway, that's three, and then obviously Tim Gunn, that's four. If you count Tim Gunn twice, that's five. But that's still five short, and I am out now."

But even if the social part sounds terrible for Oliver, not everyone is so turned off by the idea:

You probably know someone who is considering joining an MLM, or who already has and posts about it 10 times a day on Facebook or Instagram. And if you do know someone like that, or have considered signing up yourself, this story is important.

Why so important? The way these businesses are organized. Distributors have two ways to make money: sell the product or recruit others into the company and get money based on their sales and the sales of the people they recruit. If it sounds like a pyramid scheme? It's because it is one, even if the companies themselves would prefer a different explanation.

Oh, I get it, it's not a pyramid scheme — it's just pyramid shaped. You know, like a Dorito, or an Angry Bird, or just a pile of bull shit.

In that moment the poop emoji shot onto the screen, which if you pay attention, shares the shape of, yes, a pyramid. Oliver took a look specifically at Herbalife, the world's third largest MLM with sales of more than $4 billion. They make nutritional supplements and get their distributors to find more friends to also be distributors. Celebrities from Cristiano Ronaldo to, yes, Madeleine Albright have endorsed it.

However, the company to pay a $200 million settlement to the Federal Trade Commission. The money will go to consumers who signed up as distributors and lost money. As the FTC chairwoman wrote at the time, "Herbalife is going to have to start operating legitimately, making only truthful claims about how much money its members are likely to make, and it will have to compensate consumers for the losses they have suffered as a result of what we charge are unfair and deceptive practices."

But Herbalife put it differently: "Hey, we’ve got great news. We’ve reached an agreement with the U.S. Federal Trade Commission that ensures that our mission to improve people’s lives will continue to thrive. This is really great news and it comes at a time when our business if growing bigger and better than ever before," the company's CEO Michael Johnson said in a video Oliver showed. So if even the punishment can be spun as a good thing, you might want to be a little bit suspect.

As Oliver put it, "He didn’t just polish that turd. He put it in a bottle and convinced people they can make a fortune selling nutritional turds in their spare time." So if a friend asks if you would like to be a licensed distributor for nutritional shakes, jewelry, or what have you, just think back to this segment.

But don't keep the news to yourself. Oliver would like to suggest his own pyramid scheme, #ThisIsAPyramidScheme. Share the "entire video" about MLMs, he says, "because if someone you know is thinking about joining an MLM this is a huge opportunity":

By sharing this you can be a leading distributor for a web video of the dangers of MLMs. You can do this full-time or part-time and give your family the lifestyle they deserve, which is frankly not getting caught up in this bullshit.

He makes a good argument — and, hey, no startup fees.