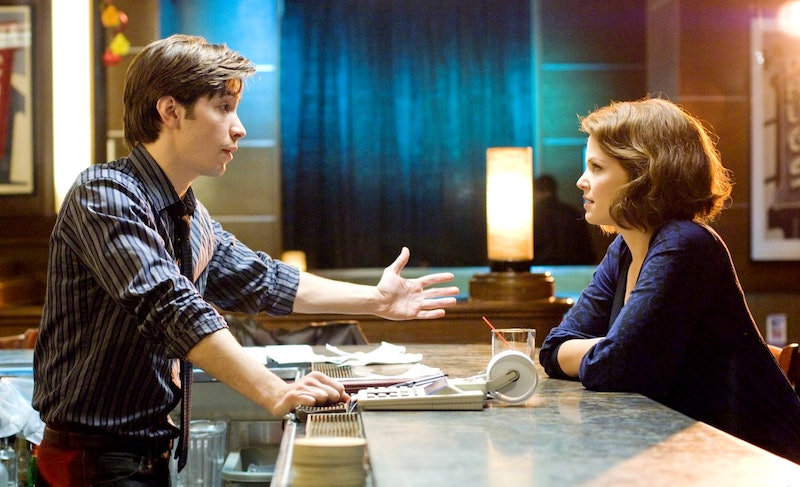 2004: George Bush was president, there was no Tea Party, I graduated from high school, Sex and the City ended, and a little book called He’s Just Not That Into You hit bookshelves. It was the best of times, it was the worst of times. In the 10 years since the publication of He’s Just Not That Into You, the heavens have opened and spewed out game-changers like the iPhone, Mad Men, Twitter, OKCupid, and a cervical cancer vaccine.

In honor of the 10th anniversary of the self-help powerhouse, let’s take a walk down memory lane and revisit the advice of the illustrious former Sex and the City writers, Greg Behrendt and Liz Tuccillo. Their more classic pieces of advice have aged gracefully, like a fine wine, while other tips have gone sour and virtually unusable with age. And, there were lots of parts that were just a bit gross to begin with.

I’ve re-read it so you don’t have to. See below for a selection of the good, the outdated, and the ugly dating tips that helped shape the romantic behaviors of a generation of (mostly straight, mostly middle-class) young women.

1. These guys exist because there are a lot of women out there who allow them to.

This one is really just good. The fact remains that, for one socially-constructed reason or another, there are a lot of guys walking among us who treat women like garbage. The bigger, more egregious versions of treating women like shit, like relationship violence, obviously cannot be accounted for by saying that women “allow” men to behave this way. But perhaps some guys would be less dickish, rude, immature, or unreliable, if more women had called them on their bad behavior.

One of the best things that exists on the Internet is an xojane article by Senam SistaTV Amagashie urging us to "Stop fucking dumb dudes." I spent the entirety of 2013 reminding myself of this: “First off, you can’t heal anybody's crazy and you definitely CANNOT heal any dude’s dumb.” It is not our responsibility to heal a dude’s dumb, so until he does it himself, we need to show him the door. My friend Rachel says, “The main lesson I took from the book was to not waste my time on people that don't care about me the way I want them to.” You can’t make someone else grow up, and He’s Just Not That into You is right that as long as we play savior to the guys we love (and who we want to love us), they will stay dumb. Just tell them it’s patriarchy’s fault, because it kind of is.

Yes. Yes. Yes. Sometimes instead of making lemonade you need to lick some salt, do a shot of tequila and bite straight into that lemon. Licking your wounds and moving on is just as dignified as “winning” the affection of someone.

3. Don’t be with someone who doesn’t do what they say they’re going to do.

The authors of He’s Just Not That into You argue that if a guy promises he will marry you/ ask you out/ introduce you to his friends/ get an STI test and then doesn’t, he’s not worth your time.

This is REAL. We spend a lot of time creating explanations for why the people we are dating don’t do what they say they are going to do. Maybe they have an anxiety disorder, or agoraphobia, or they were just really damaged by their last relationship?!?! My friend Shelly, a married mother of two, said of reading the book, “It was nice to be able to just let go and admit you can't control the feelings of other people.” You can’t make people — men, women or otherwise — do something that they don’t want to do. You need to be able to take your partner at their word.

4. You already have one asshole. You don’t need another.

Strong point. This one stands the test of time.

1. Do not go out with a guy that keeps you waiting by the phone.

Waiting by the phone in the traditional sense doesn’t really happen anymore. First of all, who calls anyone? Secondly, most of us constantly have our phones attached to our bodies, or we’re on Gchat or Facebook chat or Whatsapp all of the time. We absolutely still wait to hear from crushes, but waiting for a text while you're out with friends just doesn’t elicit the same pangs of humiliation as waiting by the landline in your bathrobe, working on your fourth coat of nail polish.

2014 Update: Don’t go out with anyone who disappears or falls out of contact for extended periods of time without an explanation. It’s rude.

2. He's just not that into you if he doesn't want to marry you

Over the past ten years, our parents have gotten divorced. Our friends have married and split up. We've been cheated on by spouses. The institution of marriage has changed a lot since 2004 — culturally, personally, and politically. It’s just not something as many of us are after anymore. Real talk: when I read this book in 2004, I'm sure I would have sworn I’d be married by now. Pinterest didn't exist, but you better believe I would have had my centerpieces and veil options pinned by the dozens if it did. It hasn’t happened because neither my partners nor I have wanted it to. Marrying someone is way bigger than just being “into” them. There are enormous socio-cultural implications that go beyond how keen you two are for each other.

3. I just think you might want to be realistic in how capable you are of changing the primordial impulses that drive all of human nature.

Greg writes this in response to Nikki, who calls bullshit on the idea that women must absolutely, no questions asked, wait for men to ask them out. Greg begs us to resign to the reality that men, regardless of pretty much everything (like sexual orientation?), have a biological need to pursue women. “We like not knowing if we can catch you. We feel rewarded when we do.” This is a prime example of how the book is so painfully heteronormative that it’s actually difficult for a progressive person to get through it in 2014. Talking about gender roles in terms of the “primordial impulses that drive all of human nature” is an antiquated approach to understanding potential dates. It’s OK for a book to be geared towards straight women. It’s not OK to assume that these “primordial impulses” are universal anymore.

4. A man who wants to make a relationship work will move mountains to keep the woman he loves.

It’s just that moving mountains is actually really hard, and the mountains just get bigger and heavier with the passage of time. Listen, I know that I’m doing exactly what the authors of the book accuse women of doing to make themselves crazy in love. I’m making excuses or inventing explanations for why a man may be too busy to move mountains to be with the woman he loves. I’ve done it in every relationship I’ve been in. I’ve seen enough of my own and my friends’ relationships go wrong to know that sometimes in love and dating, we have to surrender to the fact that it just can’t work, for whatever reason. Some people just fundamentally don’t want children, or don’t want to move to a new city, or can’t live with someone who drinks a bottle of cab sav every night.

My friend Marina said that she had previously thought that love could conquer all and that if it didn’t, one or both people weren’t trying hard enough, “not fully realizing that there might be some unhealthy thought processes behind that.” If you’re in a position where one of you has to move proverbial mountains, it means shit has gotten tricky. And you know what? Men don’t have a magical ability to solve problems. Expect him to fight for you, but don’t expect him to be the primary mountain-mover.

1. Remember, men are never too busy to get what they want.

Update for 2014: Don’t date any guy who would even dream of saying that. He's likely a bit of a dick.

Greg argues that a “wink and a smile will do it,” even when the man has every reason to worry about oh, I don’t know, being accused of sexual harassment? Or ruining a perfectly respectful work dynamic? Or, in the case of the gardener, losing a client and therefore INCOME?

Real life is not so black and white, and the entire book assumes that it is. Unfortunately, great relationships are often precariously perched in the grey. That’s why they are hard. We are complicated, flawed humans. If you are trying to date, marry, or sleep with someone who has interacted at all with other people in the course of their life, they are likely to have acquired some variety of relationship damage. We hurt and shape each other all the time. It’s really not fair or realistic to hold men responsible for initiating all hetero relationships, casual or serious, in the same way that it's not fair or realistic to assume that women will be 100 percent responsible for child rearing. Heartbreak and work pressure and overbearing parents all affect men, too. AND they aren’t socialized to talk about it over brunch like we are.

Although I hate to admit this, it is empowering to be reminded that it is a waste of our precious brain energy to sit around and wonder what the men in our lives are thinking. They are probably not stalking your ex’s instagram for clues into your previous relationship. They are most likely not drinking coffee in pajamas, processing your most recent argument with their besties. Perhaps most importantly, they are probably putting about a tenth of the thought you think they are into whether they should call you or sleep with you or date you. This one has been hugely helpful to me. When I find myself in a dude processing k-hole, I remind myself that there is essentially a zero percent chance that he's doing the same.

So there you go. I just saved you $9.00, but you’ll probably carry on as normal anyway whether you read the book or not. And you know what? You’re probably doing great.