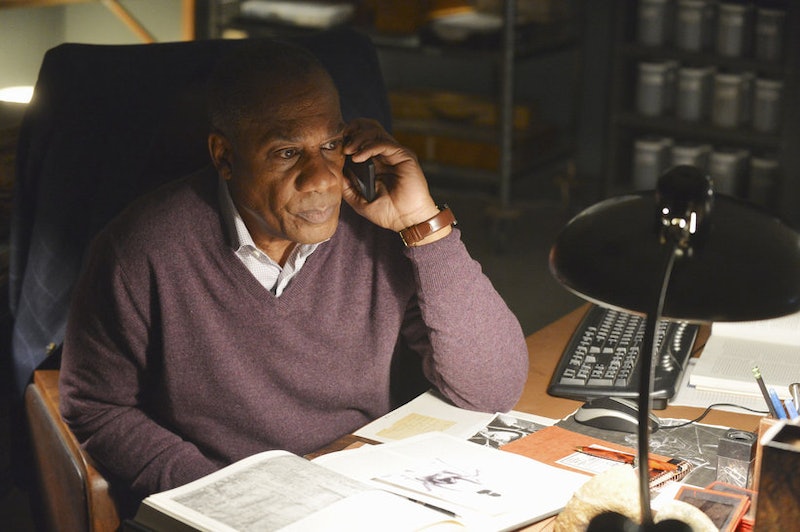 This week Scandal was all about family, which I'm sure would be sweet and all if this were a Norman Rockwell painting, but this is Scandal so instead, that means everything got batshit insane. Like, more than usual.

After hearing vague things about Fitz and Mellie's kids for two and a half seasons, this week we finally got to meet the illusive Jerry and Karen when they come to town to do a family interview. And it quickly becomes apparent that everything is more fun when there are actual teenagers in the White House instead of just the bad-decision-making, hormone-fueled, sort-of-adults we see normally. I vote that the First Children stay forever.

But of course, the White House family weren't the only ones being totally dysfunctional. Everyone got in on the fun.

Even Jake. Jake has managed to go from nice guy to ruthless and a little power mad in the course of about two months. This week saw him refusing to hand over the terrorist Mama Pope was trying to contact to legal law enforcement. And after delivering Fitz a nice monologue about how the President is just commander-in-chief and Jake is Command and dodging a few punches from a heartbroken Cyrus, he goes to threaten Eli. But Eli has a monologue of his own: Jake really came to see him because he wants to know he's not alone. Except, Eli tells him, he actually is. Sorry, Jake, no family for you.

Meanwhile, Quinn maybe (hopefully) has realized that B6-13 is not really the kind of family you want to belong to. This week, when not drilling into Mama Pope's terrorist connection, she's ducking Charlie's suspicious questions about Huck and telling Huck himself to go to hell before licking his face before making out with him before telling him to go to hell again. But at the end of the episode when Charlie moves into her apartment without telling her, it might have hit her that she is in over her head.

A part of me kind of wants Mama Pope to just burn the whole world to the ground if only because everything would be so much simpler that way. And she's well on her way to doing that. She finally meets with the terrorist Ivan, even though her middle man is being held by B6-13, and she gives him the information that Adnan stole off Olivia's computer while pretending to need help from Pope and Associates (information about the president, from campaign schedules to Secret Service procedures). So that can't be good. The woman is ruthless. She even tells her own daughter she's the help. So, yeah, all the families on this show are super functional, guys.

Is Olivia Family or the Help?

After spending the day dealing with Grant family drama of the dirtiest degree, Olivia is feeling very much under-appreciated and disrespected. Probably because these people don't appreciate her or respect her half as much as she deserves. Where once the administration seemed like one big unhappy, backstab-y family, now they seem like people who shout at Olivia to fix things. Which sucks. Can we go back to the days when Olivia ruled the world and everyone knew it?

God, Help Us: The First Family

Fitz's kids hate him for cheating on their mother. Jerry is a Democrat. Karen is angry. They plan on tanking the interview. Then they refuse to do the interview. Then Karen walks in on Mellie and Andrew in a state of semi-dress. Then Karen tells Fitz about it. Then Fitz punches Andrew in front of a whole bunch of people. Then Fitz and Mellie fight and Fitz is a jackass (with maybe a valid point or two, but it is overshadowed by him being a jackass). Then Fitz and Olivia fight. Then everybody sort of makes nice for the cameras. And throughout all of this Olivia is trying to control the situation, but Grant family drama clearly cannot be controlled. Sweetie you don't want to belong to this family, okay?

In what might be, oddly enough, the most touching family moment of the whole episode, Eli gives Olivia some help with her investigation into B6-13. He's definitely a shitty father sometimes, but then the bar is set pretty low in this show. And if Olivia is going to try to take down B6-13, it's nice knowing she'll have some backup.