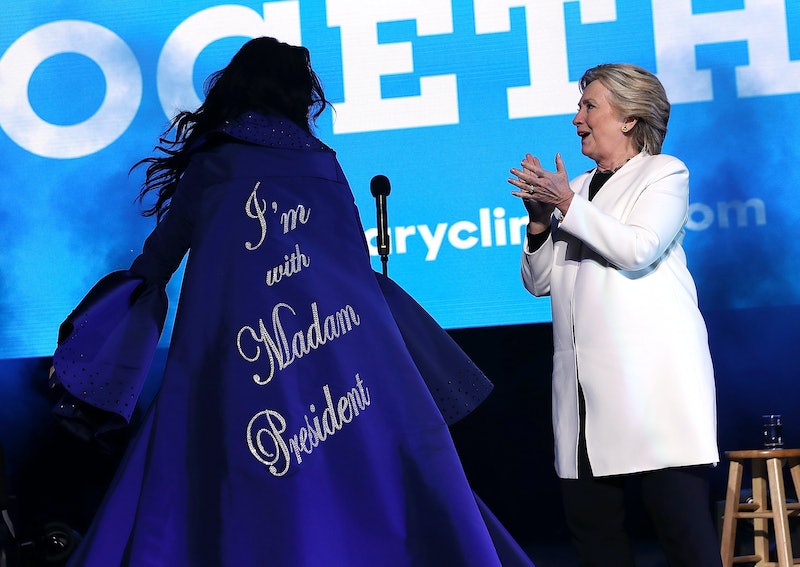 The word "Madam" has been popular lately. It's been plastered on capes, shirts, and headlines during the entire political season. If you're looking to abbreviate the word, there are a few things you should know first. So how do you abbreviate "madam"? Here's the breakdown.

With election day here, there's lots of talk about potentially having a Madam President for the first time ever. If Clinton gets elected to office, she'll actually be able to choose between Madam President or Mrs. President as her title official, as Bustle previously reported. She could also opt to use Ms. rather than Mrs. Clinton does have plenty of options, but in the event that she wins the election and chooses to be referred to as Madam, you might want to study up on proper usage of the word. The title comes from the French word Madame, which means Mrs. or "my lady" according to Free Dictionary. Pediaa.com explains that "Madam is a polite form of address for women, and according to Abbreviations, the appropriate way to shorten it is Mme.

Although you're technically safe to use the abbreviation for both Madame and Madam, you might want to spell it out unless you're really in a bind for Twitter characters in order to avoid confusion. Also, make sure to not capitalize all the letters in the abbreviated version, since MME has several different meanings.

Miriam Websters Dictionary defines the word as "used to politely speak to a woman who you do not know" and "used when you are speaking to a woman who has a high rank or position." If Clinton is elected, you could be hearing "Madam" a lot more often for the next four years.