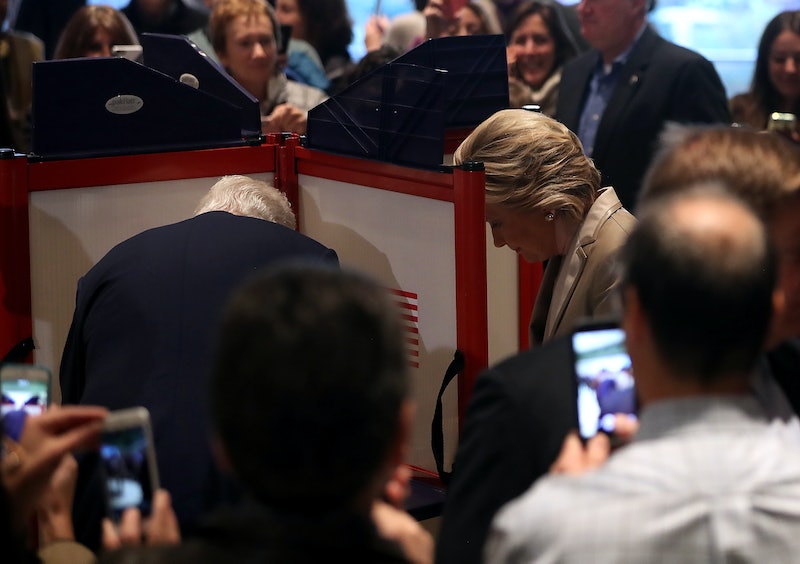 Let it be known: Nov. 8 will go down in history as the day that Nasty Women everywhere finally see their voices heard. After what feels like years of campaigning (and having to listen to Donald Trump be a terrible human in general) the day that we can finally vote Senator Hillary Clinton into the White House is upon us. It's no secret that today is an emotional day for many: It's been 96 years since women were given the right to vote in the United States, and many have waited that exact amount of time to vote a woman into office. In other words, decades. This has been a long time coming, and as a woman, I can't even begin to explain what a moving moment it was being able to cast a vote for Hillary Clinton, the first female majority candidate for President of the United States.

Many women of all ages have been feeling it too: In addition to the project I Waited 96 Years, a collection of powerful voting selfies from women who were born before the 19th amendment was passed in 1920 — aka, the amendment which granted women the right to vote — Nasty Women of all ages have taken to social media to share selfies of themselves at the polls making history.

As we all await news of the outcome of the election — which, I can feel in my bones will be good — take a look at just a few of those selfies, and, if you're a Nasty Woman yourself, take a moment to reflect: This is our time, everyone. It's finally here.

More like this
TikTok’s #NapkinChallenge Is The Chaotic Good You’ve Been Missing
By Sophia Moore
9 Funny Instagram Locations To Use On Your Next Post
By Siena Gagliano
What Does POV Mean On TikTok? The Popular Acronym, Explained
By Emma Carey
Here’s How To Get Verified On TikTok
By Emma Carey
Get Even More From Bustle — Sign Up For The Newsletter