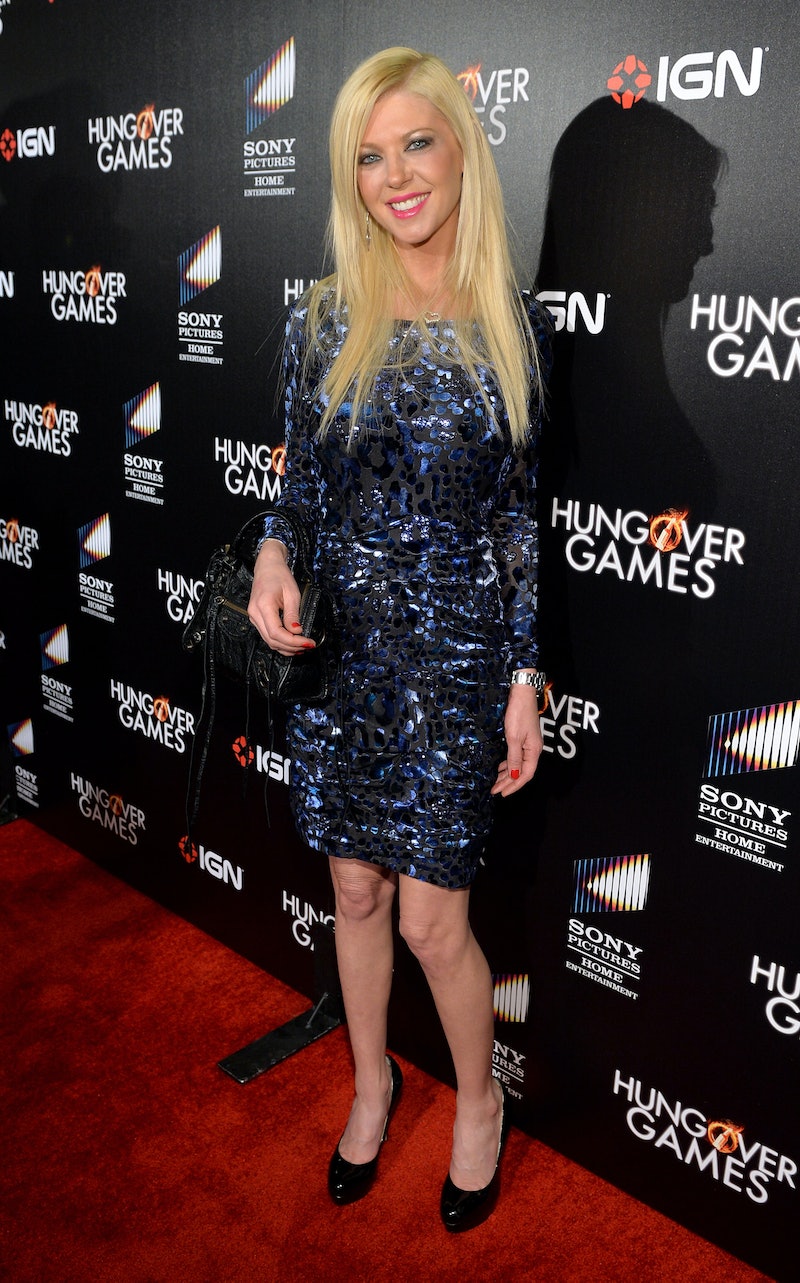 Tara Reid might be one of the luckiest girls on the planet. According to an interview with Australian radio show Kylie and Jackie O, Sharknado star Tara Reid admitted that she once kissed Tom Brady — also known as Gisele Bündchen's current husband and New England Patriots quarterback. The two are rumored to have hooked up in 2002, though Reid didn't give an exact timeline as to when this kiss supposedly happened. Reid admitted that she thinks the football player is "pretty cute," and clearly, we agree. And there's one thing we all can definitely agree on: He's a lot more charming than most of the guy's that Reid has allegedly dated.

Let's just say that, dating-wise, the early 2000s was a strange time for Reid. The starlet — who starred in films like American Pie and Josie and the Pussycats — was attached to several celebrities that will definitely speak to your nostalgia. From Joe Francis — creator of Girls Gone Wild, because class — to Carson Daly, Reid seemed to date everyone relevant to the pop culture scene. I mean, hello, she even dated a member of 'NSYNC! (Someone who wasn't Justin Timberlake, no less!) Looking back on Reid's dating life is like a who's-who of the tabloid scene of 2005. Just take a gander:

The current host of The Voice was famous for his time on Total Request Live on MTV, and, later, his own NBC late-night talk show Last Call with Carson Daly. But this couple met in the most 2000s way ever — he was VJing for an MTV spring break event, and she was a guest judge. They were engaged for nine months but eventually called off the marriage.

Ahh, the 'NSYNC member who wasn't Justin Timberlake. Chasez tried to strike out on his own solo career and cast Reid in his music video for "Blowin' Me Up (With Her Love)." The two casually dated in 2002 before Chasez was linked to Eva Longoria.

Sorry, Tara, but I have to say that I do not approve of this 2000s psuedo-celebrity. The creator of Girls Gone Wild and Reid were friends until Joe Francis opened his big, fat mouth and spilled details about his sex life. During an interview with Howard Stern's radio show, Francis told the radio host that he slept with Paris Hilton, Kimberly Stewart, and Reid — and that Reid was lousy in bed. Reid was understandably pissed and the two ceased their friendship.

Who can forget Limp Bizkit, right? (You might be raising your hand right now, I don't know. What did they sing, again?) Tara Reid was linked to lead singer Durst in 2000, but their relationship fizzled before it ever really began.

Tara Reid dated the Motley Crue drummer in 2005. The two hung out and partied in Vegas, because what else do you do when you're dating a drummer? The two dated for about a month before parting ways, but Tommy did call Tara Reid "pretty rad," which means something in drummer-speak.

More like this
'Derry Girls' Sister Michael Isn’t As Fictional As You Might Think
By Olivia-Anne Cleary
David Schwimmer Doesn't Remember This Classic 'Friends' Episode
By Sam Ramsden
Hayden Panettiere Will Return For 'Scream 6': "We F*cking Won, Scream Fam"
By Jack Irvin and Jake Viswanath
Joe Alwyn Reacts To Taylor Swift Earning An NYU Doctorate In A Rare Interview
By Jake Viswanath and Nicole Pomarico
Get Even More From Bustle — Sign Up For The Newsletter