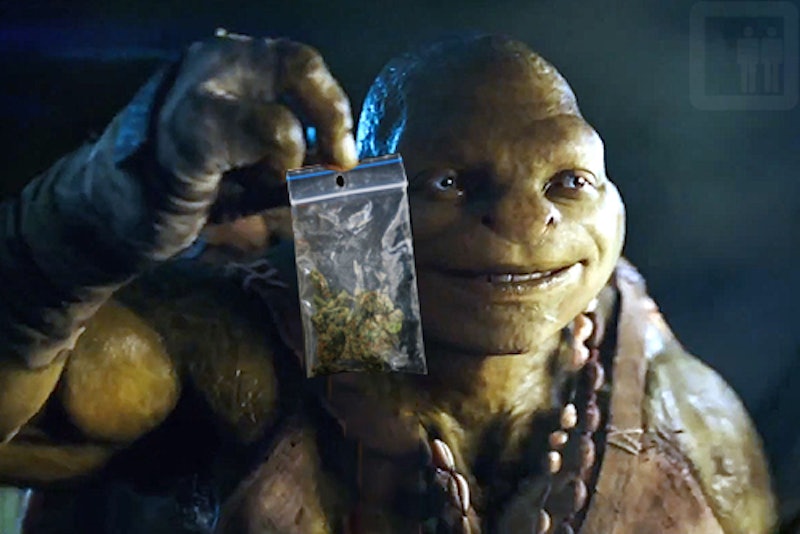 The official trailer for Michael Bay's Teenage Mutant Ninja Turtles has only been out for about a day and the denizens of the Internet have already taken it and run. It comes as no surprise that the trailer would give people lots to talk about — from how many liberties the director is taking with the source canon to just how creepy the Turtles' new appearance is — but one thing in particular really jumped out. The final scene of the trailer features Megan Fox as April O'Neil running away from the human-sized talking turtles that land in front of her on the rooftop. As Leonardo stands menacingly on the edge of the roof making excellent dramatic use of light and shadow, Michelangelo, removes his mask and holds it up to show Fox that she has nothing to fear.

That single shot became the subject of a hilarious meme featuring Michelangelo holding up everything from a photograph to a second mask, as if he'd removed his to show that he'd been wearing two of them. Although Fox's character would probably be no less reassured to be staring at a bag of weed instead of a giant turtle without a mask, the meme does give us something to focus on besides the new design of the turtles, which features overly large noses, human-like lips, and heads that are shaped more or less like that of an infant.

Okay, so the overall effect is still a little creepy, but that doesn't make the meme any less funny.