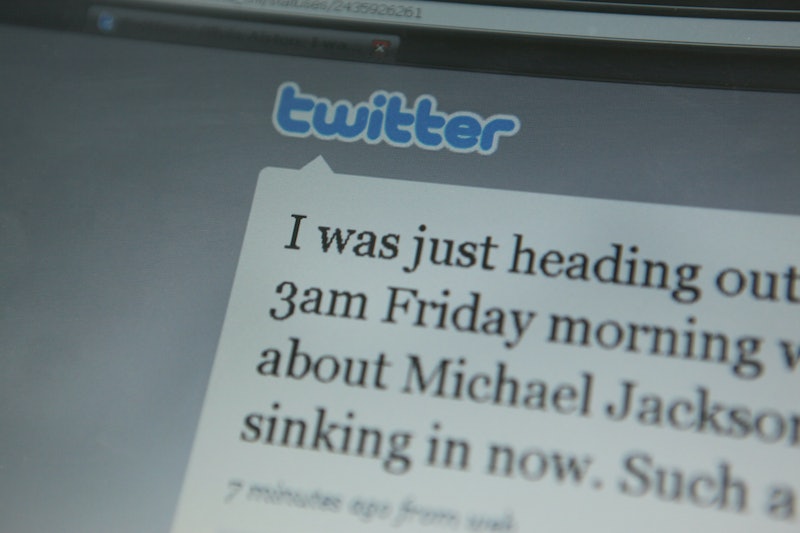 I hope you aren’t too attached to the term “retweet,” because you might have to say goodbye to it soon: Word on the street has it that Twitter is phasing out the phrase in favor of the slightly clunkier “share with others.”

According to TIME, the change can be chalked up to Twitter’s desire to make its social network “more engaging.” Its community isn’t growing as quickly as it once was; additionally, new data shows that an awful lot of people who sign up for the service don’t end up using it regularly. But hey, it’s not all bad! After all, we’ve dealt with bigger social media changes before. Remember these seven features that have since gone the way of the dinosaur?

Once upon a time, way back when I first joined (not that I’m dating myself or anything here), there was none of this “status” nonsense on Facebook. Then, when the status update feature was first introduced, it took the form “Lucia is…” It was only after a wide-reaching online petition was mounted in 2007 that the “is” vanished. No more “Lucia is wanting to curl up in a ball because she hates talking about herself in the third person!”

These days, most Twitter users tweet from the Twitter app on their smartphones or tablets, or even straight from their computers. So why are we limited to 140 characters per tweet? Because back when the idea had just arisen, smartphones weren’t the norm. Twitter was intended to work with most mobile phones’ SMS abilities — which were usually limited to 140 characters per message.

Originally, “Twitter” was spelled without vowels. Presumably this had something to do with saving space on the 140-character capacity of each tweet.

Fun fact: What most of us still refer to as the “Wall” actually hasn’t been called that since December of 2011. That’s when the whole “Timeline” thing was rolled out. The original Wall didn’t even let you attach things like pictures or videos; until 2007, they were text-only.

I remember vividly when the News Feed first hit Facebook. It was my senior year of college, and one morning, we all woke up, logged into Facebook… and found ourselves positively flooded with information about every single thing that all of our friends were doing right that very minute.

Although there was initially even more opposition to the news feed than there was to the “[Your Name] is…” statuses, this was a fight we decided not to fight; eventually, we got used to it, and now it’s just kind of a way of life. But sometimes I find myself longing for the simpler days of a plain white screen that didn’t tell me exactly what everyone I know was having for lunch that day…

It’s not that Twitter has actually retired this most beloved of error messages — rather, they’ve simply solved the problems that caused its widespread popularity in the first place. After the 2010 World Cup continually crashed the social network’s servers, they finally buckled down and made the whole system more reliable. This effectively tamed the fail whale, which we have seen only rarely in the years since. Siiiiiiiigh.

Don't remember Google Buzz? Don’t worry. No one else does, either.