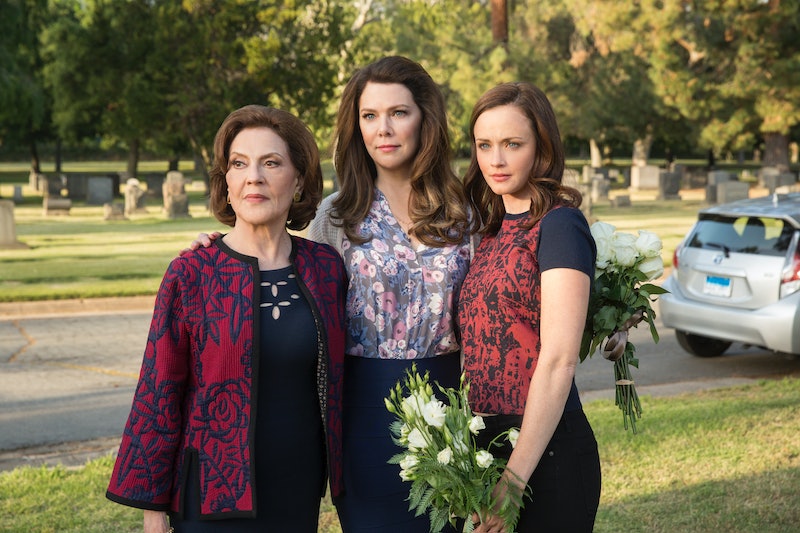 The fact that the Gilmore Girls revival has such a specific title, A Year In The Life, and specific seasonal episodes points to this year being an important year for everyone. We're popping back in with these characters and this family for a reason, though that reason is still unclear. What kicks off this year in the life of the Gilmore girls? An interview that Lauren Graham and Alexis Bledel did with Entertainment Weekly gave more credence to the theory that Rory comes home for Richard's funeral in Gilmore Girls: A Year In The Life , but it's not totally confirmed yet.

"Rory has been working in the field of journalism for eight years," said Bledel about where her character is in the revival, "and the field changed very dramatically when she started. So, she probably had a bit of a rude awakening and had to roll with it. She has been chasing stories wherever she can, staying with friends in different cities in the process. She is coming back home to go to her grandfather's funeral and see her mother, who she hasn't seen in a long time — and that's where we pick up."

So, that seems to confirm that Richard's funeral will be in "Winter," the first episode of Year In The Life. However, the pictures of Rory, Lorelai, and Emily in a graveyard (above) were labeled "Summer" in the Netflix press materials. Perhaps they visit the grave every season. Emily definitely seems like the type of person who would want to rotate seasonal flower arrangements. Plus, nobody wants to stand outside for very long in Connecticut winter. They could be saving an outdoor service for warmer weather.

That also doesn't answer every question. Even if Rory initially returns to Stars Hollow for Richard's funeral, we still don't know why she potentially ends up staying there for a whole year. Does she move back in with her mom, or her grandmother? That's very on brand for older millennials experiencing existential career crisis. Maybe she is just visiting every couple of months. That said, mandated family time is part of the Gilmore Girls origin story, and so I feel like something in "Winter" is going to result in Friday Night Dinners being reinstated.

The interview also implied that Richard's death motivates the themes of the revival as well. "It raises a question for the three women," said Graham, "[encouraging] their journey of 'what next.'" Rory is having a quarter-life crisis, with her career not going the way she anticipated. Lorelai is experiencing a mid-life crisis, and Emily is adjusting to her new identity as a widow. The actor Edward Hermann died in 2014, months before the revival was even a twinkle in Netflix's eye. I like the idea that his passing may have inspired more than just his own character's death in the Gilmore Girls revival.