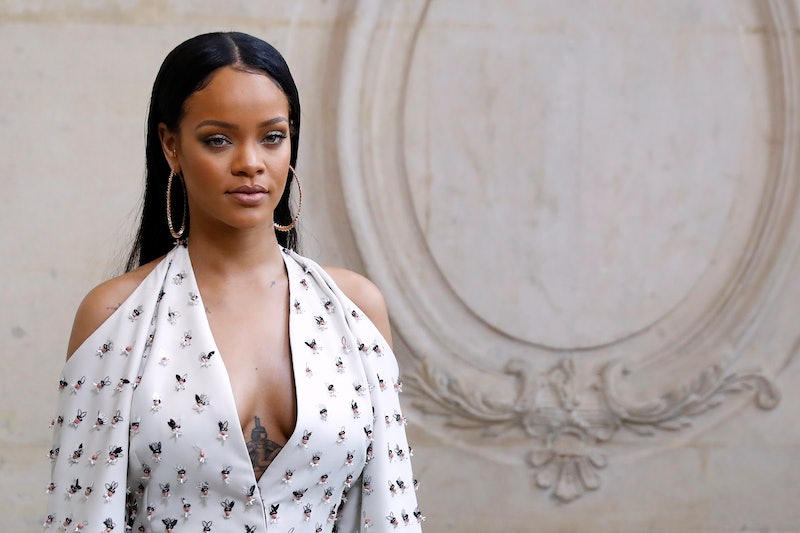 Just when we thought our own "I'm With Her" election day merch had reached it's peak coolness (seriously, though, those Madam President shirts are legit) Rihanna took to Instagram to blow us all out of the water with her political ensemble. Rihanna's Hillary Clinton shirt for election day is the epitome of #GirlPower, and shows off two of the baddest-ass women of our generation in the best way possible.

Remember when Ryan Gosling and Macaulay Culkin kept wearing those #meta T-shirts with pictures of each other on them wearing t-shirts with pictures of each other on them (my head hurts from trying to describe it, but you get the point)? In honor of the election, BadgalRiRi took a page out of their fashion playbook showed her support for Hillary Clinton with a meta t-shirt of her own. On Tuesday, Ri posted a photo of herself to Instagram wearing a t-shirt with a picture of her wearing a T-shirt with Hillary Clinton on it. Stamped across the front, in bright red letters, is an updated Clinton campaign slogan that reads, "I'm with her. And her." Like I said, two of the baddest-ass women of our generation on one T-shirt? Yeah, Rihanna wins.

Considering how outspoken Rihanna is on every other day of the year (which is why we all love her so, so much), it's no surprise that she would take to social media to support her candidate and urge her followers to vote.

Now, the only question is — when will we get to see Hillary Clinton wearing a shirt with a picture of Rihanna in this shirt on it? Talk about the best possible way to celebrate a presidential win.