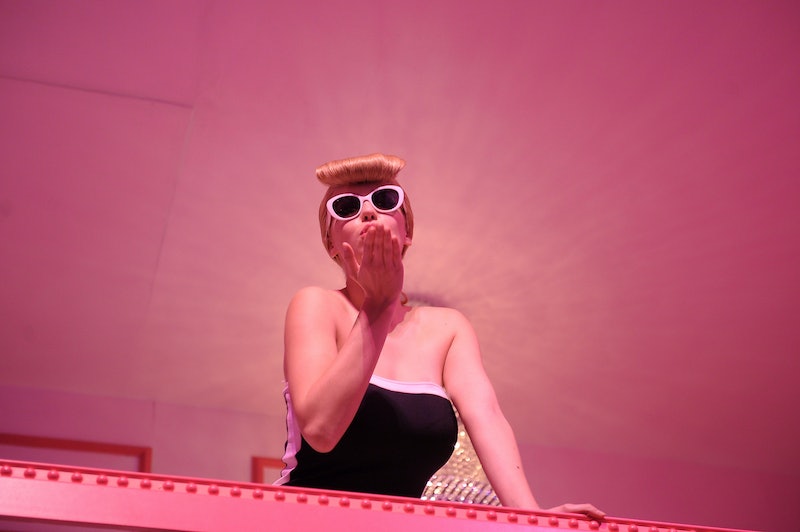 Bimbos finish first. At least, so thinks Ona Anosike at xoJane, who argues that the best way to get ahead is to wear skimpy clothes and talk like a Valley girl. Surely, all smart pseudo-Bimbos must know peppering their speech with loud oh my gods and filing their nails in class won’t get people to take them seriously? According to Anosike, that’s the whole point:

I put on my trashy, super-tacky armor almost everyday in order to gain respect.

What benefit does this get me? Tons. People want to be around me more because I come off as non-threatening. Men include me in their conversations, Professors call on me with amused expressions and since I initially fulfill my role as a “female,” i.e., submissive, shallow and lacking ideas, my thoughts and presence are welcomed with open arms.

Hmmm. Anosike’s embrace of her “non-threatening” vibe is one of my main gripes with this piece. By acting non-threatening and submissive, especially around men, Anosike is helping to perpetuate the idea that women should be less assertive than their male counterparts in academic and professional environments. The strange thing about Anosike’s behavior is that it appears to be affected:

I have to admit that my Bimbo ways are a bit of a sociology project. I like to get a reaction out of people when it comes to my looks and mentally note their responses. Blame years of uniform and dress code on that. Also blame the fact that I am kind of a narcissist and semi-obsessed with myself.

Anosike’s argument becomes a bit muddled here. Is a Bimbo someone who enjoys fashion? Or is it, as she seems to argue in most of her piece, a girl who purposefully dumbs herself down? Because there’s an important difference. I’ll be one of the first to get excited about finding the perfect red lipstick (and I know I’m not alone). But I don’t feel the need to hide behind my pout; instead, I use my voice as confidently as I can to express what I hope are well-articulated and strong opinions. Why wouldn’t I want to be taken seriously?

Whatever image of yourself you project, that’s what people will think of you. If you think what you’re saying is important, they will, too. If you act like you have nothing relevant to say, no one will bother to listen. Although Anosike may be chuckling at people’s obliviousness to her savviness, she runs the serious risk of having people look right past her. But, apparently, she’s all over it:

You see, life is not fair. I will without a doubt be underestimated and poorly treated because of the way I look. But I am the type of person that likes to be two steps ahead of the game. So when I go into any collegial or intellectual environment, I look dumbed-down for a bit, and then totally invert the dynamic of that same environment.

Ah, so Anosike is just a clever trickster, reversing endemic oppression! No mention of why men have to be tricked into taking women seriously, though–unless it’s all part of Anosike’s entertainment. Well, it’s all fun and games until someone doesn’t get a job. Anosike will most likely have to compete with women–and men–as smart as she is who own it and make a lasting first impression, perfect diction and all. In the time it takes Anosike to establish her Bimbo image and then turn the tables on those who underestimate her, the girl who doesn’t waste her time will already have gotten the job.