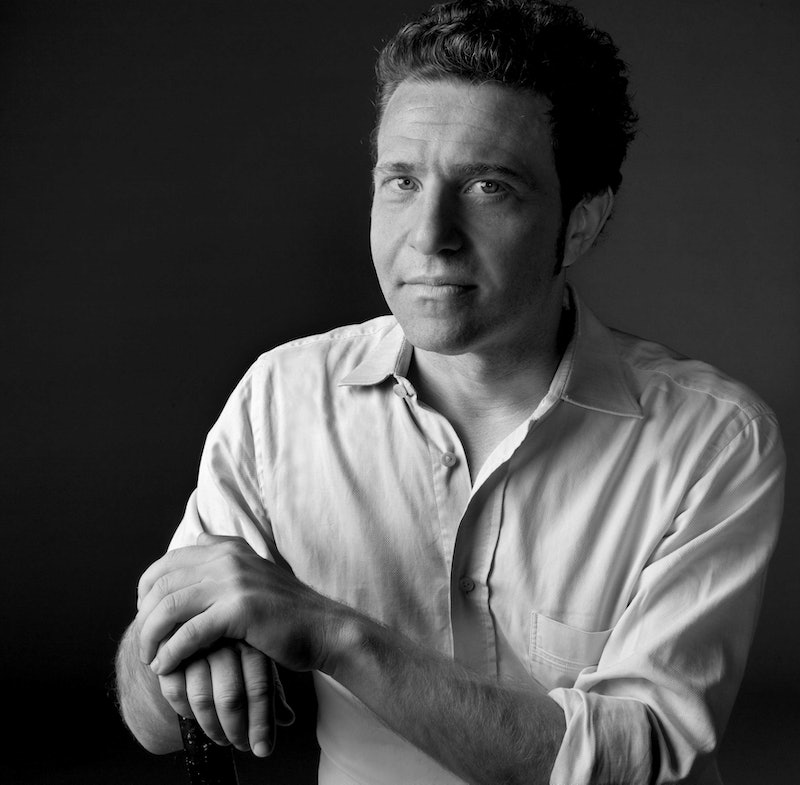 Though being a novelist is impressive enough, David Gordon is more than a highly stylized and entertaining mystery writer. He's a professor, a moderator for the Proust Society of America, and a great conversationalist. Gordon has the charm and good looks of Jere Burns, who played Lindsay Lohan's dad in Life Size, and the intellect and curiosity of Justin Kirk (Andy from Weeds).

Reading Gordon's newest novel, Mystery Girl (New Harvest), is like talking to him in person: You don't want the anecdotes to end; you could soak up his effortlessly paired humor and wisdom forever. It's part mystery, part love story, wholly delightful. After his wife leaves him, Sam Kornberg, a Los Angeles novelist/clerk/driver/delivery boy adds another odd job to his resume: He accepts the role of Assistant to a hugely obese and hugely brilliant private eye. What starts as a simple tail job becomes a murderous, lovelorn chase entwined with Hollywood snobs, shootouts in Mexico, obsessed film geeks, and, most importantly to Sam, his wife.

Discussing Mystery Girl with Gordon over cookies and coffee in Brooklyn shed perspective on more than just his work — Gordon offered his views on navigating the world, and our conversation turned out to be unmysteriously gratifying.

BUSTLE: Let's talk about your love of mysteries. Where does your interest in the genre come from?

DAVID GORDON: Well, it goes way back. Edgar Allan Poe was the first serious writer I ever read. But I never really wrote mysteries — I wrote a lot of poetry — until I was urged by my agent and my thesis advisor, who said I really should write something with a story. And I am a kind of post-everything writer, so I thought about what types of stories I relate to. I really love genre narratives that fit form. It's almost poetic form. It's limitless: I just did what I wanted to do with it.

The way you wove the story was really impressive.

Thank you. That was really hard. And I didn't necessarily set out to write a mystery. I originally wrote a version of this novel as a five-page short story before I wrote The Serialist. And then after writing The Serialist I really became obsessed with the idea of plot, and I made it a goal to be able to write something shapely and complicated.

The way you describe your struggle with narrative and plot reminds me of the protagonist of Mystery Girl, Sam, who struggles as an experimental novelist.

Well, for some degree I always start with myself, because where else am I going to start? And I think I'm also lazy. I tend to think of the situation, and to have a protagonist be a nun in 12th Century Italy would require a lot of work. So why not have the guy be around my age, and why not make him Jewish? But then as the character grows, he takes off in different tangents from me and become not me at all. In The Serialist, the protagonist is someone who, if he were my friend, would be someone I admire. With Sam, though, Sam is someone who's never been successful as a writer. It's very different.

I did go through this feeling of having embarked on a journey when you're young and you sail off to become this thing and 25 years go by, and not only does it not happen, but suddenly you wonder why did I even want this in the first place? And you see the collateral damage that this can have on your self-esteem and your relationships. I myself eventually had some good luck, but I definitely relate to the Sams of the world.

And that's why I included all of the obsession with movies and the film nerds in this novel. I wanted to touch on the idea that there is a whole culture of people whose core values may not be worth anything to the rest of the world — whether it's experimental literature, or painting, or underground film, weaving tapestries, pottery. There are so many vocations that demand everything from you, but the world decides it's worth very little.

I know. In a bigger sense, I think that's one of the more tragic things about the world. If people just understood that other random people are so incredibly like us, and those differences are really pretty minor in the grand scheme of things. I think it'd be a lot harder to be rude to other people on the subway, but also to kill them or take their stuff or fire a rocket at them. I think that's a blindspot that we all have.

Who are your favorite mystery writers, and who influences you as a writer?

Oh man. There's a lot. To start with, Poe, Conan O'Doyle, of course, and in the sort of more hard-boiled tradition Dashiell Hammett and then Raymond Chandler. Those four should be on every reading list, just as literature. I read a lot of mysteries, so I could go on and on ... it's just great American prose.

Do you get to teach these writers?

I do. And I also teach Proust, and I lead the Proust Society's monthly meetings. I am very much the nerd who is obsessed with both hard-boiled mystery writers and Proust, and that's why they all show up in my books.

I want to hear more about this Proust gig!

I got recruited to do it, which was pretty ridiculous. The lady who runs the Proust Society, luckily, was a fan of my book. So when she was looking for a leader and someone who teaches Proust, my name popped up, and she asked me to do it. I told her that I love Proust and have read the books over and over but am in no way a Proust scholar. She said I could bring the novelist's perspective, and I said that is definitely the one thing I will not do: compare myself to Proust.

Tell me about the setting of this book — why L.A.? Have you lived in L.A.?

I lived there for much of the '90s. While I was at Columbia, a screenplay I co-wrote got optioned. I took six months to go out to L.A. with my writing partner to see what happened.

It's somewhat cool, but nothing ever happened. It never got made. But I ended up staying out there for a long time. ... I never really questioned why I set the book there. There isn't a specific reason it has to be set there; I just always pictured it there. A part of me wanted to write about L.A. and had these places where I wanted things to happen. The idea for the book was very much a conglomeration of things that stuck together, and one of those things was all of this stuff in the back of my head about L.A. that I wanted to write about.

What are people supposed to take from this book?

Well, I don't think the best way to write is to always know what you want people to take from a book ... but I think in a bigger sense, and I know this sounds corny, but people should be able to relate to the larger mystery of love. ... When you put it so bluntly, it sounds silly, but love is a mystery, and in a way that only gets more unfathomable. It's not a mystery that gets solved. ... Love is like this weird investigation where you're gathering more and more evidence, but not necessarily getting the full picture.

What are you working on next? More mystery novels?

I have a book of short stories that's in my editor's hands. One of the things I did between freaking out about my novels coming out is I wrote short stories. ... I used to say a short story is a wild fling and novel is like a marriage, but then I realized that means I think of marriage ending every three to four years, and I didn't really like that. But I do think there's that sense where a short story is an idea I jump into, and with a novel I tend to think for a while and set off on an open-ended journey. But in practice, I almost always end up wrong: I almost never write the story I thought I would.

What advice, as a teacher and a novelist, do you have for writers who want to start writing short stories or even novels?

It is important to divide those roles. As a teacher, I can say a lot. I am almost always 90 percent confident that the line edits I make will make a student's writing better. I don't feel insecure about that. I make line edits or content edits so that their writing will improve. But as a novelist, I would say, "Who knows?" Because I don't know. I wake up every morning and look at a blank page. And you have to love that at least a little bit more than you hate it, because it's not going to get any better. You're definitely going to hate it, but if you love it just a tiny bit more, that'll make you do it.