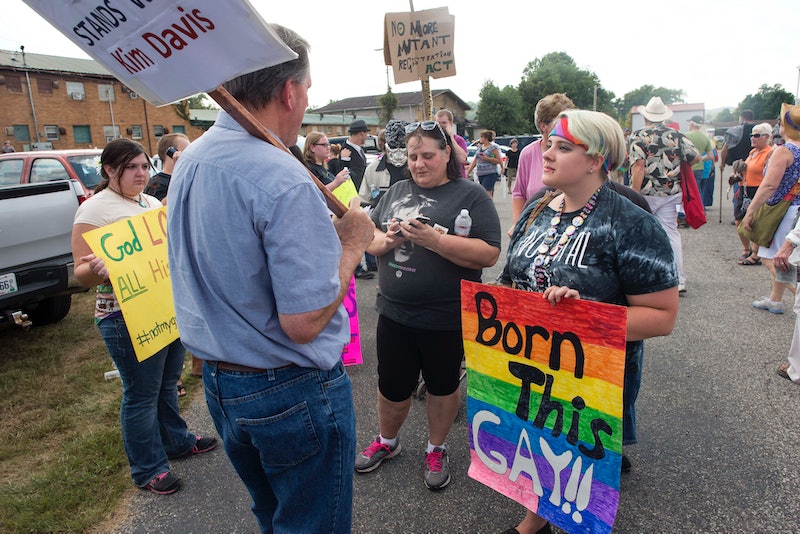 American citizens are now forced to confront that, according to the Associated Press, Donald Trump is the president-elect. But what does a Trump presidency mean for gay marriage, and gay rights in general? Trump has said he would try to overturn the gay marriage Supreme Court decision. This would be quite the feat, but it is possible: he'd have to appoint a conservative judge to the seat left vacant by Justice Antonin Scalia, as well as more judgeships that might open up during his presidency. Then, a case would have to be brought against Obergefell v. Hodges, the decision that ruled in favor of marriage equality, and the Court would have to rule in favor of overturning marriage equality. If Trump's administration can do all this, then gay marriage could once again potentially go back to being a state-by-state issue, and the most conservative states would almost certainly prevent gay marriage from occurring.

Donald Trump has flip-flopped on his views on LGBTQ rights since he first contemplated a run for the presidency in 2000. Sixteen years ago, he declared that "the institution of marriage should be between a man and a woman." Since then, Trump has continued to state that he does not believe in "non-traditional marriages," implying that he doesn't support LGBTQ rights in general. He definitely doesn't agree with the Supreme Court's 2015 to make gay marriage available across the country, as he's stated that he believes the question should be left up to the states.

Trump told Fox News in January, "I wish that it was done by the state. I don't like the way they ruled":

I disagree with the Supreme Court from the standpoint they should have given the state — it should be a states' rights issue. ... This is a very surprising ruling. And I — I can see changes coming down the line, frankly. But I would have much preferred that they ruled at a state level and allowed the states to make those rulings themselves. ... If I'm elected I would be very strong in putting certain judges on the bench that maybe could change thing, but they have a long way to go.

His running mate, Pence, is also notoriously against gay marriage. However, Trump has promised to protect the LGTBQ community from terrorism, as he declared during a speech after the Orlando shooting... whatever that kind of promise means. Given his inflammatory statements about depriving Muslim Americans and women of their rights, you've got to wonder whether he'd actually keep his word on any promise to protect queer individuals.

More like this
In Elizabeth Strout’s Novels, The World Changes But People Stay The Same
By Morgan Leigh Davies
These Memes & Tweets About Alicent in 'House Of The Dragon' Prove She's The Queen Of Messiness
By Grace Wehniainen
There Are Lots Of Cheap Ways To Upgrade Your Home, But Designers Say These Make The Biggest Impact
By Hannah Lynn and Karen Belz
How Much Are The 'Schitt’s Creek' Stars Worth?
By Hugh McIntyre
Get Even More From Bustle — Sign Up For The Newsletter