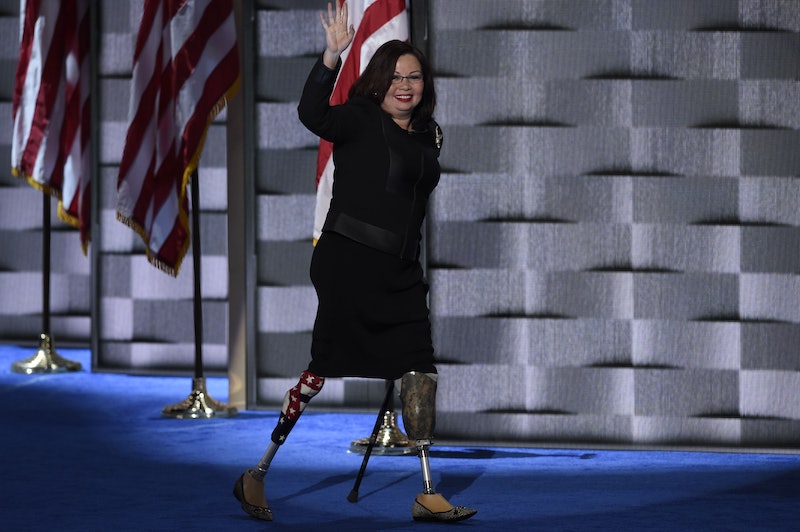 While the 2016 presidential election may yield a vaguely Republican president, Donald Trump, the election has also produced several exciting new female senators who are breaking barriers no matter who our next president is. These women represent multiple underrepresented minorities in the American government: Illinois' Tammy Duckworth is a double amputee; Nevada's Catherine Cortez Masto is the first Latina woman ever to be elected to the Senate; Kamala Harris of California is only the second black woman to win a Senate seat in American history; and Pramila Jayapal is the first Indian American woman to be elected to the House of Representatives.

What do these exciting new Senate appointments mean for the rest of us? After all, the House and Senate are surely not as visible as the president. But the two houses of Congress are critical, representative parts of the legislative branch of the U.S. government, and on top of that, the path from Senator to President is not unfathomable — remember then-Senator Barack Obama's election in 2008? And his reelection in 2016? Those were the days. But fret not: fresh faces in the Senate and the House mean a new page for the rest of us, and as the clichés say, a journey of a billion miles begins with probably a couple of steps, or something like that. Every "first" is a mark of progress.

Duckworth defeated incumbent Republican Mark Kirk to become a senator for Illinois. Duckworth was favored to win the race, largely because Illinois is a heavily Democratic state, but also because Kirk was unable to successfully disassociate himself from Donald Trump. Duckworth has proven herself worthy of a Senate seat in her own right: a biracial double-amputee who lost her legs serving in the Iraq War, she has encouraged the country to accept refugees from Syria's civil war. In an op-ed for the Chicago Tribune, Duckworth wrote:

So let us reject the cynics and fearmongers who question our country's ability to conduct effective security screenings that balance safety and freedom. America must be resolute in the face of terror and never allow our enemies to scare us into retreating behind walls and abandoning our values. Even as we work to destroy Islamic State, we must feel compassion for its victims...

Harris, from California, is only the second black woman ever to be elected to a place in the Senate. Although more than 30 African American women have served in the House of Representatives in U.S. history, a black woman hasn't been elected to the Senate since Carol Moseley Braun in 1993. (She also has Indian heritage from her mother, and so also became the U.S.'s first Indian American senator.) Harris, who is California's first new senator in over 20 years, supports comprehensive immigration reform. She is also staunchly pro-Planned Parenthood.

Masto, from Nevada, is the first Latina woman ever to be elected to the U.S. Senate. As such, her election marks a major milestone for Latina women, who have been making their voices heard this election season.

In a joint ad for Hillary Clinton and Masto, Masto describes her support for LGBT Americans: "We can't tolerate leaving anyone behind."

Jayapal, the new congresswoman from Washington's 7th district, is the first South Asian woman to be elected to the position. She has been vocal in her support of racial justice, less debt for college students, and equal pay for women. Jayapal has vowed to be a "progressive" voice, and she has been endorsed by the American Federation of Teachers, showing her resonance with union members and the working class.

So while the presidential election might not be the outcome you want, these women are making history in the Senate, and it's an important silver lining.

More like this
Watch Jacinda Arden’s Devastatingly Honest Resignation Speech
By Sam Ramsden
25 Inspiring Quotes From Black Women To Celebrate Black History Month
By Kyli Rodriguez-Cayro and JR Thorpe
24 History-Making Black Women You Probably Didn't Learn About In School
By Ayana Lage and JR Thorpe
What The UK Blocking Scotland’s Gender Recognition Bill Means
By Sam Ramsden
Get Even More From Bustle — Sign Up For The Newsletter
From hair trends to relationship advice, our daily newsletter has everything you need to sound like a person who’s on TikTok, even if you aren’t.