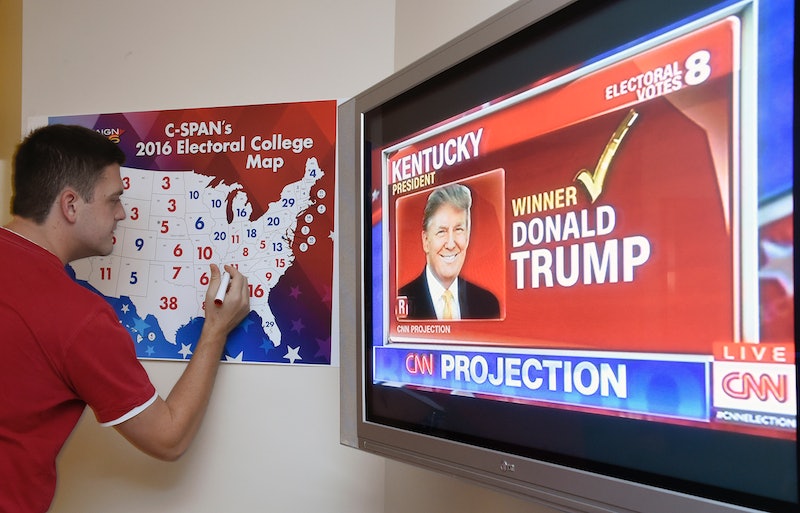 America has just elected to the presidency a man who says "grab them by the pussy." That sentence alone should be enough to prove that sexism is still thriving in America.

I've spent the better part of this semester discussing gender and sexuality, social conditioning and misogyny with my undergraduate writing students. We've read a ton of Rebecca Solnit, the Queen of Femsplaining. We've debated Donald Trump and sexual assault. We've reflected on our own prejudices. My students, who are mostly young women, have analyzed the culture that reinforces certain gender roles while also dismissing violence and harassment against women. Some have realized that they've been complicit in this culture, participants in the marginalization of their own gender.

But it wasn't enough. More than 59 million U.S. citizens dismissed women's stories and pain in favor of their own anger on Nov. 8.

Anger has driven the narrative of both the Trump campaign and his supporters. They're angry at Washington for purportedly ignoring their pleas. They're angry at immigrants for allegedly bringing criminality and violence to this nation. And they're angry at anyone who falls outside their very specific worldview — white, straight, male-centric. Who cares if our new president-elect has been caught on camera bragging that he allegedly sexually assaults women? It's not the "real issue" of the election. Let's talk about the "real issues."

OK, let's talk about some of those real issues. In order to make it in America, you need to be a white, wealthy, cisgender man. You could have little-to-no qualifications for the job. You could have a number of sexual assault and rape allegations. You could make derogatory comments about women and the queer community (among others). And still, you're believed more than the millions of women who've publicized their lived experiences to prove you wrong.

There'll be a lot of talk about how Trump's astounding win — and Hillary Clinton's sobering defeat — wasn't about America's fear of a woman in the White House. It'll be difficult to discuss Clinton's loss without speculating why or how America continues to fail to have a woman reach its highest political office. This is certainly a conversation that should be had, and there's always the surefire liberal feminist talking points to debate: that American voters still can't handle the idea of a woman behind the Oval Office desk, helming the military, making rational decisions. That any woman who doesn't smile, who doesn't appear "likable" or approachable, is calculating, intellectual and shrewd. That to be the first woman president, you can't openly exhibit those presidential qualities.

Yet the uninhibited theatrics of the 2016 election go well beyond those boilerplate anti-feminist attitudes about women in politics. Trump exposed the decaying roots of sexism and misogyny in America: It's not the "pussy" line but the dismissal by the American public that holds the most power.

In 1963, Betty Friedan wrote about "the problem that has no name." In Friedan's eyes, the "problem" held women back in nearly all aspects of their lives. Friedan's theory is partly credited for sparking the second-wave feminist movement, and that initial "problem" seems to be an issue settled in our mother's or even grandmother's generation.

In her 2014 book Men Explain Things to Me, Rebecca Solnit applied this concept to gender-based violence and #YesAllWomen in the wake of the Isla Vista shooting massacre. The problem now, Solnit argued, is the refusal to name certain acts of physical violence and harassment as what they are: hatred against women. Instead, the media — used as a stand-in for American society — continues to skirt the issue by focusing on other secondary factors. There's the gun debate, the mental illness debate, and even a debate about the victims themselves.

We've appeared to make an 180 switch in those two short years since the #YesAllWomen conscious-raising moment. The media openly labeled Trump's comments as sexual assault and sexual harassment. Journalists like Anderson Cooper and Megyn Kelly pressured Trump and his backers about the sexual assault allegations. Jake Trapper tirelessly tweeted about believing sexual assault survivors and not questioning why they wait so long to report the crimes. We openly named the problem, but the American electorate didn't deal with it. Is this the new "problem that has no name?" Solnit argued language needed to evolve to provide society with the tools to discuss and understand issues largely impacting women. What happens when we give society these tools, and they toss them aside?

During one of my recent class debates on Trump and sexual assault, a female student said she blamed women "for letting men treat them like that." You could've written her off as young and inexperienced, sheltered and privileged. Yet after seeing the results of the 2016 election, it seems like this is Trump's biggest victory: validating the sexism deep within both men and women. While we relished in our "pussy" and "nasty" moments, we're still left wondering how people knowingly covered their ears.