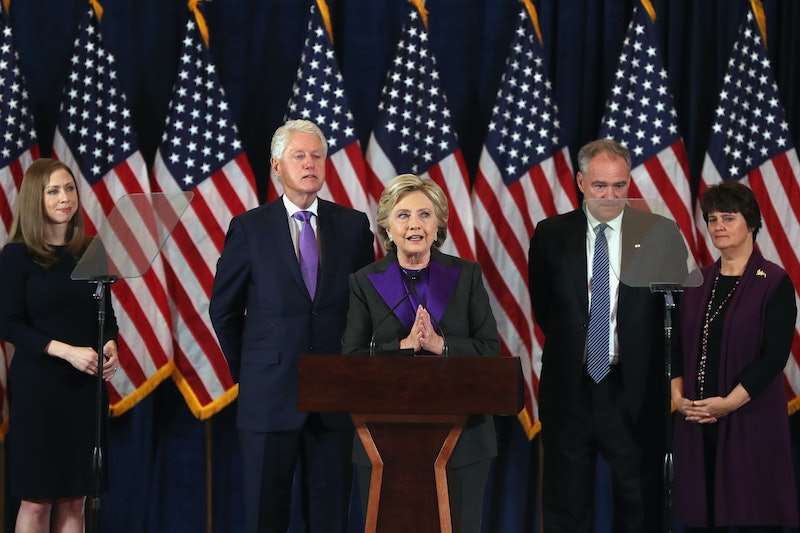 On Wednesday, Nov. 9, Hillary Clinton gave the speech that many people are still in disbelief that she'd ever have to give — her concession to Donald Trump. The election of Trump as America's next president-elect has shocked countless citizens, and on Wednesday morning, Clinton took the stage in New York to address the events of the night before and to encourage her supporters to come together during this difficult time. Unsurprisingly, Clinton's speech was emotional, with the candidate visibly moved by the chants of "Hillary!" heard from the audience, and with the content of the speech focusing on the incredible support she's received from so many voters, particularly women. Quotes from Clinton's concession speech touch on everything from the solidarity women have shown during her campaign to the little girls who can now know that they, too, have a shot at running for the country's highest office, and they're must-reads for any feminist voter.

"We spent a year and a half bringing together millions of people from every corner of our country to say with one voice that we believe that the American Dream is big enough for everyone, for people of races and religions, for men and women, for immigrants, for LGBT people, and for people with disabilities, for everyone."

Clinton's campaign was one of inclusivity, where all people, regardless of identity, could come together and know they had a leader who supported their rights.

"Many of you are at the beginning of your professional public and political careers. You will have successes and setbacks too. This loss hurts, but please never stop believing that fighting for what's right is worth it."

This is true for everyone, but for women especially, this quote resonates strongly, knowing how hard we must work to be seen as equals to men and find success.

"And to all the women and especially the young women who put their faith in this campaign and in me, I want you to know that nothing has made me prouder than to be your champion."

And we are proud to have had you as our champion, Hillary. This quote is a reminder of how many women and girls look up to Hillary as an inspiration, and worked tirelessly to help her succeed.

"Now, I know, I know we have still not shattered that highest and hardest glass ceiling but someday someone will and hopefully sooner than we might think right now."

For countless young girls, seeing a woman become the first presidential nominee opened the door to a world of new opportunity. Hillary may not be our president, but her success and perseverance has inspired so many girls and women — hopefully many of whom will go on to pursue leadership roles of their own.