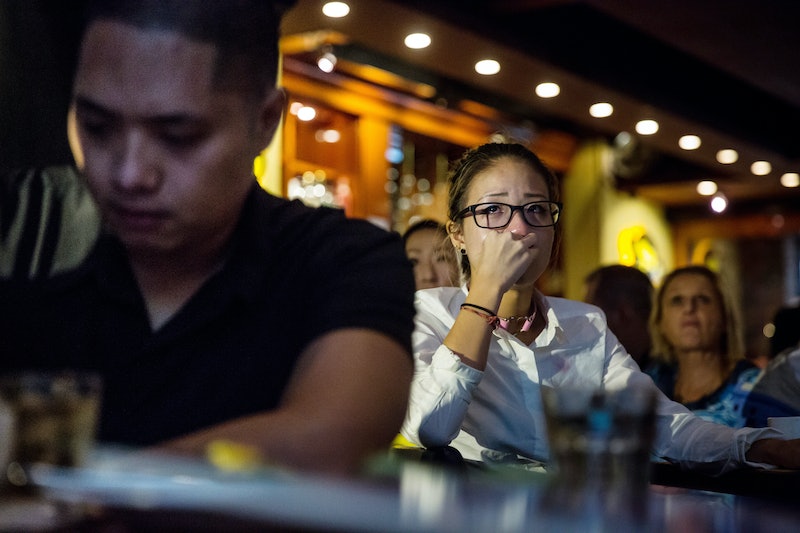 Well, the time has come. The 2016 is finally over, and it ended with Donald Trump as the president-elect of the United States, and many, many people are unhappy about that. The Twitter hashtag #NotMyPresident is trending as some Americans express their distaste for Trump, and it's proven that plenty aren't all too thrilled about the outcome of the 2016 presidential election.

Social media has changed politics in a number of ways. It's given everyone a platform and has caused several politicians some real trouble. More than anything else, it gave people an outlet to voice their opinions. And after the results of the 2016 election came in, people have taken full advantage of that aspect.

The hashtag #NotMyPresident popped up on Twitter shortly after the election results, and has racked up hundreds of thousands of tweets since then. People of all genders, races, and political affiliations have responded with fear, sadness, and anxiety about the future of a Trump presidency. These same people are taking to the social media to voice their unhappiness. Here are some of the most powerful #NotMyPresident tweets to show just how torn people are by the outcome of the election.

Some are expressing their physical reactions to the news.

Already planning for the future.

The passion is real, people.

The madness has already begun.

Four years of emotions are flooding everyone at once.

Bottom line: people are using Twitter is an outlet, and it's not stopping anytime soon.

More like this
Why TikTok Is Flooded With Controversial Videos About "Pick Me Girls"
By Courtney Young
This TikTok Song About An Unrequited Romance Has FYPs In Shambles
By Emma Carey
On TikTok, "Cbat" Has Been Named The Worst Sex Song Ever
By Lexi Inks
Camilla Paid Tribute To The Queen In A Heartfelt Video Message
By El Hunt and Sam Ramsden
Get Even More From Bustle — Sign Up For The Newsletter