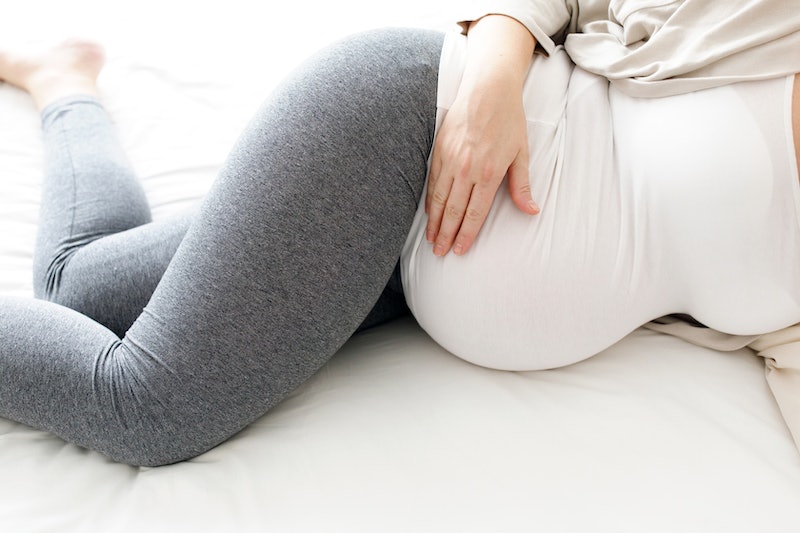 Pregnancy sex is perfectly safe. Yet for many, it still seems a little... weird, and possibly dangerous. "There is a common misconception that having normal intercourse can injure the developing fetus. I joke with my expecting parents that they shouldn't give themselves that much credit," Dr. Jamie Lipeles D.O., an OB-GYN, tells Bustle. There's no reason to stop having sex once you've boinked your way into creating another human.

"Sexual activity is commonly safe and enjoyable in pregnancy," Dr. Lipeles says. "The baby is well protected from injury from intercourse by the cervix, bag of water and distance from where the intercourse is occurring." No, penetrative sex won’t hurt the fetus. He does note, thought, that pregnancy sex should be on the mild and mellow side, as opposed to rough, because you don't want to risk causing injury or bruising.

2. But You'll Want To Choose Your Position Carefully

If missionary is your go-to, you’ll probably need to experiment with new positions, given that an expanding belly might be in the way. "There are very few restrictions in the sexual activity during pregnancy," Dr. Lipeles says. "However, if a certain position, depth, or activity causes pain or bleeding, the expecting mom should notify her obstetrician and refrain for intercourse until she is examined." Of course, digital sex should still be considered very much on the table.

"Intimacy leads to a much-needed endorphin release in the pregnant person, to help them relax and enjoy the pregnancy," Dr. Lipeles says. Endorphins, if you don't remember from Legally Blonde, are the hormones made by your pituitary gland that help reduce pain, enhance satisfaction, minimize stress — in short, make you happy. They start moving through your body during intimate situations along with the hormone oxytocin to provide your brain with a one-two punch of pleasure. Endorphins are also released during exercise (think "runner's high"), which is worth noting if you'd characterize your sex life as athletic.

You may also have a more intense climax, thanks to increased blood flow in your genitals. Many women even say that pregnancy sex is the best they’ve ever had. Still, one 2015 study of 168 women showed that as gestation progressed, the pregnant person's interest in sex and number of orgasms went down, so pregnancy orgasms might look a little different for everyone.

5. But It Won't Cause You To Go Into Labor

Orgasms will not trigger premature labor, even though they cause uterine contractions (which are entirely different from the contractions you experience during pregnancy). These contractions may last for a few minutes after sex, and that’s perfectly OK.

While some people will experience a boost in sex drive during their pregnancy, others experience a total absence — whether it’s down to the nausea, extreme tenderness, or fatigue. Dramatic fluctuations in sexual desire are pretty typical and shouldn't concern you too much, according to research published in Journal of Clinical Medicine in 2020.

There are some possible side effects to pregnancy sex. For instance, your breasts might leak as they begin to prepare for baby-feeding duties. This is mostly likely to happen in the second trimester, between weeks 13 and 27 of pregnancy. Leakage from the nipples during sex in this period isn't actually milk; it's a yellowish discharge called colostrum, or pre-milk, and isn't a sign of illness.

8. There Are Other Side Effects You Should Tell Your Doctor About

After intercourse, your cervix might bleed slightly, because of increased blood volume. This is most likely to happen in your third trimester, but Dr. Lipeles says that if you notice any bleeding, you should get checked out.

9. There's One Important Precaution To Take

If you decide to have oral sex, it is important that no air is blown into your vagina. Yes, really. This can actually send an air bubble into your bloodstream and possibly block a blood vessel, harming you and the baby. A study published in Journal of Basic & Clinical Reproductive Sciences in 2013 found that while this is very rare, it seems to cause the most problems in third-trimester pregnancy.

10. And One Last-Minute Reminder

You may have heard that sex can induce labor when you're full-term, but the science isn't quite clear on whether this is the case or not. Either way, it's not recommended to have sex after your water breaks. This can cause infection. After the water breaks, any sexual activity is more of a hindrance than a help.

It's understandable for either party to feel a little uncomfortable with the idea of pregnancy sex. Talk about it. And remember, there are a lot of fun things you can do besides intercourse in the nine months between conception and parenthood.

This article was originally published on April 3, 2014