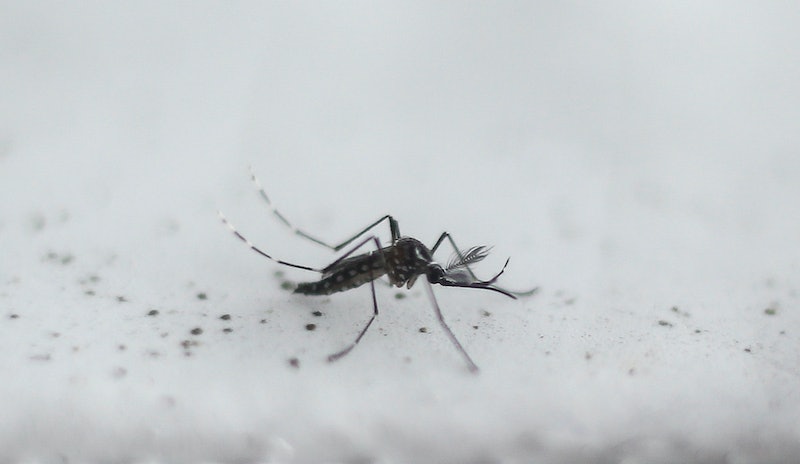 Guys, I know things are rough right now. I know that you likely don't want to do anything except argue about popular votes versus electoral colleges and then hide under the covers with chocolate. However, I do have some news that might cheer you up: While the election is giving many people intense distress, there are developments happening in the scientific world that indicate that, in certain ways, we are still moving forward and creating a better world — in this instance, by creating breakthroughs for humans with illnesses including ovarian cancer, depression, diabetes or Zika virus. Brains and logical collaboration are still producing excellent new ideas that are fostering progress and helping the human race. I thought you'd like to know about that today.

Here's something else to give you both pride and concern: four out of five of these astonishing new breakthroughs were discovered by American-based scientists, which is an indicator of just how important the American scientific and research community is. Scientists across the USA, however, are now concerned about its future under the new government; Nature has reported that immigrant scientists fear for their future in the US, and that research funding is seen as endangered considering the president-elect's past anti-scientific views. It is more crucial than ever that we celebrate the efforts of American scientific institutions and note their importance for the benefit of the species in the 21st century and beyond.

There May Be A New Type Of Antidepressant

The current antidepressants available to sufferers of depression are focused on neurotransmitters like serotonin and norepinephrine — but another neurotransmitter may have just been added to the family, raising the possibility of new therapeutic treatments for depression and other psychological issues in the future. Scientists at Penn State increased the brain production of a neurotransmitter called GABA (gamma-aminobutyric acid) in mice, and found that it had mood-alleviating effects similar to traditional antidepressants.

We already knew that GABA and its receptors in the brain had some role in depression; research in 2011 showed that variations in its receptors changed how the brain reacted to antidepressants, indicating that it somehow impacted mood in general. This new research, though, indicates that something interesting is happening with GABA that we hadn't previously understood. There are drugs on the market that increase GABA in the brain, called benzodiazepines, but they're generally not seen as effective in depressives; but, as one of the Penn State scientists told the press, "our research suggests that GABA is involved and that there must be other reasons for the failure of benzodiazepines." If science can figure out a way to fiddle with GABA levels in humans using a viable mechanism, we might have a new antidepressant on our hands, and that's always a good development considering the problem of treatment-resistant depression.

We May Be Able To Cure Ovarian Cancer With Nanoparticles

Ovarian cancer is one of the most lethal of the cancers that attack the female body; the American Cancer Society estimates that around 14,000 American women will die of it in 2016 alone. Fortunately, though, a new therapy tested in mice might give hope to women with diagnoses and those who look likely to inherit it. The therapy, tested by the Georgia Institute Of Technology, combined traditional chemotherapy with the use of nanoparticle technology. A nanoparticle "pill" was given to four mice with ovarian cancer, and was able to target one of the things that signals malignant growth in cancer cells.

The process targeted proteins called epidermal growth factor receptors (EGFRs), which are often responsible for setting off the horrendous growth reactions in cells that create malignant tumours. The "pill" (nanohydrogel, to give its technical name) of the Georgia scientists stopped the EGFR in its tracks, disabling it on a molecular level. With the nasties unable to do any of their normal work, chemotherapy swept in and obliterated the cancerous tumours, though it's not yet clear whether they got all of them. We'll need tests on humans, but future ovarian cancer sufferers could take a nano-pill that kicks their cancer straight in the face.

We May Be Able To Protect Fetuses From Zika Virus

Zika remains an issue on the world stage, but a new antibody has given positive signs that it might be able to protect pregnant women and their children from suffering any adverse affects. And, fascinatingly, the protection they've found was discovered in the bodies of people who'd recovered from Zika.

The scientists in charge of the study isolated an antibody, with the catchy name ZIKV-117, which they thought had potential to help people — particularly pregnant women — who caught Zika. (A prominent consequence of Zika is, of course, microcephaly in babies).

And the results look pretty promising. ZIKV-117, when given to mice, drastically lowered the levels of the virus in adults, and seemed to actually protect the placentas and fetuses of pregnant mice from it. The hallmarks of Zika in fetuses, like growth problems or difficulties with blood vessels, were greatly reduced; it seems that the antibodies formed a protective wall to stop the virus getting anywhere dangerous. Several Zika vaccines are currently being tested on humans, including one with an "inactivated" virus and another with DNA injections that provoke anti-Zika antibodies. This is one of the first, though, to actually be tested on pregnant animals, so it may be one of the most useful for pregnant women if it makes it through human testing.

A New Test For HIV Uses A USB Stick

HIV testing is gradually becoming destigmatized; just this year, Prince Harry had an HIV test publicly in front of reporters to emphasize that it's not something to be afraid of. A continuing problem, however, is not in initial testing but in monitoring, as people with HIV need to test the levels of the virus in their blood to see how their medication is working and assess their condition. And a new discovery from Imperial College London may mean that, instead of needing to send a blood sample off to a laboratory, people can do it on a laptop.

The new technology, which was 95 percent accurate in tests, is composed of a specially designed USB stick with a mobile phone chip, onto which a small blood sample can be dabbed. The chip will react to the presence of the virus in the blood and relay this information to the USB, which can then transmit the information to any computer it plugs into. Instead of an average of three days, which is the current testing norm, the return time was an average of 20 minutes. This is massive for people in remote regions or without access to nearby laboratory care who need to monitor their condition accurately, and is one of the biggest breakthroughs in HIV treatments in years.

A Breathalyzer To Diagnose Diabetes May Soon Be Available

While we're talking simplified diagnosis and testing, scientists have have developed a simple new method for diabetes diagnosis that doesn't involve invasive testing or a hospital visit. Instead, it might just use a breathalyzer, like those you'd use when getting for alcohol levels by the cops.

One of the major signs of diabetes is a nail polish-like odor on the breath caused by the release of acetone, which is a side effect of the body's attempt to deal with its inability to produce insulin. And it's acetone levels that are the target of the new breathalyser developed by University of Oxford scientists; it uses a polymer that traps acetone exhaled by a patient, and can then be analyzed by laser to pick up on acetone concentrations. This isn't the first breathalyzer being developed for testing for diabetes in a doctor's office, either; back in 2013, American scientists developed another device that could measure blood glucose levels, using much of the same technology. That one was for helping diabetics monitor their condition, while this one is more about diagnosis; but both are positive steps towards quick, easy-to-understand information for diabetics without the need for a hospital trip.

Be proud of your America-based scientists today, and fight for their rights and their funding tomorrow. They are valuable, and they deserve to be protected.