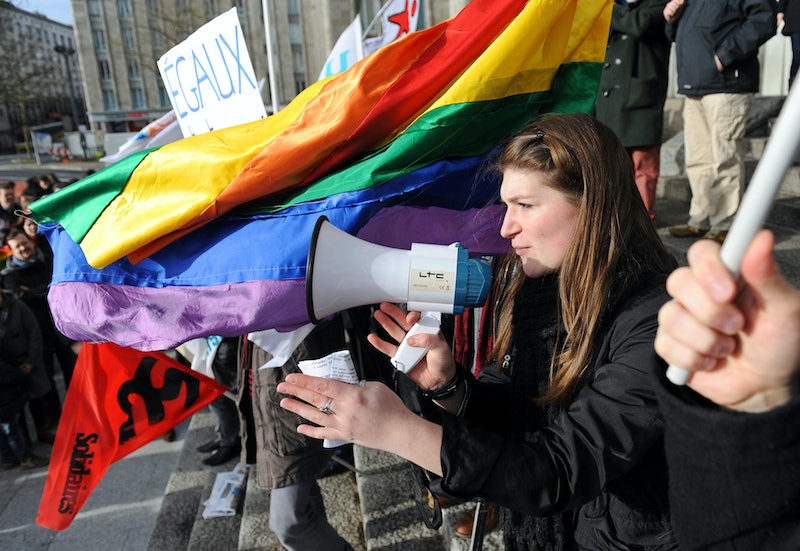 The election of Donald Trump to the presidency shocked the nation, as pundits and pollsters all predicted a Clinton win. Many Americans are experiencing everything from anxiety about their future to feeling downright threatened by a Trump administration. Given the Republican Party's regular platform, and especially Mike Pence's record, the trans community in particular senses that their progress will be targeted. In view of this coming reality, many trans individuals are seeking to immediately change their documentation before Trump takes office in January. And the Twitter hashtag #TransLawHelp is providing assistance, connecting those seeking legal guidance with lawyers in their area.

The trans community has reason to be apprehensive of what will come with Trump's presidency. Earlier this year, the Republican governor of North Carolina, in conjunction with the Republican-controlled legislature, passed a law that would force everyone to use the public restroom which matched the gender listed on their birth certificate. Known as HB2, the law was heavily criticized and has been bogged down in several lawsuits. Backlash extended on Nov. 8, as Gov. Pat McCrory, responsible for signing HB2 into law, is currently losing by a few thousand votes to his Democratic challenger, Roy Cooper. A recount has been called, but McCrory should have won his election; Republicans handily beat Democrats in North Carolina, riding on the unforeseen coattails of Trump's victory.

Lawyers are now using #TransLawHelp to offer their services and/or advice to trans individuals who are opting to get their paperwork lined up before Trump takes office. #TransLawHelp is also a way to ask questions and offer financial help to those who might need it.

But it's not just Trump causing concern — Pence is also worrisome. As Will Drabold put it in Time, "[Pence] said gay couples signaled 'societal collapse."" And he really did. The soon-to-be-vice-president is an outspoken religious fundamentalist, identifying as an "Evangelical Catholic." Pence's faith is likely a huge factor in explaining his stance on more traditional gender norms, and likely led him to oppose the Employment Non-Discrimination Act while he served in Congress. The law would have precluded businesses from discriminating against individuals based on sexual orientation. Pence, and many fellow Republicans, said it would violate the religious freedoms of business owners.

Then Pence made headlines in 2015 by signing a Religious Freedom Restoration Act (RFRA) as governor of Indiana. The measure would have made it fine for businesses to refuse service to gay customers and let corporations decide whether or not to provide insurance to LGBTQ employees. The extremity of the bill led even many in Pence's own party to reject its implementation. At The Daily Beast, Jay Michaelson pretty much summed it up: "Mike Pence ... Is Too Anti-Gay Even For Republicans."

It makes sense that the trans community feels that a Trump administration will be a unique threat to them. #TransLawHelp is one small show of solidarity, and one way to fight back.