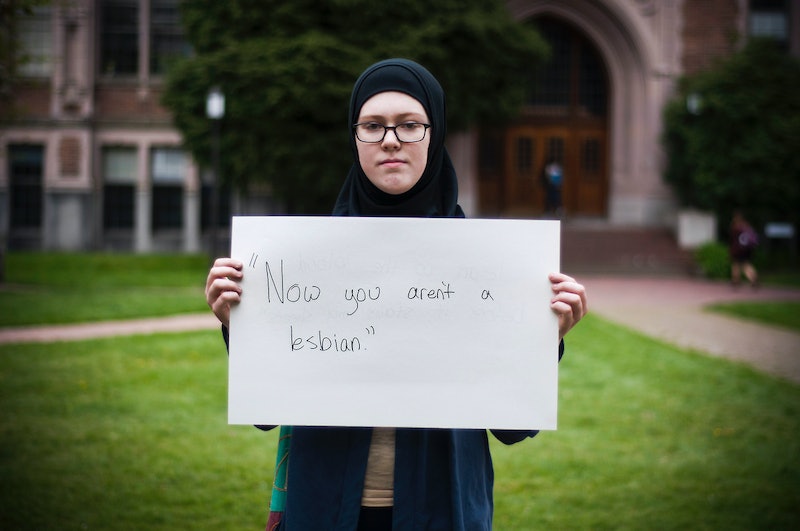 Trigger Warning: sexual assault. There are some phrases where just hearing them makes you want to take a shower; "corrective rape" is one of those. And although we like to think of it as a phenomenon that takes place somewhere else — South Africa is particularly infamous for it — the always powerful Project Unbreakable released a photo collection this week of women who have experienced corrective rape, photos taken right here in the good old US of A. That shower sounds really good right now.

Corrective rape, the act of raping an LGBT person to "turn them straight" is awful on just about every level, starting with the fact that it implies being LGBT is something that needs to be corrected, and that's obviously only the beginning of why this is so heinous. You don't hear much about it happening in the United States, but every so often a scumbag will say something in support of it, like this judge from Tennessee. Still, the general feeling seems to be that it doesn't happen here. But as these Project Unbreakable photos show, it does.

Project Unbreakable photographs sexual assault survivors holding up signs with quotes from their rapists, or sometimes other information about their assault, or both. Sometimes the quotes are short — "I love you" is heartbreakingly common — and sometimes they are long. Sometimes the women keep their faces visible, sometimes they don't. But every photograph is powerful.

More like this
10 Times Boris Johnson Got It Wrong On Trans Rights
By El Hunt and Sam Ramsden
All The Astrological Events Happening In June
By Nina Kahn
Here's Your Daily Horoscope For May 25, 2022
By Mecca Woods
4 Zodiac Signs Least Affected By The May New Moon
By Brittany Beringer
Get Even More From Bustle — Sign Up For The Newsletter