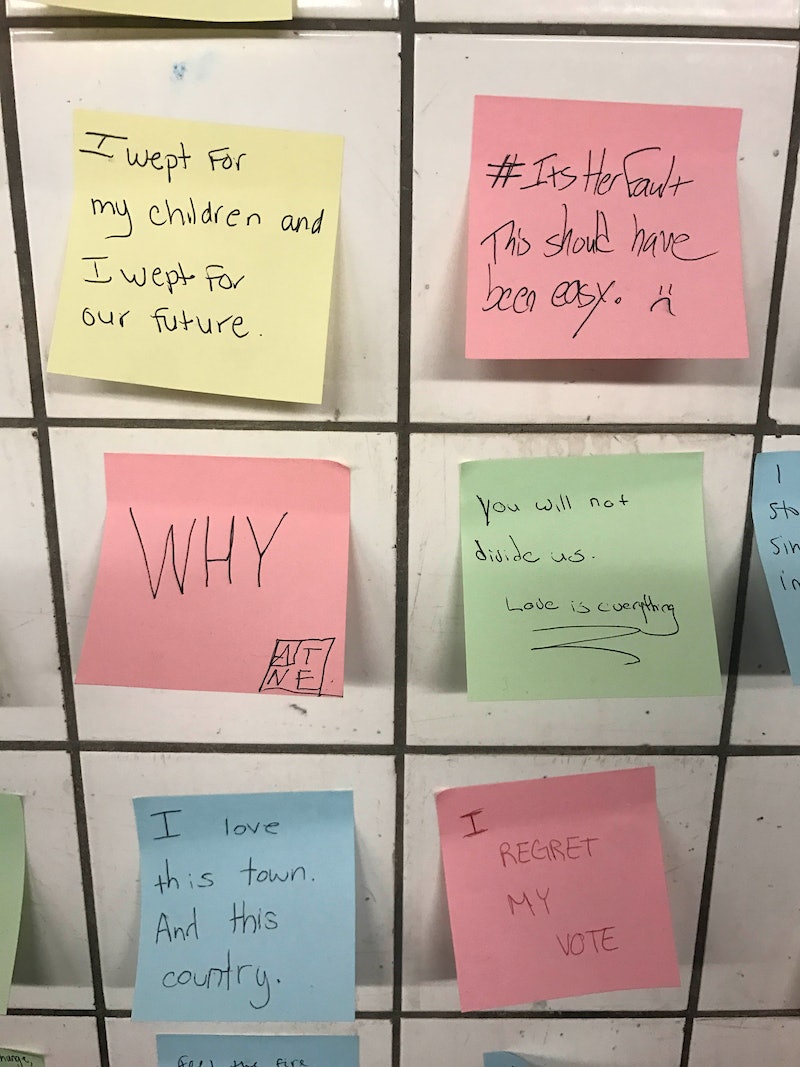 On Wednesday night, as the nation grappled with the shock of Donald Trump becoming its new president-elect, New Yorkers left Post-It messages in the underground tunnel of the Union Square subway station expressing their thoughts and feelings about the result. Above the tunnel, large crowds protested President-elect Donald Trump in Union Square, as did crowds elsewhere in Manhattan and in at least a dozen states across the U.S. "I regret my vote," read one; "WHY," read another. A third: "You will not divide us. Love is everything."

Next to the wall of underground Post-Its, commuters found a small table littered with colored Post-Its, pens, and the words "Subway Therapy." According to ABC 7, who spoke to Levee, the artist who created the project, "Subway Therapy" was designed to help people get things off their chest. According to the project's official website, Levee organizes various forms of "Subway Therapy" across the city. "For the last several years I imagined going outside with a table and chairs to talk to people. I don't know why, but that was always something I wanted to do," Levee noted on the website.

Of the Union Square-specific project, Levee told ABC 7: "Because of how stressful the last couple of days were, I thought it would be nice to have something that people could do really quickly so they could maybe get something off their chest ... Today is kind of a special edition because of the frustrations and stress it seems like people will have. So I brought the Post-Its and I thought it’d be interesting to see everyone’s thoughts up on the wall. It’s been really beautiful."

New York is an almost entirely blue state, and many of the Post-Its focused on anger and frustration. "#ItsHerFault," wrote one. "This should have been easy."

"You are loved," read another Post-It.

Others included: "This is just a test! We will pass!"; "I'm genuinely very scared for my black/Latino/Latina/Muslim/LGBT brothers and sisters"; "How do we heal?"; "I'm freaking ANGRY!"; "Love will always trump hate,"; and "He can't take away our choice to be kind. Hang in there."

By Thursday morning, the Post-Its were gone. No trace remained of the project.