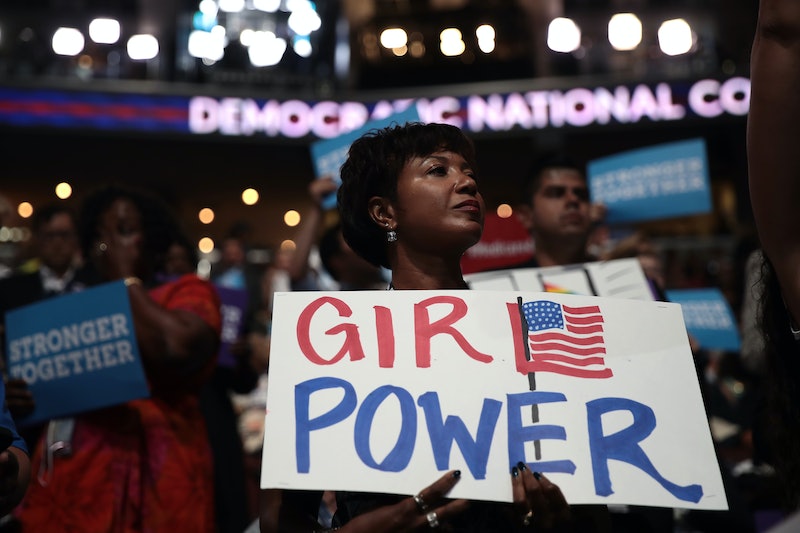 If you’re still reeling from this week’s presidential election, if you’re wondering where it all went wrong, and how to understand a Trump presidency, you’re among many. Our responsibility now is fight to back, donate to causes that need our help, subscribe to newspapers to take a stand for free press, volunteer at local, state, and federal levels, and read books from a wide variety of perspectives — including these inspiring feminist memoirs that will motivate you to take action and help you heal.

If you’re a woman, a voter, a feminist who spent Tuesday evening in tears, I was there with you. If you started crying again in the early hours of Wednesday morning, you weren’t alone. If Thursday began with a gnawing ache in your heart and stomach that only grew as the day went on, I know exactly how you felt. Maybe you were surprised by the depth of your emotions — I know I was. We believed we lived in a world where women’s voices were being both heard and valued, where bullies never prospered, where women were free to become more open and active about fighting against acts of sexual violence, and where love and hard work always defeated bigotry and fear-mongering — and the rug was pulled out from under us on Election Day as we watched vote after vote after vote being counted in the wrong direction.

One of the unrelenting truths of my life is that even at some of the darkest, most difficult hours, when my faith in myself and my fellow humans has been challenged to the limit and my heart is broken, books have lit my way back towards the path of compassion, hope, and empowered action. My hope now is that the feminist memoirs on this list — filled with stories about women who rose up, broke ranks, challenged the status quo, weren’t afraid to get a little rowdy, and wholeheartedly followed the righteous feminist paths of their own making — with inspire you as much as they have inspired me.

So here is your post-election, feminist reading list: 16 memoirs written by empowered women, to help heal your wounded, feminist heart.

Joy Harjo grew up in an Oklahoma landscape that resonated with the history of the Trail of Tears, and grappled with an abusive stepfather, a teenage pregnancy, and single motherhood. Through it all, she pursued her art and discovered her own empowered voice as one of the most transformative poets of our time. Her memoir, Crazy Brave, is the story of how she got there.

On March 16, 1970, Lynn Povich and 45 of her female peers at Newsweek filed an Equal Employment Opportunity Commission against the magazine for discriminating against the women who worked at the magazine. The Good Girls Revolt: How the Women of Newsweek Sued their Bosses and Changed the Workplace chronicles their journey from “well-mannered women” to activists, and demonstrates the power of women joining together and fighting hard for what is right.

The woman who started out as a child model and television star tells the story of her journey from the days when she was labeled by the media as “The Ideal American Girl” to discovering her own feminist voice: as a poet, as a bisexual, as a mother, as a civil rights activist, and as a voice for women all over the world. Saturday's Child: A Memoir by Robin Morgan is personal, political, and empowering.

4. When Heaven and Earth Changed Places by Le Ly Hayslip

Le Ly Hayslip was 12 years old when U.S. helicopters landed in her tiny village in central Vietnam, and as the violence around her increased, she — as many young children were — was recruited to act as a spy. As we see in When Heaven and Earth Changed Places: A Vietnamese Woman's Journey from War to Peace, she was starved, tortured, raped, imprisoned, and witnessed the death of many members of her family. From the ashes of such devastation rose a woman determined to make a better life for herself in the United States, while growing to understand the myriad ways her own country betrayed her and broke her heart.

5. The Woman Who Watches Over the World by Linda Hogan

Linda Hogan is an award-winning Chickasaw poet and novelist, and her book The Woman Who Watches Over the World: A Native Memoir, tells the story of her life — daughter of an Army sergeant, lover to an older man, alcoholic, and adoptive mother — while exploring the emotional history of her Native people, and how the devastation of her ancestors has informed her own future.

6. Life in Motion: An Unlikely Ballerina by Misty Copeland

As the first African-American soloist dancing with the prestigious American Ballet Theatre, Misty Copeland knows what it takes to fight for the right to have your identity recognized and celebrated. Her memoir, Life in Motion: An Unlikely Ballerina, is the true story of her unprecedented talent in the ballet world, and the amount of heart and perseverance it took to dance her way past everyone who said her identity conflicted with that of a professional ballerina.

7. The Glass Castle by Jeannette Walls

The Glass Castle begins when the author, Jeannette Walls, sees her homeless mother rummaging through a dumpster on the streets of New York City. Walls does not stop to talk to her. In this infuriating-as-it-is-empowering memoir, Walls describes her unpredictable and bohemian upbringing — her parents’ irresponsibility, their violence, their inability to commit to the project of parenting, their stubbornness, and, as Walls ultimately comes to understand, their imperfections deserving of compassion. This memoir is all about testing the limits of forgiveness and survival, faith and love, power and strength.

8. Heartbreak: The Political Memoir of a Feminist Militant by Andrea Dworkin

Andrea Rita Dworkin knows a thing or two about being eviscerated for fighting against the status quo. She was a radical American feminist and anarchist who dedicated her life to dismantling the patriarchy, fighting against pornography and other forms of sexual violence, and working for social justice for women in the United States and all over the world. Brilliant and extreme, her words are so very necessary right now.

9. Leaving Before the Rains Come by Alexandra Fuller

Alexandra Fuller’s Leaving Before the Rains Come meets the author as myriad things in her life are falling apart — her marriage, the American economy, her understanding of herself as the young woman she used to be versus the woman she grew into later in life. Using a quote her father often said — "The problem with most people is that they want to be alive for as long as possible without having any idea whatsoever how to live" — as her inspiration for making some serious changes in her life, Fuller takes pause here to reconnect with her deepest self, and then works to reinvigorate her own, authentic voice.

10. An Autobiography by Angela Y. Davis

Angela Yvonne Davis is an American political activist, scholar, and author who, as an activist in the 1960s and 1970s, became a leader of the Communist Party USA, worked with the Black Panther Party, participated in the Civil Rights Movement, advocates for prison reform and prisoner’s rights, researches and writes about feminist politics and women’s rights — among tons of other political and activist endeavors. Her autobiography tells the story of her years as a young activist, and the endurance it took to keep fighting when it mattered most.

11. A Fighting Chance by Elizabeth Warren

For many women, Elizabeth Warren was one of the biggest heroes of the 2016 presidential campaign; her no-holds-barred disdain for the orange-faced fascist, her public amusement at calmly critiquing The Donald until he lost his patience (it didn’t take long), and her defense of women’s rights, the middle class, and holding big banks accountable for their wrongdoings have put her front-and-center in many women’s hearts and minds. Her memoir, A Fighting Chance, describes the hard work she has already done, and the difficult work (seriously, so much difficult work) that is left to be done.

12. My Life on the Road by Gloria Steinem

Feminist political campaigner Gloria Steinem’s recent memoir, My Life on the Road, gives readers a front-row seat to her lifelong journey of fighting for equality, working for justice, and building the unbreakable bonds of political sisterhood along the way. If you ever doubted the jagged path to female equality, My Life on the Road will remind you to keep walking on towards justice.

Author, columnist, and co-founder of Feministing.com Jessica Valenti is a complete badass. Following an election season where sexual violence against women appeared center stage — and then promptly, devastatingly, played no role whatsoever in the outcome — Valenti’s memoir Sex Object will help you start to re-navigate your own sexuality, while reminding you of all the ways that sexuality is influenced and informed by modern sexism.

No number of re-reads will be too many when it comes to diving headfirst into Cheryl Strayed’s memoir Wild: From Lost to Found on the Pacific Crest Trail, which is literally about her walking, clawing, and fighting her way to her most empowered self in the wake of heartbreak. Cheryl Strayed has become a champion and a voice of wisdom to feminists, and we need voices like hers to keep rising now.

15. Daring: My Passages by Gail Sheehy

Gail Sheehy paved the way for female journalists everywhere, infiltrating the “mans’ world” of journalism in the 1960s, when she worked as a political profiler, reported from the forefront of political and social issues, and dared to put herself in places dangerous for anyone — but especially for a woman — in order to get important stories told.

Just because she hasn’t been named president-elect doesn’t mean HRC can’t continue to inspire you and help inform your understanding of women’s roles in American and global politics. Her memoir, Hard Choices, details the challenges she faced as America’s secretary of state, and the lessons she learned about making difficult decisions, dealing with failure, and always going high.