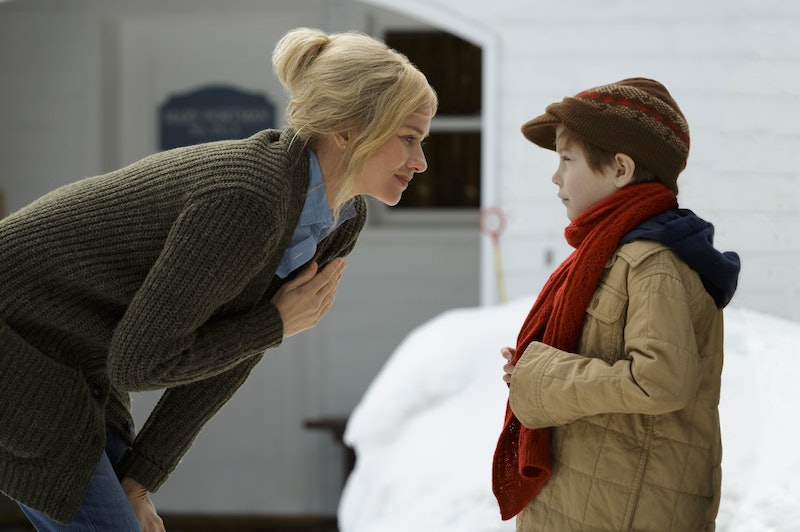 Psychological thrillers, while not always classified as horror films, can sometimes be among the scariest movies around. And if you add in the element of a creepy kid to the mix, then you really have something that's truly terrifying. That's case in Shut In, a new film about a New England psychologist (Naomi Watts) who, while caring for her paralyzed teenage son, becomes attached to one of her orphaned young patients (Room's Jacob Tremblay), whom she takes in. But after a vicious winter storm isolates her home and the boy disappears in the midst of it, strange things start happening around the house. But is Shut In based on a true story at all?

It's not. While the idea of a powerful rural New England winter storm cutting someone off from society is certainly plausible (source: I grew up in Maine), the film itself is a complete work of fiction. The movie was written by screenwriter Christina Hodson, a rising star on the scene who has already made an impact on Hollywood. For many screenwriters, their big break occurs when a script they've written appears on The Black List; a highly competitive listing of the best unproduced screenplays in Hollywood. Hodson has appeared on this list not just once, but three times in a row — each time with a different script.

In 2012, Hodson's script for Shut In appeared on The Black List. The next year, she made the ranking again with her script Seed . Then in 2014, her script for the female-led sci-fi flick, The Eden Project, landed on the list. Three straight years on The Black List with three different scripts is an extraordinary and rare feat for a writer to accomplish — writing a good screenplay is both difficult and time-consuming — yet Hodson was able to do it. Not only that, but she has somehow found the time to work on even more projects while doing so.

The busy writer co-wrote the thriller Unforgettable, which is scheduled to hit theaters in April with a cast that includes Rosario Dawson and Katherine Heigl. Also, in 2015, Hodson was hired by Warner Bros. to write a reboot of '90s blockbuster The Fugitive, and she was brought on by Paramount Pictures as the first woman (along with fellow hire Lindsey Beer) to work on the Transformers franchise as a writer, and was soon tapped to write a standalone spinoff of the series, to be released in 2018. In her brief but wildly successful career, Hodson has made a name for herself not only as a very prolific and talented writer, but as one who generally centers her films around strong, female characters in genres (thriller, sci-fi, action) where those roles usually go to men.

Shut In may not be based in reality, but it sprang from the mind of one of the most talented and hardest working new screenwriters on the scene. And with films written by women still being a rarity in Hollywood, the snowballing success of Christina Hodson could pave the way for more female screenwriters writing female-led films in the years to come.

More like this
The 'Spiderhead' Movie Ending Is Nothing Like The Short Story It’s Based On
By Morgan Leigh Davies
'My Name Is Leon' Is Based On Kit De Waal’s 2016 Novel
By El Hunt
16 Novels That Paint A Realistic Portrait Of Abortion
By K.W. Colyard
15 Intriguing Movies On Netflix That Are Based On True Events
By Mary Kate McGrath, Shannon Barbour and Grace Wehniainen
Get Even More From Bustle — Sign Up For The Newsletter