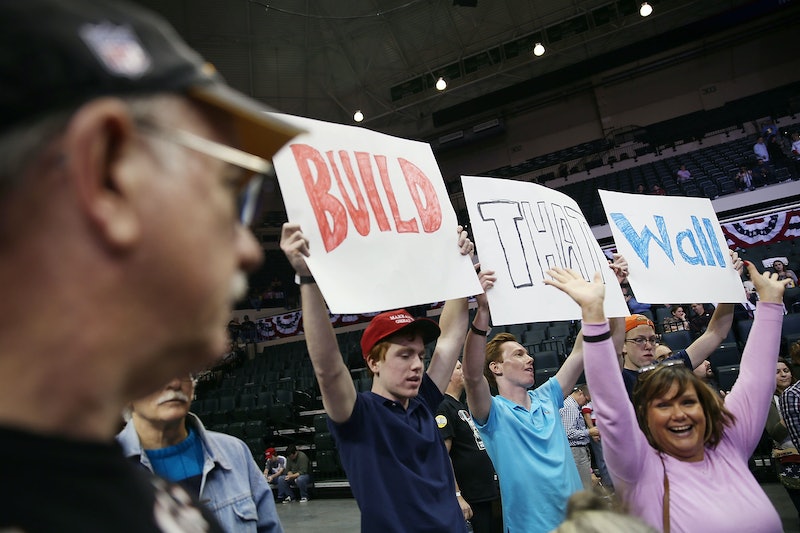 It's been less than a week since America elected a new president, but there have already been multiple reports of Donald Trump supporters assaulting Muslims and other minorities. Sadly, female Muslim students in at least three different universities have reportedly had their hijabs ripped off their heads. In the case of a University of Louisiana at Lafayette student, the attack was reportedly violent.

“The victim said the suspects hit her with something metal, which made her fall to the ground,” said a spokesperson for the school. "The two individuals hit the victim while she was down and made obscene comments. The two suspects then took the victim’s head wrap [hijab] and wallet.” The men who allegedly assaulted her were reportedly wearing pro-Trump hats.

A multitude of similar incidents were shared on Facebook throughout the day: In Indiana, a black woman wrote, "One [white man] walked over to me and said ‘how scared are you, you black b*tch? I should just kill you right now, you’re a waste of air.'" Another woman wrote, “I was harassed by an older white man who presumed I was Mexican. [He said]: ‘I can’t wait until Trump asks us to rape your people and send you back over the biggest damn wall we’re going to build. Go back to hell, wet back.'"

Trump's infamous "grab them by the p---y" line reportedly made its way into several sexual assaults against women. Members of the LGBT community have also found themselves being targets of violence. A man in Santa Monica was reportedly brutally attacked as he left a bar on election night by a group of people shouting homophobic slurs. "They were saying things like ‘We got a new president you f*cking faggots," he told Calgary Metro News.

Opponents of Trump worried throughout the election that his inflammatory comments about Latinos, Muslims, and women would lead to a rise in hate crimes and blatant bigotry across the country.

Journalist Jorge Ramos documented a nine-month journey across the United States to see how Trump's rhetoric was emboldening white supremacist groups in the film Hate Rising, and the footage shows the chilling effect our new president-elect was indeed having on a portion of his followers.

Unfortunately, it looks like Trump's victory is leading to an increase in exactly the kind of violence many feared. He even failed to denounce the same kinds of acts by some of his supporters during the election. His response to the beating of an immigrant man by a few of his voters, for example, was to label them "passionate" — but let's hope he does things differently now that he got what he wanted on Election Day. In the meantime, let's continue to hold him accountable.