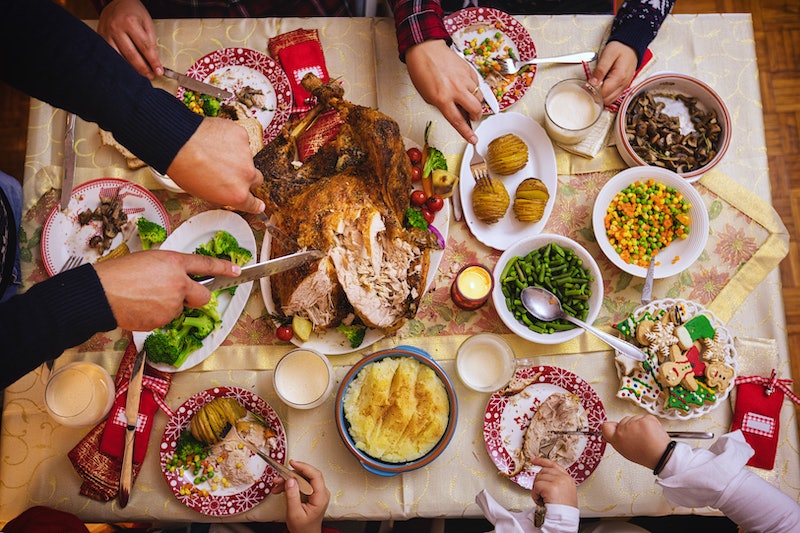 If there's anything that does the soul better than a full belly of turkey, cranberry sauce, sweet potato casserole, and biscuits, it has to be a good laugh. These 12 funny Thanksgiving quotes for 2016 know exactly what I mean, and they capture the hilarious spirit that is behind so much of a day devoted to stuffing a turkey's butt, overeating, and listening to your aunt complain about the candied yams. Simply put, Thanksgiving traditions are a little bit funny... you have to admit it.

If you need an extra laugh or two on November 24, then look no further, because Johnny Carson, Jim Gaffigan, Roseanne Barr, Jay Leno, and Howie Mendel, among others, know just what to say about Thanksgiving Day. Lighten the mood at your own Thanksgiving get-together if your family is beginning to drive each other bonkers with one of these quotes, or, if you've ended up drying out the turkey and burning the biscuits. The food may not be salvageable, but that doesn't mean the day can't be spent in smiles.

Spend this Thanksgiving enjoying each other's company and having a good laugh or two at the holiday's expense. Remember, Thanksgiving might only happen once a year, but it's still one of the most iconic American days on the calendar. Have a little fun with it.

2. "Thanksgiving is an emotional time. People travel thousands of miles to be with people they see only once a year. And then discover once a year is way too often." — Johnny Carson

3. "Here I am 5 o'clock in the morning stuffing bread crumbs up a dead bird's butt..." — Roseanne Barr

4. "Even though we’re a week and a half away from Thanksgiving, it’s beginning to look a lot like Christmas." — Richard Roeper

5. "Personally, I love Thanksgiving traditions: watching football, making pumpkin pie, and saying the magic phrase that sends your aunt storming out of the dining room to sit in her car." — Stephen Colbert

6. "It took me three weeks to stuff the turkey. I stuffed it through the beak." — Phyllis Diller

7. "If you stand in the meat section at the grocery store long enough, you start to get mad at turkeys. There’s turkey ham, turkey bologna, turkey pastrami. Someone needs to tell the turkey, man, just be yourself." — Mitch Hedberg

8. "I’m from Canada, so Thanksgiving to me is just Thursday with more food. And I’m thankful for that." — Howie Mandel

10. "You can tell you ate too much for Thanksgiving when you have to let your bathrobe out." — Jay Leno

12. "I come from a family where gravy is considered a beverage." — Erma Bombeck