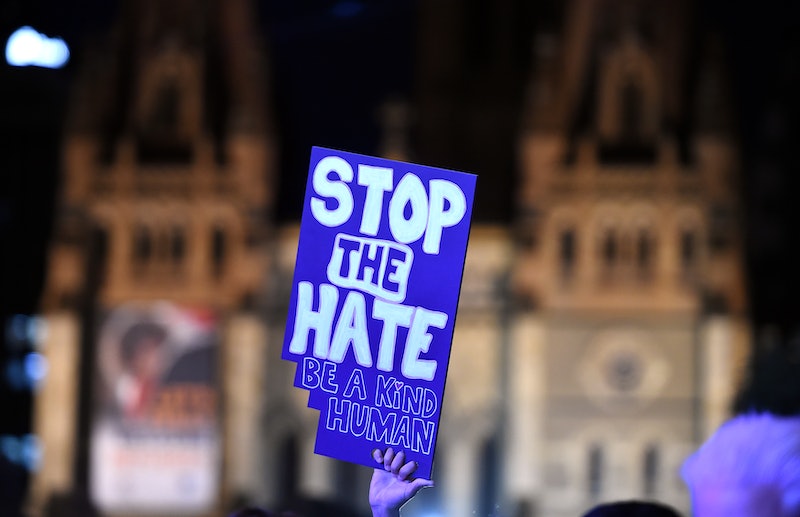 As reports of hostilities against various marginalized groups following the election of Donald Trump to the presidency continue to emerge, Americans are calling on each other to don safety pins on their shirts to indicate to others that they are an ally. While it is regrettable and sad that we have seemingly reached a point where it is necessary to indicate to others that we stand by them and respect their rights (as opposed to it being a given), it is comforting to see Americans taking a stand to make sure their fellow citizens feel safe and secure.

The initial idea for pinning a safety pin on one's shirt to indicate you are an ally to anyone who feels threatened or marginalized stemmed from a similar campaign in Britain that took place following the Brexit vote to leave the European Union. The vote helped spark a substantial number of xenophobic attacks and abuse. In response, the safety pin campaign was started on Twitter as a way for fellow Britons to easily and publicly let others know that they are a "safe person," an ally for anyone feeling threatened or unsafe. In addition to wearing their pins in public, Britons also posted pictures of themselves wearing their safety pins on social media as a means of furthering solidarity and delivering a unified, anti-hate message.

Much like the post-Brexit climate in Britain, the post-Trump election climate in the United States has unfortunately already been rife with reports of attacks on and abuse of minorities, Muslims, and women, among others. These attacks range from a Muslim student in San Jose being attacked by a man who tried to pull off her hijab to incessant verbal and physical abuse of African-Americans in various states, among many other incidents. Trump's election, and the vitriolic rhetoric he used throughout his campaign, have seemingly emboldened some Americans to commit awful, xenophobic acts against women and religious and ethnic minorities.

This egregious uptick in violence and abuse is obviously not reflective of American values or democracy (or human decency, for that matter), and, similar to Britons post-Brexit, Americans are trying to find ways to combat this abuse and help others feel safe.

While it is saddening that the need for such a campaign presently exists in the United States, it is encouraging to see Americans taking a stand for each other. Hopefully, the safety pin campaign and its message will continue to expand its reach, and help to counteract the unacceptable treatment of minorities, allowing people who may currently feel disempowered or insecure to feel empowered and protected once again.